​ASUS launched the ROG Phone in 2028, the company’s first gaming smartphone under the ROG brand. There are now several competing gaming smartphones on the market from Black Shark, Nubia’s Red Magic, and Vivo’s iQOO. Each of these brands offers powerful hardware and useful gaming features at a compelling price, but ASUS stands out from the pack with its no-compromise philosophy toward features. The ASUS ROG Phone 3 is the king of gaming smartphones, but it’s also just a very good smartphone overall, even without gaming. 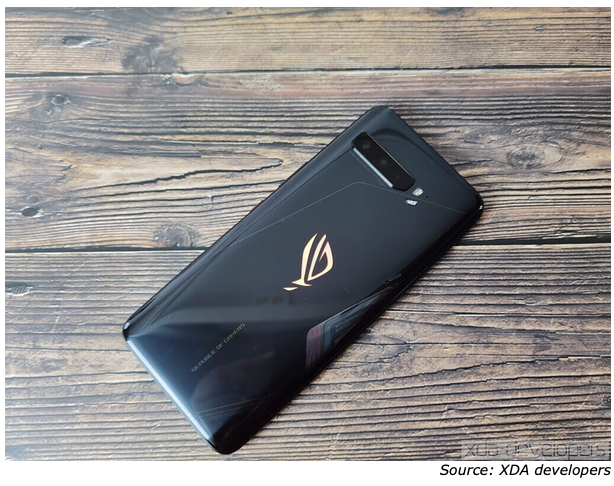 The rear is still made of glass, but the cover for the vent takes up much less space than before. There are fewer etched lines underneath the glass back, too. One part of the design that isn’t as subdued is the ROG logo, which is now a deeper white when the RGB Aura Lighting is turned off. The left and right edges on the rear still have a subtle curve to them to facilitate holding the phone in your hand.
The aluminum frame is easy to grip, which has the added bonus of making the AirTrigger gestures easier to perform. The horizontal camera bump is also well-designed, with the bump around the tertiary macro camera aligning with the diagonally-etched line underneath the glass. This etched line runs between the two LED flashes and sits below the microphone hole that I presume is used for the new audio-related enhancements in the camera app. Overall, the ROG Phone 3 looks unique compared to the dozens of similarly-designed BBK smartphones that have flooded the market in recent months. The ASUS ROG Phone 3 remains  a massive phone. It’s taller than both the OPPO Find X2 Pro and the Samsung Galaxy S20 Ultra, while having a smaller 6.59″ screen size. The top bezel has a single 24MP camera, proximity sensor, and other components. The ROG Phone 3 is also thicker and heavier than the OPPO Find X2 Pro and Samsung Galaxy S20 Ultra. It’s thick and heavy out of necessity, though, as it has a massive 6000mAh battery to provide 1 day of very heavy usage or 2 days of moderate usage. The device isn’t too wide, though, yielding a 19.5:9 aspect ratio. On the bottom, is a USB 2.0 Type-C charging and data port.  The ASUS ROG Phone 3 has a large 6.59″ AMOLED display at 2340×1080 resolution for a 19.5:9 aspect ratio. Because of this aspect ratio, most video content won’t fill the whole display. That’s typical of smartphones as the viewable area is so large that the video watching experience doesn’t really suffer. There’s no notch or hole-punch cutout, either, so any content that can fill up the whole screen will fill up the whole screen without interruption. The display supports a maximum refresh rate of 144Hz, with 120Hz, 90Hz, and 60Hz as additional options. The phone’s default “auto” refresh rate mode isn’t a true variable refresh rate implementation (no smartphone on the market currently supports that). Rather, the Android System decides when to switch between the various preset display modes. Since there aren’t any resolution options, that means there are 4 different display modes: 2340×1080 @ 144Hz, 2340×1080 @ 120Hz, 2340×1080 @ 90Hz, and 2340×1080 @ 60Hz. The “auto” mode typically favors keeping the device at the 144Hz refresh rate mode since that provides the smoothest possible experience for the user.  The ROG Phone 3 isn’t the first smartphone on the market with a 144Hz maximum refresh rate, but it’s one of the few that is able to maintain this refresh rate without a ton of micro stutters. The phone also has the battery capacity to compensate for the toll that the 144Hz refresh rate takes on the battery life. After all, a display at 144Hz has to draw 2.4 times as many frames per second as a display running at 60Hz, which means more power is needed from the display processing unit and GPU. The Samsung Galaxy S20, for example, has its 120Hz refresh mode disabled out-of-the-box for power consumption reasons.

The ROG Phone 3’s display has been calibrated to an average dE < 1 accuracy and is HDR10+ certified, meaning it can reproduce 1.07 billion colors. The display supports 113% of the DCI-P3 color gamut, per ASUS. Pixelworks is used to calibrate each display mode separately, the auto/144Hz modes will be the one that most users experience. The display reaches up to 650 nits outdoors, according to ASUS. It’s readable, but other smartphones like the OnePlus 8 Pro get far, far brighter outdoors. On the flip side, the phone can get comfortably dim. ASUS says the device has received Low-Blue-Light certification from TÜV Rheinland, which basically just means that the display’s blue light emission is less likely to cause eye fatigue.
​
For high-quality video content, the ASUS ROG Phone 3 supports L1 of Google’s Widevine DRM meaning t supports HD video playback in apps like Amazon Prime Video and Hotstar, among others. Netflix has also certified the device for HD video playback, though the app’s “playback specification” page reports that the device does not support HDR video. Another key aspect of the display, especially when it comes to gaming, is the touch sampling rate. This is the rate at which the screen reports the position of a touchpoint. The higher the touch sampling rate, the more likely that a tap is immediately registered and processed. This is important for fast-paced games where you want as little latency as possible between your taps and actions being performed in-game. On the ROG Phone 3, the touch sampling rate is 270Hz, meaning the screen reports a touchpoint 270 times per second. Furthermore, ASUS has optimized the touch data pipeline and Android framework to reduce the touch latency (the time between the tap being registered by the screen and then being processed by the OS) down to 25ms. The slide latency, which is similar to the touch latency but for swipes, has been reduced to 18ms. ASUS claims these figures are the lowest of any smartphone on the market.

Lastly, the ROG Phone 3 has an optical under-display fingerprint scanner.
Many smartphones use the latest Qualcomm Snapdragon chipset, a high refresh rate display, and huge amounts of RAM. ASUS is a pioneer of gaming features on Android, and the ROG Phone 3 is loaded with them.
​
Finally, AirTrigger gestures can be set up for the game being played. The ROG Phone 3 has ultrasonic sensors around the aluminum frame that can detect presses and swipes. This technology is from a company called Sentons that specializes in making virtual buttons for smartphones. The ROG Phone 3 is the first smartphone to make use of Sentons’ new SDS Gaming Bar technology. In games these Air Trigger gestures can be mapped to taps, swipes, slides, and continuous presses onscreen.