Although the phone is ostensibly for the 1.6 million members of the Snapdragon Insiders program (which is a bit like Microsoft's Windows Insider early-access scheme), it'll be more broadly available by August. The Smartphone for Snapdragon Insiders harnesses Qualcomm's Snapdragon 888 5G chipset (but not the latest Snapdragon 888+). It has a 2.84 GHz octa-core processor and the Adreno 660 GPU. It has what Qualcomm describes as "the most comprehensive support for all key 5G sub-6 and mmWave bands" of any device, along with WiFi 6, WiFi 6E support with speeds of up to 3.6 Gbps and 16GB of LPDDR5 memory and 512GB of storage. The 6.78-inch AMOLED display from Samsung has a 144 Hz refresh rate, which could help make it a solid gaming phone. The screen has up to 1,200 nits of brightness and it's HDR10 and HDR10+ certified. The phone has three rear cameras: a 64MP main lens, 12MP ultrawide camera and 8MP telephoto. The array can capture video in up to 8K. The device also has a 24MP front camera and AI auto-zoom. Qualcomm says this is one of the first phones to support Snapdragon Sound, which has features including low Bluetooth latency, listening profiles, active noise cancellation (ANC) and high-resolution audio support up to 24-bit 96kHz. Along with stereo speakers, the phone comes with Master & Dynamic true wireless ANC earbuds and a charging case for them. 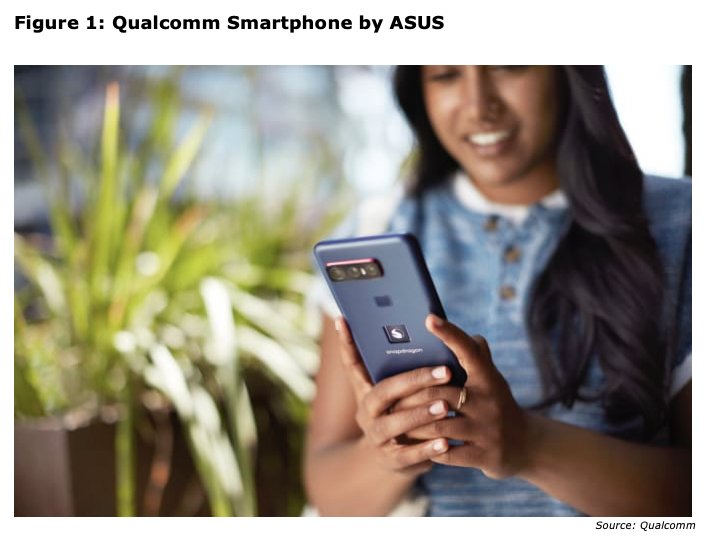 There's also Qualcomm Quick Charge 5 support, which should charge the 4000mAh battery up to 70 percent of capacity in half an hour or fully in 52 minutes, according to the company. In addition, the phone has dual SIM slots, and it runs on stock Android 11. The device draws from previous ASUS smartphones. It pulls from the ROG Phone 5's body design and the Zenfone 8 Flip's camera module. Still, it's a showcase for Qualcomm's mobile tech. The company is facing some challenges on the mobile processor front, with many phone makers working on their own chips. Showing off its knowhow with its own smartphone seems like a solid idea for Qualcomm. That way, it can perhaps remind people what it can do.

The ASUS-designed Smartphone for Snapdragon Insiders will initially be available in a few countries, including the US, UK, Japan and South Korea. It'll arrive in India later. You'll be able to buy the $1,499 device at Asustek’s eShop and other retailers.

Officially called the Phone for Snapdragon Insiders, Qualcomm’s first phone is actually less of an iPhone or Galaxy rival and more of a showcase for Qualcomm tech designed for Qualcomm’s social media audience—specifically the ones following the various Snapdragon channels across the world. That’s a pretty small group, and while Qualcomm claims it has around 1.6 million Snapdragon Insiders across the world, those numbers don’t seem quite as impressive when you consider Apple’s Twitter account alone has 6.4 million followers, despite having never actually posting a real tweet. (All of Apple’s “tweets” are technically paid ads, so they don’t show up as tweets or replies in its Twitter timeline.) Meanwhile, the Samsung Mobile Twitter account has more than 12 million followers.

Qualcomm’s Snapdragon phone is going to cost a whopping $1,500, which is more expensive than any non-foldable phone available from either Samsung or Apple. The phone includes a Snapdragon 888 processor (not the newly announced Snapdragon 888+) along with a 2448 x 1080 6.78-inch AMOLED display with a 144Hz refresh rate, 16GB of RAM, 512GB of storage, and a 4,000 mAh battery. There will also be a 24-MP selfie cam in front and three cameras in back: a 64-MP main cam, a 12-MP ultra-wide cam, and an 8-MP telephoto cam with a 3x optical zoom, which can be used simultaneously to record both pictures and videos. Qualcomm is also looking to show off its Snapdragon Sound and fast wireless connectivity, which means the phone also supports Wi-Fi 6 and Wi-Fi 6E along with some of the widest mobile data support available on any phone. And of course, the Snapdragon phone is compatible with all the major varieties of 5G.