IDC reported that despite the shortages, Facebook’s volume grew 207.4% Y/Y as the company’s latest VR headset (Quest 2) remained immensely popular due to the lower price point and the need to game/socialize during the pandemic. Outside of Oculus, Chinese companies DPVR and Pico also performed well during the quarter as the companies grew 108.6% and 44.7% respectively. Each of the companies already has a strong foothold in China and are working to grow their international presence by catering to the commercial segment. Moreover, short term outlook for these companies bodes well as they address the need for lower cost headsets with 3 Degrees of Freedom (DoF) while also transitioning a portion of their userbase to more immersive 6 DoF headsets and content. Unfortunately, outside of these top 3 companies, most other VR headset makers experienced year-over-year declines due to tough competition from the top or aging product lines like the PSVR.

AR headset shipments declined 17.2% as top products like Microsoft’s HoloLens 2 now have greater availability and the Y/Y comparisons are tough since there was plenty of pent up demand for the HoloLens 2 in Q120. IDC does not include shipments to the military in the AR/VR headset tracker excluding the recent deal signed between Microsoft and the US military. Despite Microsoft’s decline, smaller companies such as Mad Gaze and RealWear continued to make progress, and each has also succeeded at carving out its own niche. Mad Gaze continues to focus on the consumer segment while RealWear has done well in the rugged segment and continued to differentiate itself though the ability to use the headset with voice. Outside of these companies, volumes remain low as the AR market is still burgeoning.

Looking ahead, IDC forecasts VR headset shipments to grow at a limited pace in 2021 (28.9% YoY) as some of the top vendors struggle with component shortages. However, the long-term outlook remains quite strong as global shipments grow to 28.6M in 2025 with a 41.4% compound annual growth rate (CAGR). Meanwhile, AR headset shipments are expected to grow 45.6% in 2021 with a CAGR of 138% by 2025. 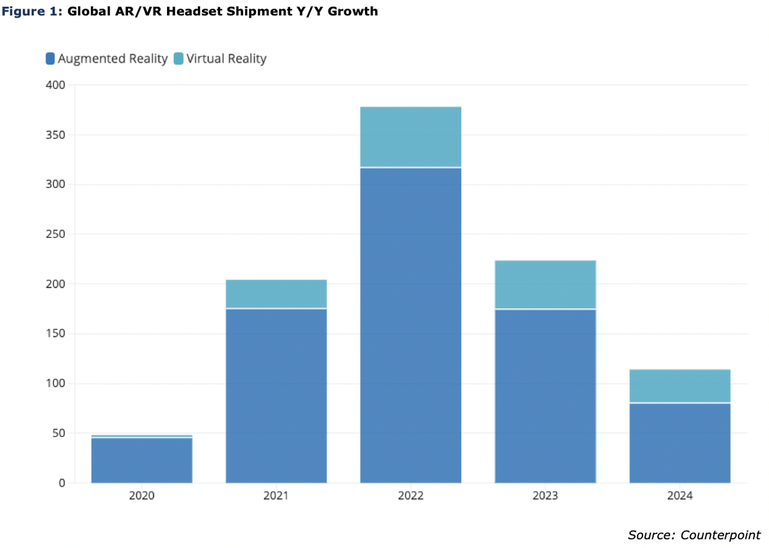 ​Facebook’s Extended Reality (XR) headset shipments almost tripled Y/Y according to Counterpoint’s Global XR (VR & AR) Model Tracker. The Oculus Quest 2 drove these volumes. Prior to Q121, the Quest 2 had shipped a cumulative 4.6 million headsets, a record for any single model. The standalone Virtual Reality (VR) form factor led the global XR market with 85% shipment share in Q121, compared to 42% in Q120. The transition from tethered to standalone VR is being driven mainly by the Quest series. The Augmented Reality (AR) segment contributed only 4% in Q121, which was driven by the few enterprise-level deals with AR headset OEMs. The AR consumer segment is still in a nascent stage as most of the compelling use cases are being satisfied by mobile AR. There is also a lack of disruptive mass-market or even mainstream AR headsets.” 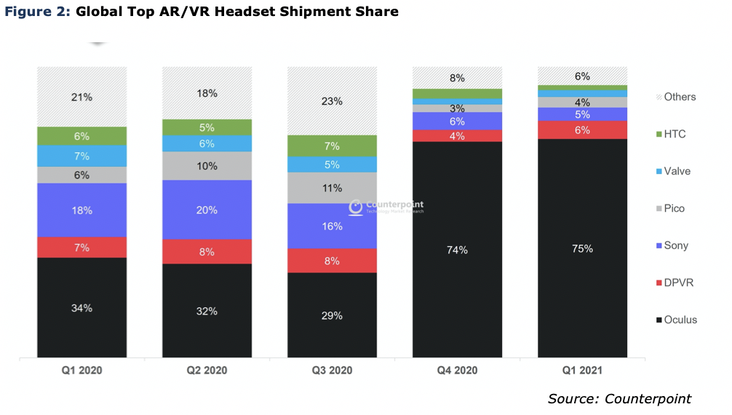 ​Oculus captured 75% share of global XR shipments in Q121 compared to 34% last year. Chinese brand DPVR climbed to the second position for the first time by keeping its focus on the enterprise and education segment. With no successor of PlayStation VR, Sony fell to the number three spot for the first time since 2016. Pico and Valve took the fourth and fifth spots respectively while HTC, with its focus increasingly limited to the niche enterprise segment, slipped to the sixth position. 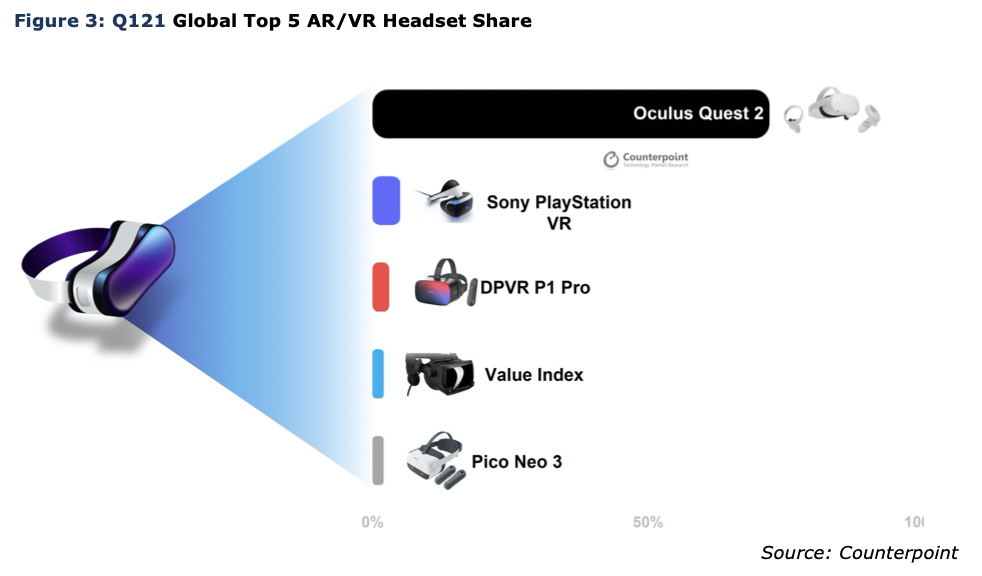 ​Given few new launches planned for 2021 by major players, the Oculus Quest 2 will reign unchallenged. It has now established itself as the leading player in the XR segment, especially gaming, and is unlikely to be replaced in the near future despite increasing competition. The Quest 2 offers a great experience in the wireless form factor, giving it an edge over competitors. However, the competition in this segment will also increase in the coming years with Sony likely to move into it. While there are many enterprise and industrial use cases for XR currently available and in development, growth in this segment is slower than expected in some areas. The industrial use cases that have greater potential include field force support, education, training, media and many more. We can, therefore, expect a steadily increasing, even if slow, trend towards enterprises and other organizations investing more in the development and use of XR devices and services, especially after 2025. Microsoft, Varjo and HTC have been taking a wider enterprise-level approach to target this low-volume, high-ASP segment. A lighter, power-efficient, and longer battery life version of Microsoft’s HoloLens offered under $1,000, combined with its strong base in major economies, has the potential to make Microsoft a major player in the consumer segment as well. But we do not expect Microsoft to launch such a device in the first half of this decade. XR is expected to experience double-digit growth for the next four years. Apple’s entry will likely catalyze the participation of several other brands, especially the Chinese smartphone OEMs that are also present in the smartwatch segment.