eMagin COO Amal Ghosh (and former SID President) presented at the DisplayWeek’ symposium providing an update on the status and requirements for AR displays. Of particular note is that despite wild speculation, the # of AR devices shipped in 2020 was ~100k. IDC forecasts a volume of 24m by 2024 together with 20m VR headsets.

The challenge for micro displays is to contemporaneously produce luminance in the range of 30,000 to 50,000 nits, a duty cycle of 10%, an FOV of 1200 a resolution of 4,000 ppi and a foveated rendering capability. Amal derived these figure of merits based on the following requirements.


Since the human eye can resolve 60 pixels/degree, a resolution of 4kx4K is required to deliver a 1200 FOV.  60*120 = 7200 pixels (~4K). The next table lists some existing products. None meet the angular vision requirements

​Ghosh then showed the current state of the art for indirect view micro displays by technology. While LCOS can be used for VR, it is a non-starter for AR. Examining the table, the primary performance differentiators between OLEDs and μLEDs are resolution and peak luminance. 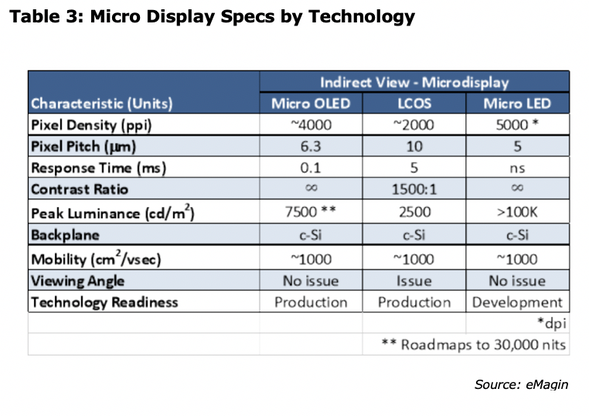 ​The state of the art for OLED pixel density is 4000 ppi with a peak luminance of 7,500 nits. eMagin’s target is 30,000 nits, close but not 50,000 nits, which would then require some combination of  a thicker lens and/or a higher duty cycle to meet the luminance requirement. A Jade Bird Display presentation at the Business Conference showed their μLED VGA blue panel with 6000 dpi (monochrome) producing 500K nits at 100% duty cycle, which if used for a full color display, w/color filter a 10% efficiency lens and a resolution of ~320 x 240 using a quad pixel would deliver 1715 nits to the eye.  The calculation assumes 70% color down conversion efficiency from blue to red/green and 70% color filter efficiency. The light loss is 49%. Power consumption is based on current density of 70A/cm2 for Jade Bird’s μLEDs. Typical 3V operation leads to power consumption of 210W/cm2, which amounts to a total power consumption in Jade Bird’s monochrome VGA display of 11W.  eMagin’s OLED at 7,500 nits is <1W.

eMagin uses a side-by-side RGB pixel format as shown in the next figure, which obviates the need for a color filter. 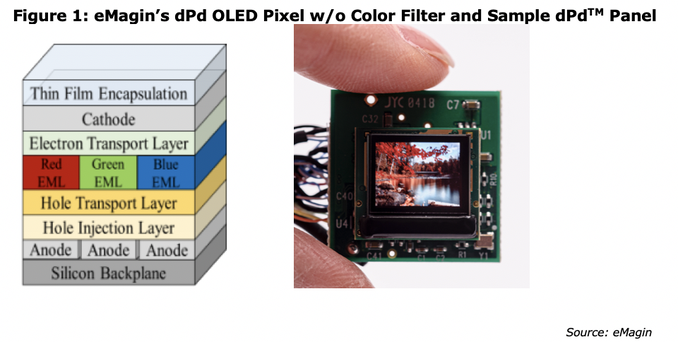 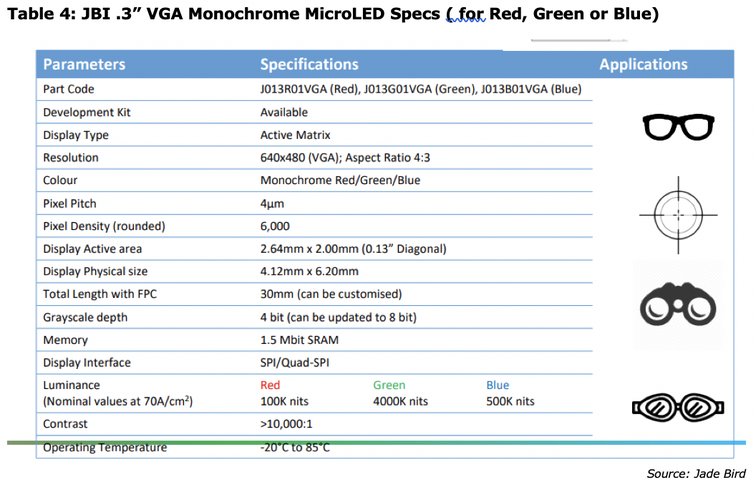