Source: Company Data
​
Apple announced its new iPhone 11, iPhone 11 Pro, and iPhone 11 Pro Max, Apple Watch Series 5 (cover in our Wearables Section), a new, 10.2-inch entry-level iPad, pricing for its Apple Arcade and Apple TV+ services last week. Like in past years, that means discounts for older models and discontinuations. Apple has lowered the starting price of its iPhone 8 and iPhone XR models by $150. The iPhone 8 and iPhone XR now start at $449 and $599, respectively. At the same time, Apple discontinued the iPhone 7, iPhone 7 Plus, iPhone XS, and iPhone XS Max.

​Source: Company
Apple's decision to skip support for 5G on its new iPhones will likely cost the company a chance at capturing China's biggest smartphone replacement wave in years. Analysts and social media reacted negatively in the region, where cheaper and feature-packed handsets from rivals Huawei, OPPO, vivo and Xiaomi are already available. Sales in Greater China, which includes mainland China, Hong Kong and Taiwan, fell 4% Y/Y to $9.61B in Q2, and followed a more than the 22% drop in the previous quarter. The entry price, combined with the lack of 5G, make the new iPhones "less attractive and future-proof" for Chinese consumers, Counterpoint analyst Neil Shah added, forecasting that Apple will sell 30M-35M iPhones in China this year, down from 63M phones in 2015.

The iPhone XR grows up to become simply the standard iPhone, while the new Pro range becomes just that, for the pros, which allows power users with the funds to match to own a phone with top level performance. On the Watch front, there is an always-on display - a game changer for Apple in my opinion - and a compass. The latter sounds dull, but means the Apple Watch can finally take on Garmin in the sports watch arena.

Services got a shout out too, with aggressive pricing for both Apple Arcade and TV+. The latter is free for all new iPhone owners, no doubt allowing Apple to claim within the first three months that it has over 100 million subscribers.  This year’s iPhones are largely seen as a place holder until next year’s, when tech-loving texters expect to see performance-boosting 5G compatibility. Apple shipped 30% fewer iPhones in the first quarter of 2019 than the same period a year before, which could be why Apple is so focused on wearables and “hearables” – sales of which are growing fast.

There are two display sizes, with 6.5-inch for the Pro Max and 5.8-inch for the Pro. The A13 Bionic chip will power both with an emphasis on machine learning in the devices as well as low-power consumption. A13 Bionic can process 1 trillion operations per second.  Apple also emphasized battery life with a 4-hour gain for the iPhone 11 Pro compared to the XS. The iPhone Pro Max improves battery life by 5 hours.  The cameras were claimed to have pro-level photos with the triple camera setup and the ability to take three shots from one vantage point.  Apple also used the iPhone 11 Pro and Pro Max to highlight its approach to computational photography. The technology, driven by machine learning, is called Deep Fusion. Deep Fusion is driven by a neural engine that shoots nine images and analyzes long and short images to optimize for detail and low noise.
Key points:

Source: CIRP
​
Ming-Chi Kuo mentioned that even the cheapest iPhone model in 2020 will have 5G compatibility. According to CIRP, iPhone XR has cornered close to 50% of total sales in the 2018 cycle. Hence, by launching 5G on the cheaper iPhone model, Apple’s management is hoping for significant increase in upgrades.

It also should allow the company to continue phasing out the older models, which will help in increasing the average selling price. In the current iPhone cycle, there are four older models which have grabbed more than 30% of total sales. These models help in increasing the unit sales but lead to massive decrease in margins.
Apple already is suffering from a rapid decrease in Product margins. In the latest quarter, Apple reported a 2.4 percentage point decline in gross margin of Products compared to the year-ago quarter. A big chunk of this decline should be due to the iPhone business in which Apple has been offering huge discounts and exchange offers. 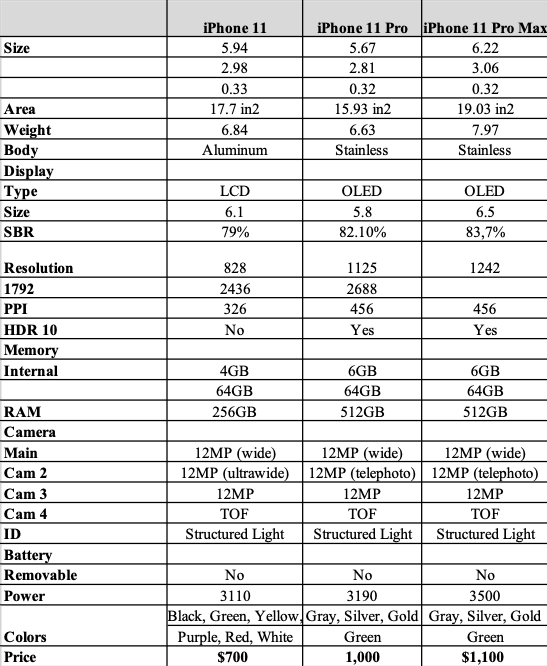