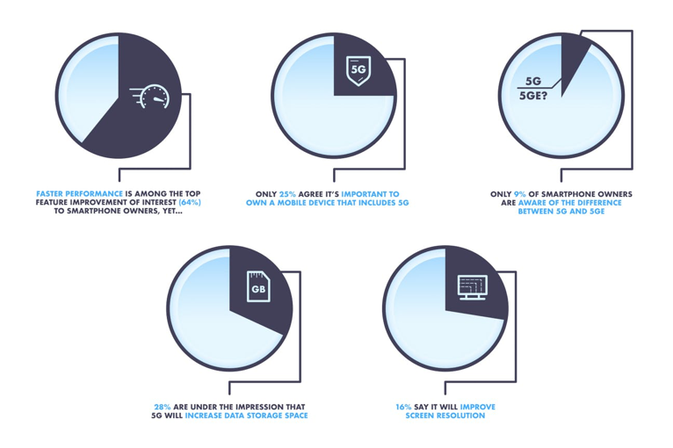 Source: Decluttr
​
​There was also confusion about what 5G actually offers. Just nine percent of those surveyed knew the difference between 5G and 5GE, the latter being AT&T’s brand for a set of advanced LTE technologies that don’t meet the mark for actual 5G. 26 percent claim 5G will increase phone storage space, while 16 percent say it will improve screen resolution.

With these results, it seems 5G has yet to filter firmly into the public consciousness at this relatively early stage of rollout. A report from Ericsson claims there were 7.9 billion mobile subscriptions in the world in the first quarter of 2019. Of that figure, 47 percent were LTE subscriptions. LTE is one technology that falls under the umbrella of 4G. It offers much faster speeds than 3G, reaching download speeds of 19.4 Mbps on T-Mobile U.S.’ network according to OpenSignal tests. In terms of latency, the amount of time it takes for one data packet to get from one point to another, AT&T won with 58.3 milliseconds. Speedtest ranks overall average internet speeds in the United States at 34.76 Mbps. 5G is expected to dramatically improve on these figures. In Deutsche Telekom tests, the company was able to reach three gigabits per second, with the potential to reach 10 gigabits in the future. Third-party tests reveal similar speeds: CNetreached over one gigabit per second testing the Samsung Galaxy S10 5G in Chicago. On the latency side, Godfry tells Inverse that response times are expected to drop to single-digit milliseconds, ideal for lightning-fast response times in gaming and the like.  5G also offers big benefits in terms of capacity and consistent user experience, supporting one million devices per square kilometer, 10 times more than 4G. It’s also expected to be 100 times more energy-efficient than 4G. But while 5G is gradually rolling out across the United States, expected to reach something akin to nationwide next year, Decluttr’s research shows it’s early days for the nascent technology. Consumers are somewhat confused about the benefits and it doesn’t factor too much into their buying decision.
The research also shows, though, that consumers will likely appreciate the benefits on the way with 5G. Perhaps little wonder that Ericsson predicts 1.9 billion devices will use 5G by 2024, making it the fastest generational global rollout in cellular history.