For Q221,  production volume of 44m units (flat Y/Y; down 29% sequentially). Q220 220 forecast are constrained by the impact of inventory adjustments, as production of older products in 2020 was higher than actual demand, and production of new models in 1Q 2021 is likely to be high.

Full-year 2021 forecast: Production forecast for 2021 is 235m units in line with demand. Some industry sources suggest that Apple is targeting production of 260m- 275m units, although the probability is low and the bearish case as 213m units. The four new models scheduled for release in 2H all have the same display size as this year, and although further improvement to camera functions is expected, we do not see any other compelling sales points (some app improvements likely include ToF camera support). At this point, production for 2H21, is forecast at  129m units, or less than the 136m units in 2020.  Even though sales of older LCD models, such as the 11 and SE2, remain brisk now, the OLED ratio in 2021 is expected to grow because all new models this year and next are OLED models while new LCD models will likely be released in 2022 and 2023. Total production of OLED models should rise by 43% to 175m units, overtaking production of LCD models, which should fall by 34% to 81m units. Samsung Display will provide all models), LG Display (5.42” added from 2021 models), and BOE (6.06” only). There is some risk to shipment trends for LG Display and BOE, however, owing to the increased difficulty of manufacturing, including from the adopting of Y-Octa internally integrated into touch panels for 2021 models and the increase of four masks on the TFT side to support LTPO. BOE received final authorization, although it is carrying out trial production at B7 (Chengdu: TFT+OLED/B11: assembly) of iPhone 12 (6.06”) panels that do not employ Y-Octa (the touch panel is externally attached) for this year’s models. It will be challenging for BOE to achieve volume shipments in 2021 amid the increased difficulty of manufacturing. There is a high probability of a large market share increase for LCDs by Sharp, which acquired the buildings and infrastructure of the Hakusan plant from JDI (with Apple acquiring the equipment). That being said, there are still a lot of uncertainties, including the total volume and moves by LG Display and JDI.

There is a high probability of new LCD models (SE3) being launched in 2022 as a result of the acquisition of JDI’s Hakusan plant by Sharp and LCD models should remain popular through to 2025-26. 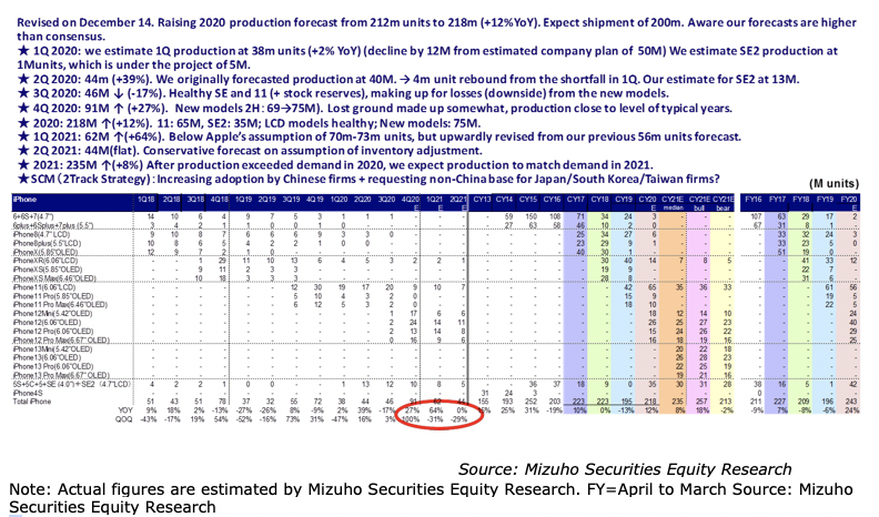 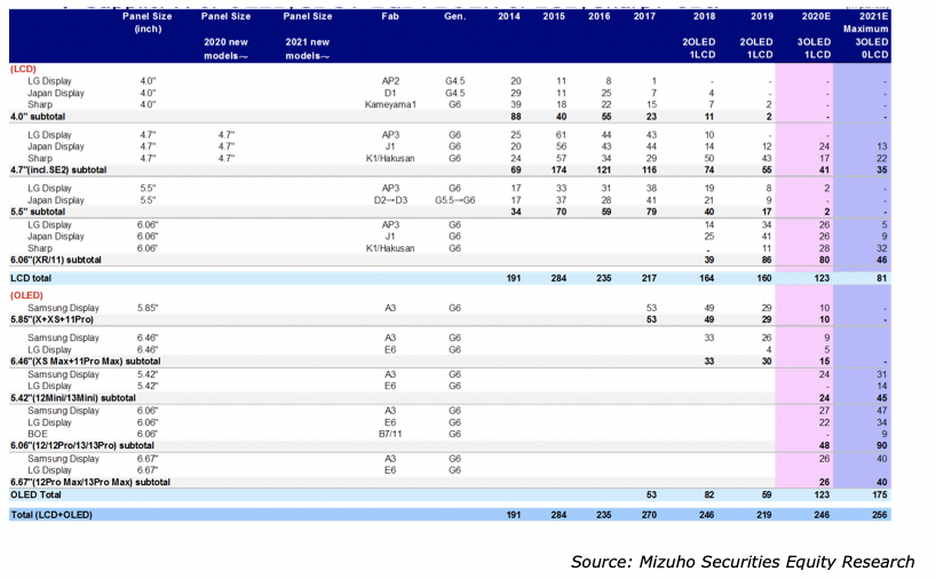 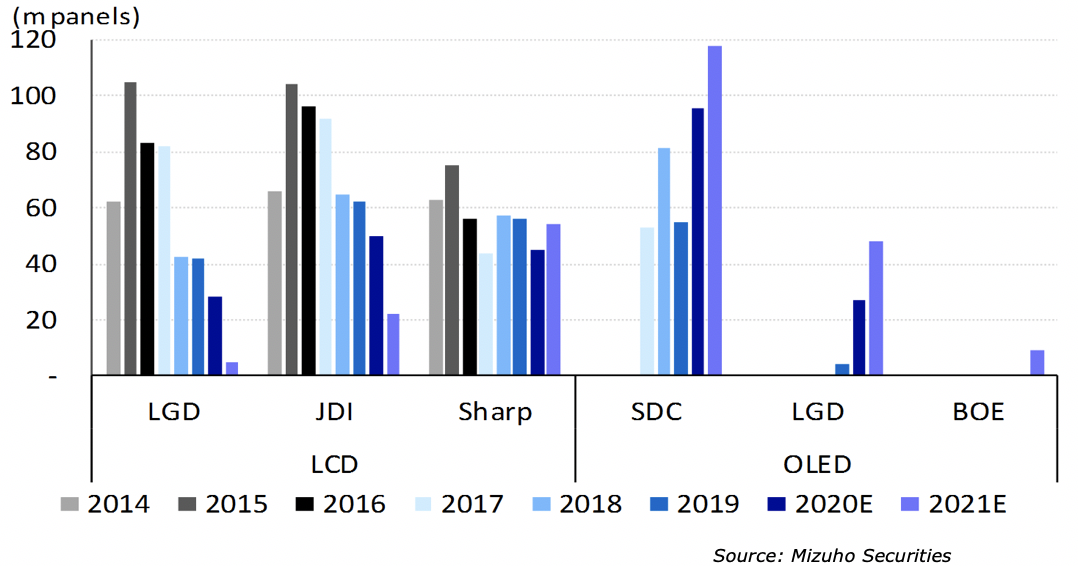 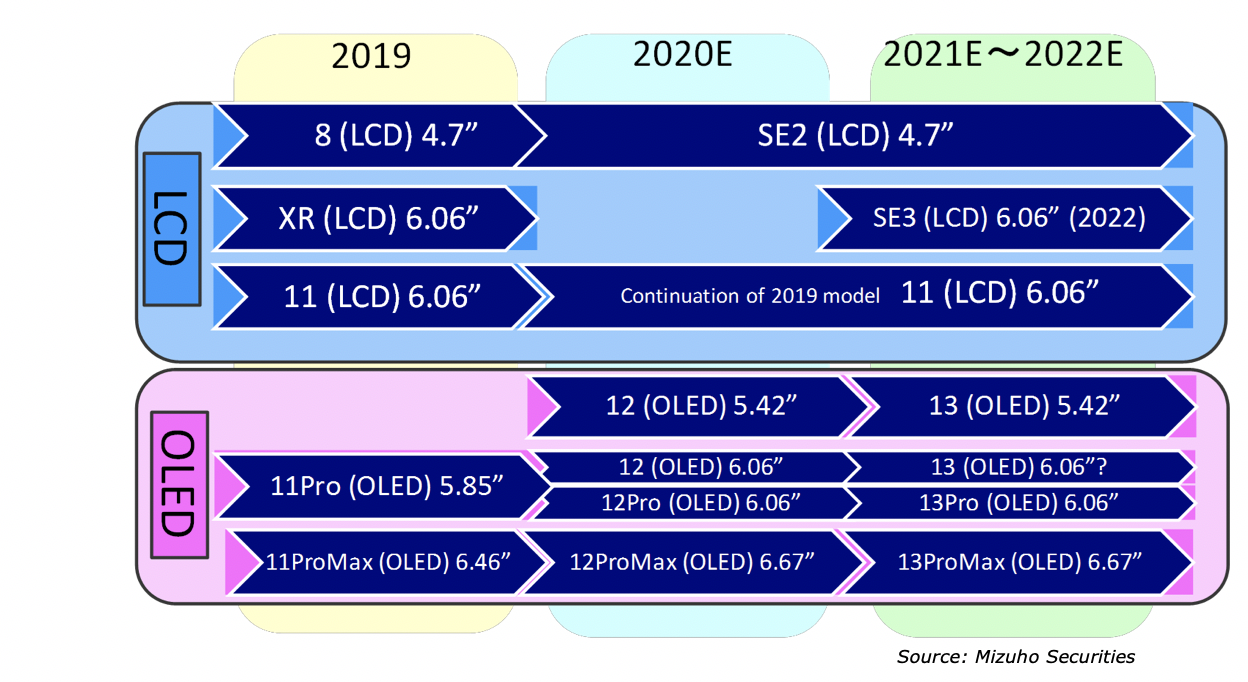 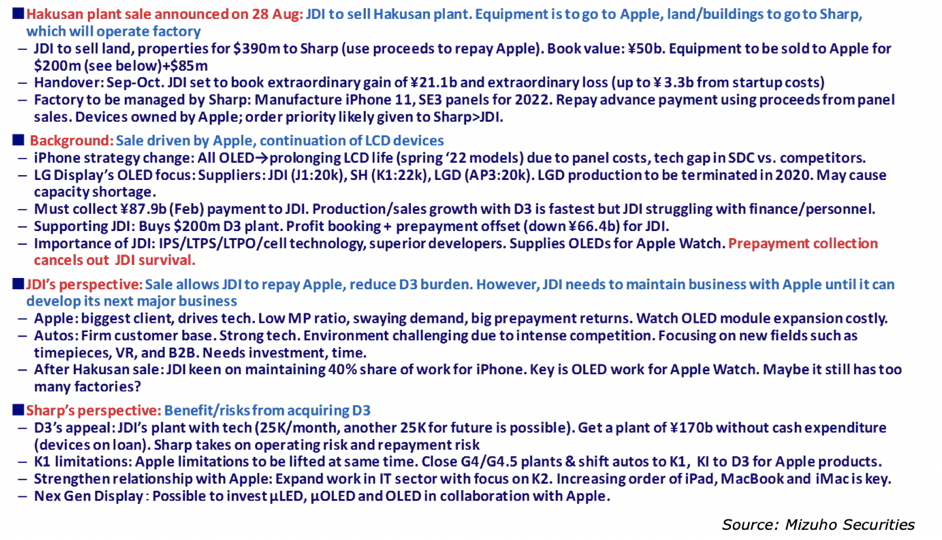