Vertical Divider
Macotakara reports contacts within Apple’s Chinese supply chain have confirmed the so-called iPhone XI will feature a triple camera array which is housed in a large protruding square on the back of the phone. This design was initially leaked in January by Steve Hemmerstoffer (aka OnLeaks) but was ridiculed as being too ugly for Apple to use. Hemmerstoffer also leaked a second iPhone prototype which received a more positive reaction, but Macotakara’s sources state Apple has chosen the only-a-mother-could-love option. Macotakara revealed that Apple tweaked the design slightly so that the three rear cameras are at least symmetrical. But the large square housing seems completely at odds with the company’s much-loved minimalist design aesthetic.  Just as surprising, the design isn’t even original. A square triple camera housing has already been implemented by Huawei in the Mate 20 Pro but with a central position which looks a lot better.
From: Forbes

The “iPhone 11” series — or whatever naming convention Apple has planned for its 2019 iPhone lineup — will be getting a handful of upgrades according to a series of leaks. Additional cameras, improved depth sensors, and game-changing augmented reality capabilities are all likely. But the latest leak indicates that the new handsets’ signature feature will try to pick up where the now deceased AirPower leaves off: a wireless charging capability just like the one that recently debuted in Samsung’s Galaxy S10 series. Apple analyst Ming-Chi Kuo doubled down on his prediction that the 2019 iPhones will come with “bi-directional Qi charging” and he expects the smartphone to receive a sizable battery upgrade to support it. Kuo issued these predictions in an analyst note reported by AppleInsider. The feature will allow users to place their Apple Watch or AirPods wireless charging case on the new iPhone’s back panel to juice up on the go. All 2019 iPhones are expected to come with this capability, but their exact battery upgrades will vary. Kuo expects Apple to ship three new phones — two 6.5- and 5.8-inch OLED models and a 6.1-inch LCD model — identical to this year’s iPhones XS, XS Max, and XR. It’s the batteries in the XS-sized model that are expected to see the biggest power boosts. 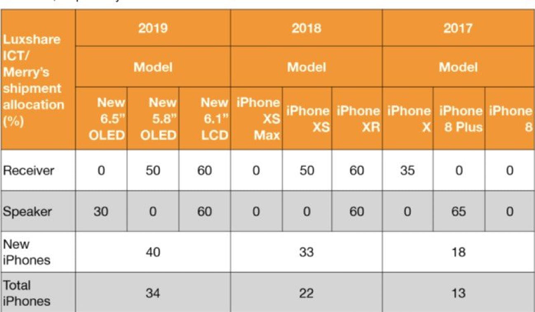 Source: Ming-Chi Kuo
​
Kuo states that he expects a “25 percent” power increase for the XS replacement and a similar increase to the XR (AppleInsider’s report didn’t mention anything about the 6.5-inch model’s potential battery upgrade.)

The XS and XR come with a 2,658 mAh battery and 2,942 mAh battery, respectively. That should take the 2019 version of the XS to about 3,323 mAh and the XR to roughly 3,678 mAh. Users should expect a few hours of increased usage time, though using the phones as a wireless charger would obviously use up some of the charge. From: Inverse

This year’s successor to the 5.8-inch iPhone XS could have a 6.1-inch screen and three cameras on its rear, a new report from Macotakara claims (via 9to5Mac). The increase would bring the size of the phone’s OLED screen in line with this year’s cheaper iPhone XR. The report also claims that the phones will continue to use a Lightning connector, but they will include a USB-C to Lightning cable and 18W fast charger in the box for the first time.  Along with changes in screen size, Macotakara’s new report also claims that the 6.1-inch and 6.5-inch OLED phones will be thicker than last year’s iPhone XS and XS Max, although only by fractions of a millimeter. Ming-Chi Kuo claimed that all of Apple’s 2019 handsets will feature bigger batteries along with support for bidirectional wireless charging.
Although Apple is expected to exclusively use OLED screens on its phones in 2020, this year’s lineup will continue to include an LCD model, according to The Wall Street Journal. This presumed successor to the iPhone XR is also expected to support bidirectional wireless charging along with the two OLED models.

Support for bidirectional charging would make sense given that Apple recently announced a new model of the AirPods, which come with a case that can be charged wirelessly using Qi, the same wireless charging standard as recent iPhones. Samsung’s Galaxy S10 and the Huawei Mate 20 can both wirelessly charge the true wireless earbuds that were announced alongside each phone.

Rumors of the inclusion of a Lightning to USB-C cable along with an 18W charger in the box with this year’s iPhones, if true, are long overdue. Despite having supported fast charging since the iPhone 8, Apple has continued to include an old-fashioned USB Type-A cable and 5W charger with each of its phones. Bloomberg previously reported that Apple is testing USB-C equipped iPhone models for possible release this year, but Macotakara’s report suggests this year’s phones will stick with Lightning. Macotakarahas a good track record with Apple predictions. It was one of the first publications to predict that the iPhone 7 would drop the headphone jack, and more recently, it successfully predicted many of the features of Apple’s 2019 iPads. If Apple follows its previous announcement schedule, we should see its latest iPhones announced in September.
​From: The Verge
​