Vertical Divider
Apple Watch Installed Base Reaches 100m
​
Counterpoint reported that Apple Watch hit a whopping 100 million active wearers with 50% from the US. The user base is reportedly one of the most important measurements of the product's widely felt success. It also shows just how many people are actively using a certain device, as opposed to buying a new one, disliking it, then suddenly dumping it in a drawer. Apple Watch's very own user base has crossed the 100-million mark for the first time in Q221.  This captured the lion's share of the smartwatch user base all around the globe. The watch is still not anywhere close to the success of the Apple iPhone. Apple noted that the installed base for the iOS handset has just passed a billion users in the late 2020. The installed base for the Apple iPad was estimated to be around 400 million in 2020,

Counterpoint reports that much of the massive growth in smartwatches is still in the sub-$100 category, which are less advanced compared to Apple's products but also offer quite similar health-related features including heart monitoring as one of the most popular features. At $279, the Apple Watch SE is the cheapest in the lineup, so the company is still missing out on the massive budget market as it does in most segments.

Production of the upcoming Apple Watch has been delayed in large part due to the complicated designs of the new smartwatch, Nikkei Asia has learned. Manufacturers of Apple Watch 7, as the device is expected to be called, began small-scale production last week but encountered critical challenges in reaching satisfactory production performance, multiple people familiar with the situation said.
Three sources said the current disappointing production quality could be attributed to the complexity of design, which is significantly different from that of previous generations of the watch, and the assemblers’ found issues when putting together electronics modules, components and displays. As a result, the production of the new watch has been temporarily halted as Apple and its suppliers try to sort out the problems and further certify the designs before going into mass production, four people said. "All assemblers are facing similar problems in reaching satisfactory production performance based on the current industrial designs," one of the people with direct knowledge of the matter told Nikkei Asia. Apple has also asked component suppliers to delay some shipments to assemblers, sources said.
The company has overhauled the popular smartwatch and the interior design, including the position of various modules, differs from previous generations of the product, the people said. However, disruption from the COVID-19 pandemic has made it difficult for Apple and its suppliers to travel back and forth to verify the new specifications, making it hard to discover difficulties with the design until test production starts, two of the people said. Apple previously planned to put Apple Watch 7 into mass production around mid-September, another person said, and the engineering team is working to minimize delays. Apple topped the global wearables market by shipment volume in the second quarter, shipping 32.2 million units for a 28.2% market share, according to new IDC data. The market share was down from 34.1% in last year's quarter due in part to the aging lineup, which the Watch Series 7 should help correct. 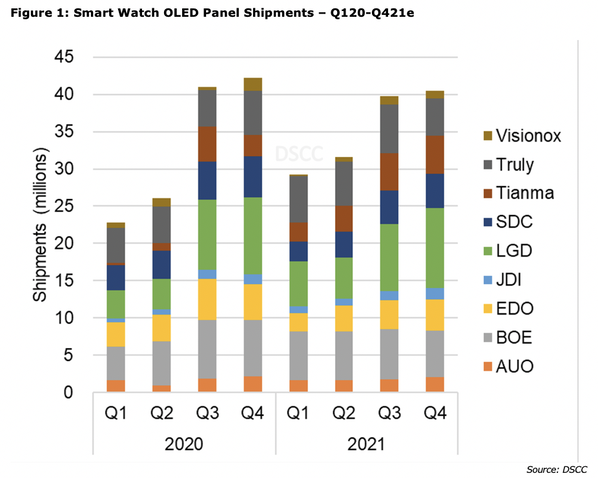 ​Global smartphone shipments in Q221 increased 27%. Y/Y. Apple maintained its No. 1 position in terms of shipments, but its market share declined slightly compared to the same period last year due to intensifying competition with Chinese and Indian brands. Among the global Top 5 smartwatch OEMs, Samsung and Garmin showed a remarkable shipment growth of 43% and 62% Y/Y, respectively, exceeding the average market growth rate and recording higher growth rates than other top brands. Samsung’s Galaxy Watch 3 and Watch Active 2 produced a quick recovery from last year’s sluggish performance. Garmin recorded its highest shipments ever during the quarter. Among the Top 5 brands, only Huawei fell Y/Y. 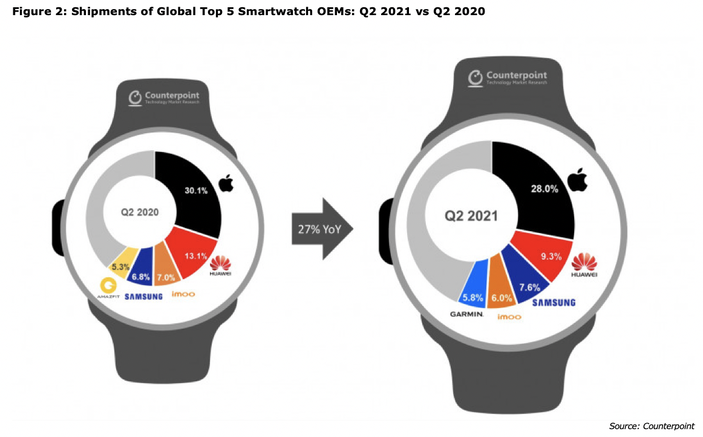 ​China, the second largest market after North America, grew in terms of volume but its growth rate was somewhat lower than that of other regions, and its share by region decreased. As seen in the smartphone market, the recovery of consumer spending after the pandemic has been slower than in other regions. Also, the space vacated by Huawei–HONOR in China has yet to be filled. “India was the smallest market in the second quarter of last year, accounting for less than 2% of the total market, but its share increased to 6% in just one year. The proliferation of sub-$100 affordable, feature-rich smartwatches from Chinese brands such as Xiaomi realme and OPPO, and Indian brands such as boAt and Noise has been one of the key growth drivers.