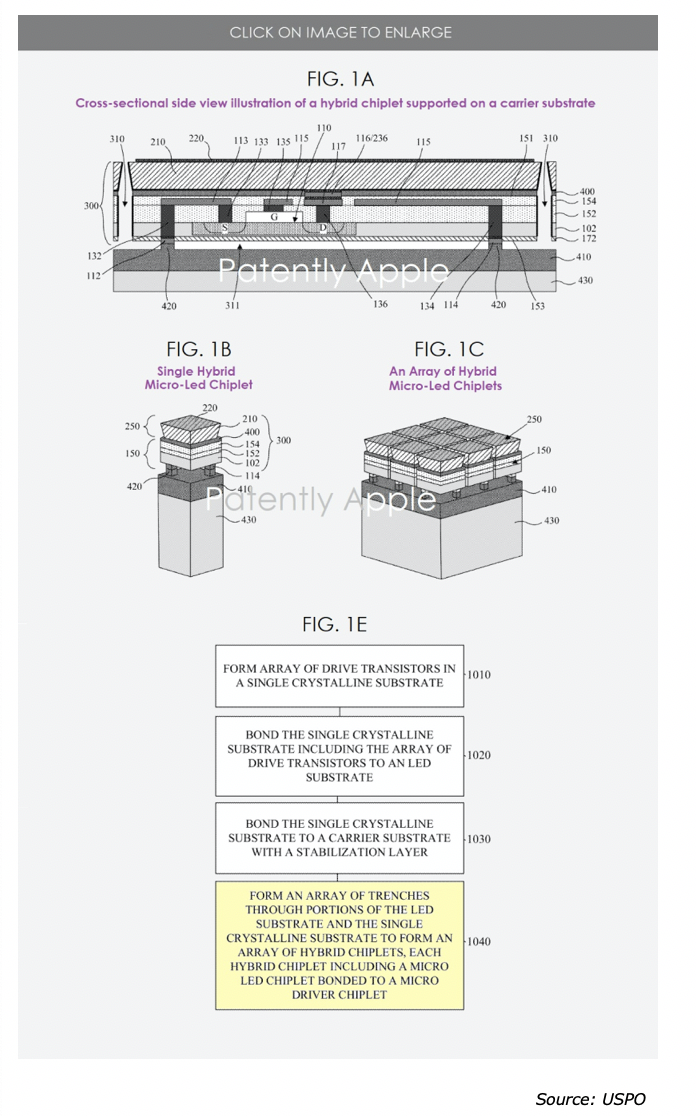 ​Apple's patent FIG. 1E above is a flow chart illustrating method of forming an array of hybrid chiplets.

Apple's granted patent is highly technical and could only be appreciated by those that are engineers or display experts. Average consumers will find this a very difficult read. The first paragraph under "Detailed Description" reads:

"Embodiments describe hybrid chiplets and display systems. In an embodiment, a hybrid chiplet includes a micro driver chiplet including a drive transistor, and a micro-LED chiplet bonded to (and stacked on) the micro driver chiplet. In essence the hybrid chiplets are portions of a display subpixel including a ".mu.LED" and its own drive transistor that is stacked underneath it, taking up no additional display area. In accordance with embodiments, at least one drive transistor is fabricated using semiconductor integrated circuit (IC) type material (e.g., high quality monocrystalline silicon such as an epitaxial device layer) and process to achieve a higher carrier mobility and lifetime compared to that achievable with TFT processing techniques, and hence also satisfy the current requirement for driving the .mu.LED. In accordance with embodiments, the vertical .mu.LEDs and drive transistors are fabricated on separate temporary carrier wafers and then bonded together using metal-metal compression bonding. A vapor HF process may be used to form separate hybrid chiplets, each including a stacked .mu.LED and drive transistor. The hybrid chiplets may then be picked up with a mass transfer tool and bonded onto a pre-fabricated display backplane in which other parts of the subpixel circuitries have already been fabricated, for example, using thin film processing techniques."