The rumored "iPhone Fold" could be using a system of gears to manage how the mobile device flexes, providing increased control and support to a potentially vulnerable component. The headline feature of folding devices is the ability to fold the screen, as the name suggests. One of the problems is managing how the screen actually folds and unfolds. A simple hinge mechanism could easily enable a folding mechanism to function, but it won't allow for the possibility of supporting the display at its most vulnerable position, or in controlling the speed of the process. Such control could provide advantages, like preventing accidental damage from overflexing or from being moved too quickly. In a patent granted to Apple by the US Patent and Trademark Office on Tuesday titled "Folding Electronic Devices with Geared Hinges," Apple attempts to solve the problem with a supportive mechanism.
This is a granting of a patent application that initially surfaced in December 2020, and was originally filed on April 15, 2020.
In the patent, Apple suggests various gear systems that could be used on the hinge mechanism. The gears, which uses toothed members and racks, could potentially rotate and roll along the rack members as the device is folded and unfolded. 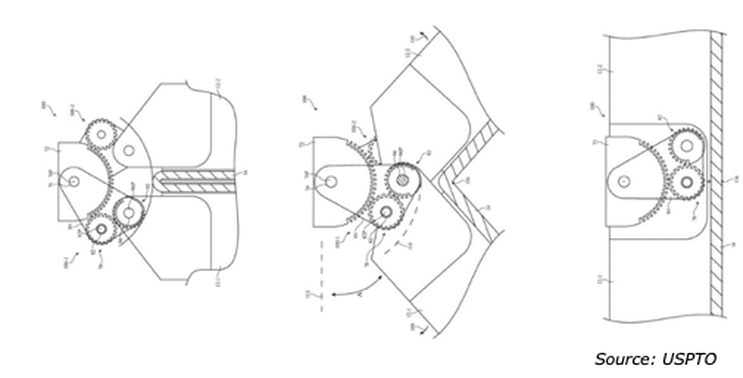 The gears can enable support structures to shift around while the device is unfolded or folded, bracing the display throughout the maneuver. Linkages hold the respective gears in place relative to one another, depending on their required tasks.

Depending on the arrangement, Apple's mechanism could allow for the iPhone to be opened in specific ways relative to the central spine of the device. It would be feasible for the two sections to independently fold out, or for Apple to force both pages to fold out at the same rate. Like other patents, Apple is covering many different basis with the filing, with it covering not only hinges for inward-facing folds, but also devices with outward-facing displays when folded up. 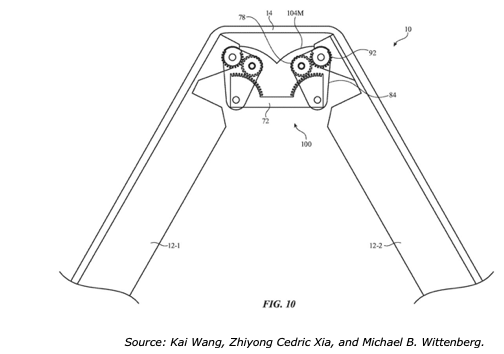 While obviously intended for an iPhone or a tablet like an iPad, Apple also suggests it can be used for many other devices that could benefit from an expanding display. Suggestions include computer monitors, media players, watches and wristband devices, headphones or earphones, head-mounted devices, and even displays in vehicles like an "Apple Car."

Apple files numerous patent applications on a weekly basis, but while the existence of a patent filing indicates areas of interest for Apple's research and development efforts, there's no guarantee it will result in a full product or service.

The idea of a folding display and hinged mechanisms has been floated in the past, including one filing from 2016 suggesting an iPhone could be clipped onto clothing using the system. More complex hinge mechanisms have also surfaced, with a December 2020 multi-link hinge potentially easing the screen into a bend while providing support.

Complex bend combinations have also been considered, such as the 2016 foldable device with a wrap-around display with multiple flexible sections.
Apple has also thought about other issues, such as temperature, that could affect the strength of the display. In one filing granted in March 2021, Apple proposes using heating elements or pixels to warm up the flexible portion of the display on a warm day, while a catch mechanism prevents it from being opened when it is unsafe.