​The Taiwanese press says Apple placed orders for VCSEL testing tools for September delivery, which are positioned to test the laser semiconductor chips the heart of TOF systems. Taiwan based Chroma ATE received Apple’s orders for TOF sensor test equipment and is developing new tools to provide additional quality data (unconfirmed). There have been a number of ‘sightings’ that have indicated that iOS 14, Apple’s next OS iteration due to be released in September will lend the OS to AR and similar applications that Apple will include over time in a variety of products, likely starting with some relatively simple measurement calculations based on the TOF sensor.  Apple’s ‘Gobi’ project, which is currently under development will also likely be enhanced by iOS 14 as it is focused on providing additional AR usable image information that will facilitate additional applications involving TOF data.  Apple is currently testing a version of the application that allows users in an Apple store (and Starbucks) to just hold up their phone and download product data based on products themselves or tags that trigger secondary information downloads.

The additional code in iOS 14 will set the stage for the eventual release of an AR glasses from Apple, which will rely on TOF (and potentially other positioning sensor data) to create a more ‘realistic’ AR image. Apple’s ‘True Depth’ system is designed to work at a distance of between 10” and 20”.  TOF sensors, depending on the type and model, can accurately measure distances up to 12’ (~4mm x 2.5mm x 1mm package), and can provide less accurate data for objects over 100 ft. away, again depending on type and model. Apple will  breathe new enthusiasm for TOF as it begins to incorporate such sensors in an increasing number of devices.  Samsung Electronics has been the leader, with TOF sensors in the Galaxy S20 series and Note 10 series, and most recently in the lower-priced A80, a $360 model, with other brands now beginning to join the TOF world. Other approaches to sense depth, such as Apple’s ‘True’ Depth’, are either bulky, expensive, or require significant processing power relative to TOF, which tends to be small, less expensive, requires less computation and can be equipped with its own processing functions TOF also provide data that will both enhance imaging and allow for a variety of special effects and functions. From SCMR, LLC 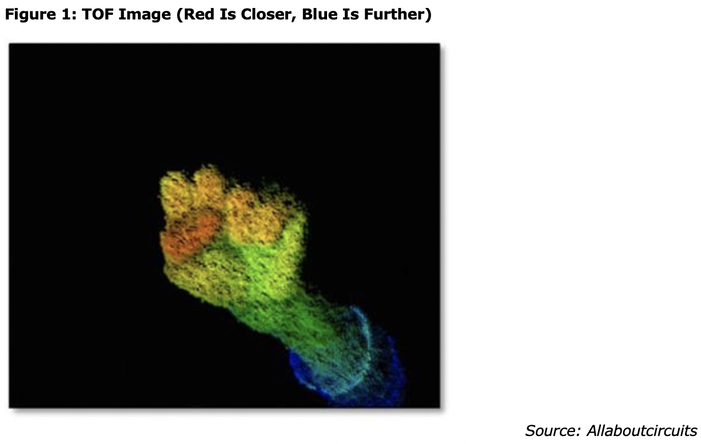