Apple announced a new 12.9” iPad Pro model using mini-LED backlighting, expected to be released in May, with projected sales of ~5m units.  The supply chain is also involved in Apple’s mini/micro-LED development project in Taiwan, which is based on mini-LED chips produced by EnnoStar (a sub of Epistar and Lextar) and involves a number of Taiwanese and South Korean companies.  Once the chips are produced at Epistar, they are sent to both TSMT and Yenrich a subsidiary of EnnoStar, where they are mounted directly on to PCB boards via SMT (surface –mounting technology), rather than more typical thru-hole mounting.

Given the size of the mini-LEDs relative to more standard size LEDs, surface mounting is the logical technology, especially given the number of LEDs, which in this case is over 10,000.  Moving and mounting the small LEDs is a daunting task that carries with it inherently lower yields, and the removal and replacement of those mini-LEDs damaged in the process is a chore that adds to both the cost and the average production time.  TSMT has been plagued with low yields that have been a cause for potential short supply or extended delivery times for the iPad Pro, and reports that much of the SMT work has been shifted to Yenrich until the TSMT yields can be improved.

The flexible PCB used for the mini-LEDs is produced by South Korean supplier Young Poong Electronics and LG Display and Sharp (are supplying the display, with GIS (supplying touch components and Heesung Electronics assembling the modules.  The new supply chain, will have little overall difference on how successful the 12.9” iPad Pro and initial reviews should be positive, as it incorporates both the M1 chip and the new display.

Apple’s latest iPad Pro contains several major upgrades on the inside. It’s got the same powerful, energy-efficient M1 chip as the latest MacBook Air, 13-inch MacBook Pro, Mac mini, and now the redesigned iMac. Cellular models have made the jump to 5G. The front-facing camera can zoom and pan to keep you in focus on video calls. But aside from the processor, the biggest technical leap is exclusive to the 12.9-inch iPad Pro: it’s what Apple calls the “Liquid Retina XDR,” a new display that adopts Mini LED backlighting to achieve higher brightness and greater contrast than any iPad (or Mac) that the company has ever made. Apple says the 12.9-inch iPad Pro can reach 1,000 nits of full-screen brightness — on par with the ultra-expensive Pro Display XDR — and portions of the screen can hit 1,600 nits when playing HDR content. That’s brighter than many 4K HDR TVs on the market. For comparison’s sake, the previous iPad Pro topped out at 600 nits. The 16-in MacBook Pro can go up to 500 nits. The flashy 24-inch iMac hits 500 nits. Things move a little closer when you look at the iPhone 12 Pro’s OLED screen, which can hit a max brightness of 800 nits and 1,200 in HDR. Apple isn’t yet ready to make the switch to OLED for its tablets, and the reasoning could be the brightness advantage of Mini LED — plus the company’s promise that this iPad Pro, with its display, still has the standard 10-hour battery life that iPad users have come to expect.

Figure 1: A Visualization Of TCL’s Mini LED Implementation On Its TVs 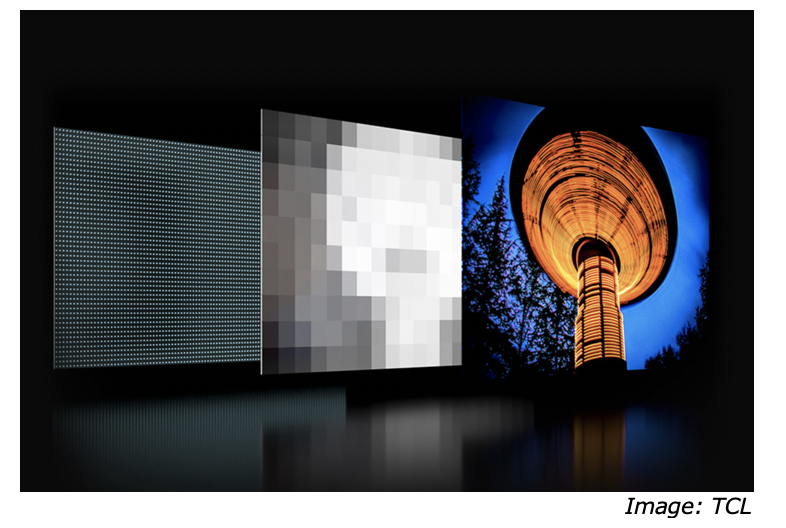