Notebooks are often evaluated on their display processor efficiency. Higher power efficiency can lower the battery size, lowering the size and weight of the notebook. There's no standard metric to assess processor or computer efficiency. The Geekbench multicore score divided by an estimate of power consumed is a good substitute for a widely accepted standard, because the CPU test is cross platform (multi-OS and multi-processor). For power consumed, the processor thermal design power, or TDP is used. Typically, almost any multicore benchmark will drive an x86 processor to its TDP. Turbo Boost will actually take it briefly higher in the first 30 seconds or so of a benchmark, so assuming the TDP is usually a little conservative. AnandTech recently tested power consumption of the latest Intel Tiger Lake notebook processor, a Core i7-1185G7, and found it quickly settled to its rated TDP: 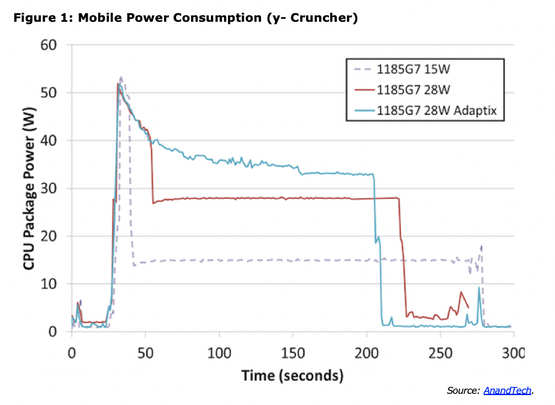 ​Tiger Lake is Intel's latest "11th Gen" 10 nm Super Fin processor for notebooks. It has a configurable TDP of 15 or 28 watts, which is why there are different power settings shown in the graph. The initial spike is the Turbo Boost effect. Apple doesn't publish a TDP for the M1, which has led to a number of different approaches to estimating the power consumed by the M1, and to different numerical estimates being published. AnandTech in testing of an M1 Mac Mini, estimated an average single threaded processor power consumption of 6.3 W, and an average multithreaded power consumption of 22.3 W.[1]


[1] Based on separate measurements, these numbers could be high by as much as roughly a factor of 3. 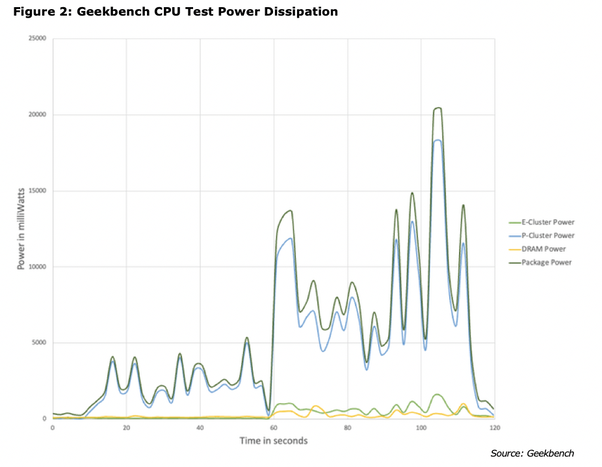 The graph shows shown the power contribution from the GPU since it was insignificant during the test. The first sixty seconds corresponds to the single core portion of Geekbench, while the second 60 seconds is the multicore portion. Apple ​has taken processor power management to a whole new level. Most estimates of M1 power consumption correspond to the peak power seen in the graph: about 5 W for single core, and about 20 W for multicore. But most of the time, the processor isn't using nearly the peak power levels, and it's not really correct to characterize the power consumption by the peak power. The average power is what should be used. During the single core test, the average package power was about 2 W. During the multicore test, the average package power was about 8.35 W. The reason why average power is the right metric is that the total energy consumed will be given by the average power multiplied by the time interval when the processor is active.
​
Apple also applies similarly aggressive power management to the GPU as shown in the results for the Geekbench OpenCL graphics test, which probably explains Apple's reported lack of interest in using non-Apple discrete GPUs in future systems. 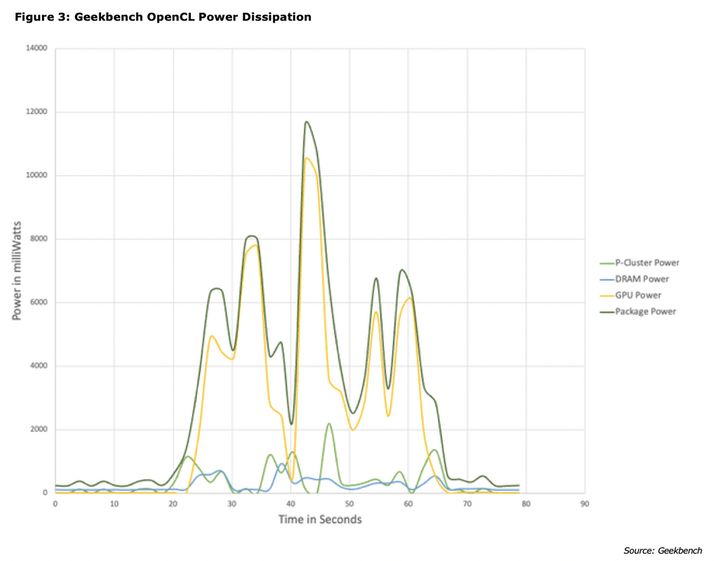 ​The table below summarizes data for systems using x86 processors compared to the M1 MacBook Air:

​The column on the far right gives the numerical values for an efficiency metric of Geekbench multicore score divided by processor TDP. For the M1, a measured value of power is used. The TDP for the iPad Pro is an estimate. 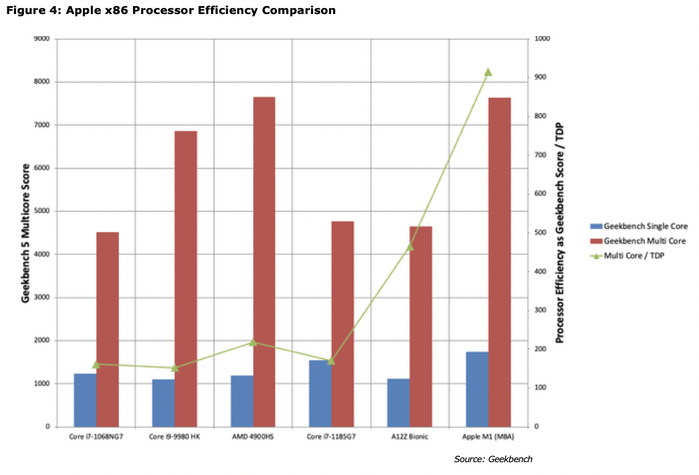 ​It is noteworthy that there's been little improvement in efficiency of x86 architecture processors in moving from 14 to 10 to 7 nm process nodes. That seems to argue against the notion that process greatly impacts efficiency, or that the M1 has an efficiency advantage due to TSMC's 5 nm process. The efficiency advantage of Apple's M1 over x86 is not just a matter of a few percentage points but is at least a factor of 4. Apple's efficiency advantage is likely caused by Apple Silicon as being its own unique architecture that just happens to use the ARM instruction set. Apple's power management approach has its roots in the technology it acquired from PA Semi in 2008. PA Semi was applying its technology to Power PCs at the time, so the approach was really architecture agnostic. Power consumption is the ultimate limiter of processor performance, and Apple can easily scale up its Silicon to desktop class by simply adding more cores and slightly enlarging the physical area of the SOC. Source: Mark Hibben, Seeking Alpha Contributor