The global smartphone market posted record first-quarter revenues driven by strong revenue growth of top five OEMs according to research from Counterpoint’s Market Monitor service. The annual growth was on a lower base of the same quarter of 2020 when COVID-19 impacted China and parts of the US and Europe. Shipments in countries like Europe, China and India were stronger than expected. The supply chain players prioritized the top five brands enabling them to launch flagships earlier than their usual cycle, which boosted their market performance despite the supply shortage issues during the quarter. 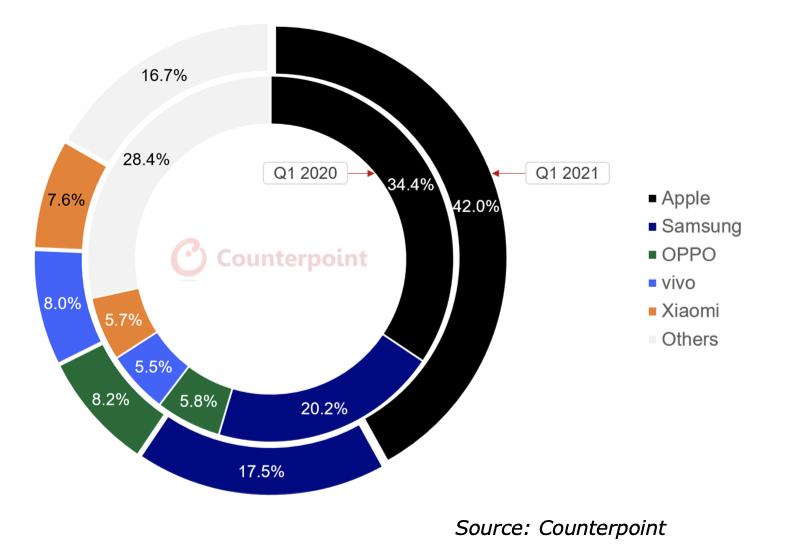 Highlighting the revenue dynamics, Senior Analyst, Harmeet Singh Walia noted, “Global smartphone segment clocked a record first-quarter wholesale shipment revenues of $113 billion*, up 35% YoY. This is coming at a time when the industry was facing supply chain constraints. Apple captured a record first-quarter revenue share driven by the strong performance of the iPhone 12 Series and demand spill-over from the previous quarter due to delayed launch. The popularity of its higher-end variant, the Pro Max, in countries like the US and Europe also boosted Apple’s revenue growth. Xiaomi, OPPO and vivo also clocked record shipments and revenues this quarter, helped by capturing Huawei’s share globally and significant 5G uptake in China. Flagship series such as Mi 11, Find and X60 drove this uptick, respectively.” 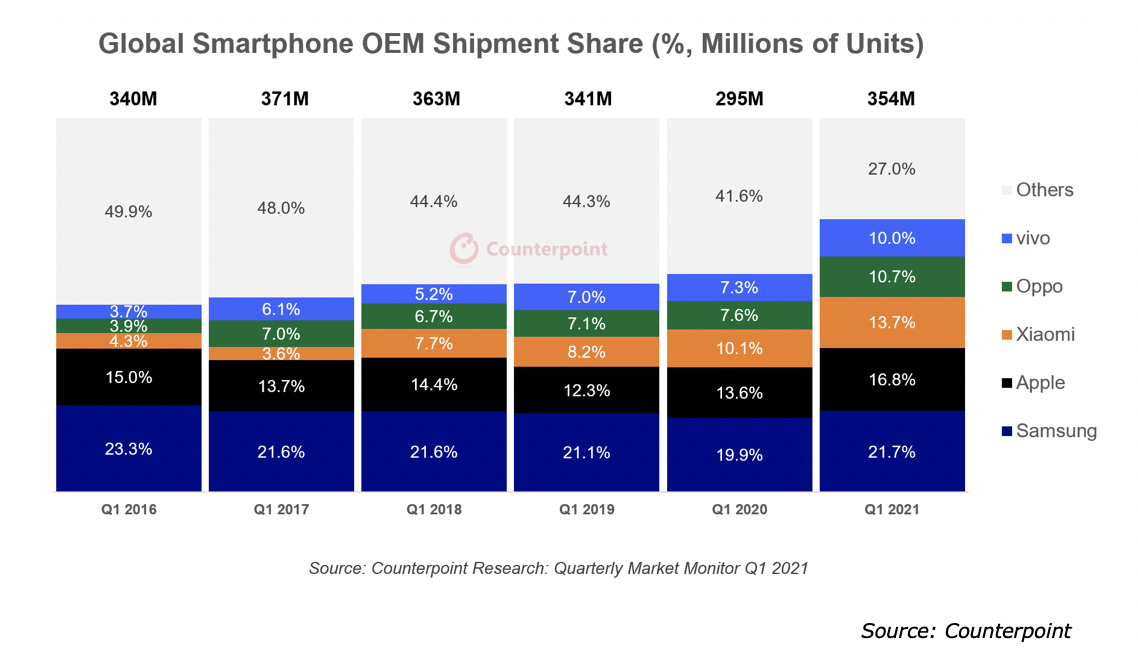 Tarun Pathak, Research Director at Counterpoint Research, “Semiconductor shortages have affected the overall supply landscape and increased the lead times of chipset solutions for major vendors. However, we see these vendors looking to diversify their foundry strategy to alleviate chipset shortages in the second half of this year. These shortages might push specific component prices up by 5-10% and OEMs will look to absorb these cost increases by being creative with the Bill of Materials (BoM) and in some cases might even pass the added costs to the consumers.” Mr. Pathak added, “In the longer term, to avoid the repetition of such semiconductor supply bottlenecks, which have become a geopolitical issue, we expect a tech cold war between the US, Korea, Taiwan and China. The aim is to reduce dependence on a few foundries by investing hundreds of billions of dollars to build domestic capabilities. For example, the Biden administration has pledged to invest $50 billion over the next few years, and players such as Intel and Global Foundries will be the key beneficiaries.

·       Samsung’s growth, both in terms of revenue and shipments, is primarily due to the success of its latest S21 series. An important catalyst in the success of this series will be the expansion of 5G networks in the US and Europe. Samsung’s push into the mid-end segment with its successful A-Series devices was another major driver. Samsung also dominates and leads the niche foldable smartphone segment in terms of design, marketing, and shipments, but is expected to see greater competition from Huawei’s Mate X2, Xiaomi’s Mi Mix Fold, and 2021 launch expectations from vivo, OPPO, and TCL.

·       OPPO  had a record quarter both in terms of revenue and shipments. OPPO shipped 38 million units globally, growing at a staggering 70% Y/Y. OPPO’s China performance has been especially impressive thanks to the successful rebranding of the Reno series and the strong momentum of the A series in the mid-segment and the Find series in the premium segment. OPPO is also aggressively expanding its presence in Europe, where it has doubled its share year on year.

·       vivo‘s shipments grew by 64% YoY to reach its highest ever, 35.5 million units, in Q1 2021 driven by growth in China, where it has reached leadership position during the quarter. vivo and OPPO are fighting neck-to-neck for the leadership position in China which has been relinquished by Huawei. Vivo’s also benefited from a clear product positioning, consumer-friendly product line-up and the strong performance of its newly launched budget models with 5G capability and the equally strong performance of its premium X60 series.