Smart Watches joined Notebooks as a growth application as shipments were  up 57.1% Y/Y in 1H20, according to Counterpoint. Apple remained the leader, by far, with a majority of shipments at 51.4%.  Their Y/Y gain was 86.8%. All the other 7 OEMs were up as well, and Huawei excelled with 136.9% growth from a low of 3.5m shipments last year. The Apple Watch 5,4 and 3 were the #1,2,and 4 best-selling watches, respectively. 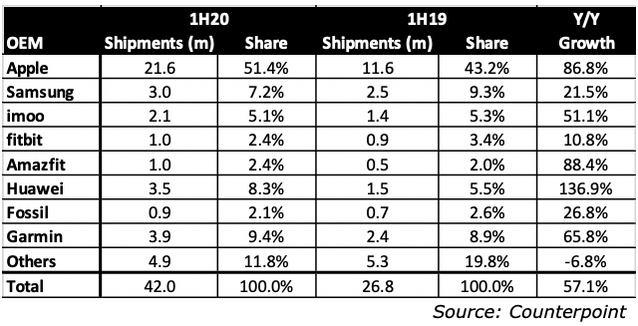 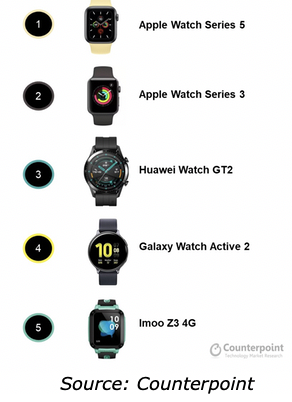 A comprehensive report on the smartwatch shipment tracker by model and geography is available for subscribing clients on Counterpoint’s  research portal.

Two watches that didn’t make the list are the SpaceXplorer and the Nubia Watch, which are definitely not Apple Watch look a likes. The SpaceXplorer features styling elements from the new SpaceX ultra-modern space suits. Then it takes it up a notch by using the Dragon V2 capsule’s design details – the grey dial ring, white indices, and the unique hands which are modeled off of the capsules white oblong shaped indices and windows. “The minute-hand mimics the path of a gravitational slingshot, and the second-hand is actually a white disc on which a dot rotates to mimic the moon’s movement around the earth. The hour hand continues to nod to the design of the new and improved spacesuit, highlighting the shape and lines of the collar,” says UNDONE. And because space is an infinite black expanse, the watch dial glows in a cool nitrous blue when its dark.

Just like the spacesuits, the watch will be hermetically sealed to withstand up to five atmospheres. The case back’s circular pattern symbolizes the landing pad of the SpaceX autonomous drone ship and what truly stole my heart about this watch was the engraved “Of Course I Still Love You” quote that was Elon Musk’s tribute to the AI that commanded spaceships in a science fiction novel by Iain M. Banks. “We’ve added the launch time, date, and coordinates (Kennedy Space Center, Cape Canaveral) and to make this really special, we also added return date,” says the team. Only 300 pieces of this SpaceXplorer watch will be made and they all pay homage to the two astronauts’ historic journey to the International Space Station and the first-ever successful launch of a crewed orbital spacecraft by a private company. It’s a Musk-have!

We previously reported on the new Nubia Watch, which has a The screen has a 4 inches diagonal OLED display and a resolution of 960x19. It may be under-resolution as the pixels are viewable up-close, but it’s sharp enough at regular watch viewing distances. The display is covered in flexible glass from Schott. The rest of the Nubia Watch’s spec sheet is less ambitious. There’s a Snapdragon Wear 2100 processor, which isn’t a great sign, and a 425mAh battery. (Nubia says it should last around 36 hours on a charge. It also carries the usual array of sensors for heart rate, motion, and location, and the Watch has typical basic fitness tracking capabilities. In China, it can work as a standalone phone with LTE eSIM support. 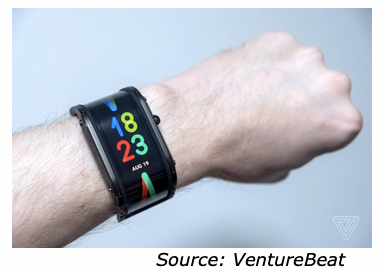