An LPKF press release published last May stated in part: "The production of foldable glass displays has been a great challenge so far. The processing of the so-called backplane with Laser Induced Deep Etching (LIDE) technology now enables manufacturers to come a big step closer to realizing long-lasting foldable displays.
Apple had been working on foldable iPhones since at least 2017. Their first patent was granted in 2018, prior to LPKF's press release. Below are a few patent figures from Apple's granted patent. 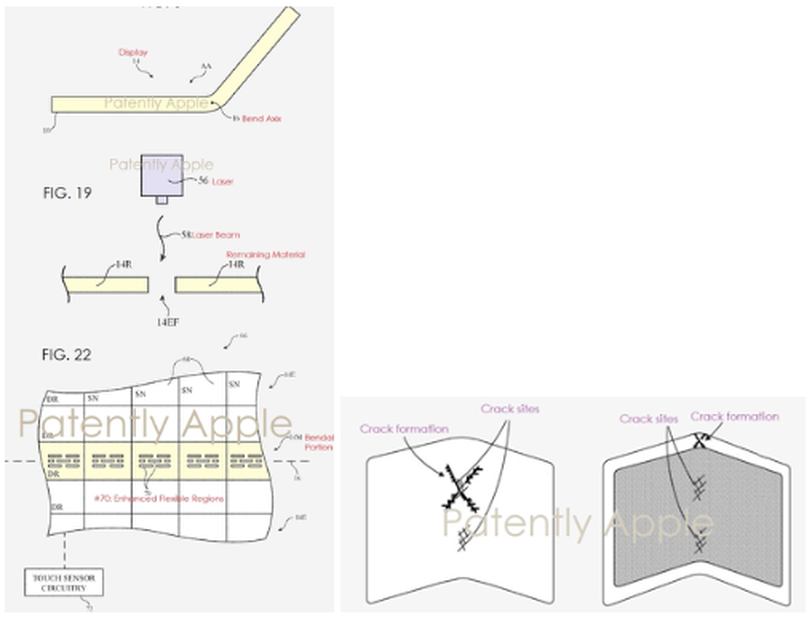 Source: USPTO
A new report posted by Etnews today states that the foldable glass market is now heating up as glass industry leaders are rushing to fill the need of folding glass that is durable and resistant to cracking over time. The report notes that Germany's LPKF developed next-gen foldable glass manufacturing technology using laser is pushing it as its new business. LPKF has secured a technology that can materialize characteristics of folding by applying a special pattern through the microfabrication process on a part where the glass is folded to create a fine pattern. The fine pattern is then filled with polymers that have their reflectivity matched so that the patterns are not seen. The report briefly highlights other specialty glass manufacturers and developers rushing to develop better folding substrates for foldable phone and tablets such as Chemtronics that is creating next-gen 'Ultra-Thin Glass' (UTG).

Apple is working on displays with hinges, and other components that need to be flexible, including batteries. "Flexible battery structure," US Patent No 10,637,017, is concerned with how to power a foldable display, but it's also looking to fix a recurring problem with all devices. "Batteries often take up a substantial amount of space in a portable electronic device," it explains. "As devices have grown increasingly more power hungry, greater amounts of space need to be dedicated to accommodate space for the batteries." "In addition to taking up space, the batteries are also often quite rigid, often making placement of the batteries in portions of a device designed to bend impractical," it continues. "When the battery is rigid and unable to withstand substantial amounts of bending, the substantial portion of the device that surrounds the battery is also unable to bend." Several proposals center on working with both battery cells and the connections between them. "One solution... is to separate the flexible battery cells into discrete regions, … where the flexible battery cells can be rolled up into discrete cylinders and then distributed across a flexible substrate. Depending on the interval between the discrete cylinders and diameter of the discrete cylinders, the resulting battery can be flex about at least one axis."

Much of the patent details different methods of mounting or stacking battery cells, plus specifics about alleviating the stresses this causes on the battery material. This could mean getting away from the familiar rectangular battery, and Apple has already exploited the idea of stackable batteries in 2015's MacBook. Chiefly, though, this patent is concerned with the "operation of a flexible battery integrated within [a] flexible display. [The] flexible battery can be distributed along all four sides of [a] flexible display," it says. "For example, [the battery management unit] BMU and main logic board could both be packaged within a housing into which... is configured to retract by a retraction mechanism that results in flexible display being wound around a cylindrical member,"  which is the patent's most direct reference to a rolled-up display. Apple's patent describes multiple ways of creating flexible batteries, and it is all concerned with how many different types of display device can be created.

Detail from the patent illustrating one example of battery cells on a flexible mounting
Samsung used the UTG methodology Schott developed via Dowoo Insys to create the glass for their Galaxy Z Flip smartphone. However, shortly after launching, signs of the glass showing weakness was exposed.  Etnews further noted that "UTI and PHENIX Inc are also working on their own foldable glass manufacturing technologies. There is also an increase in the number of relevant equipment makers such as Philoptics, JWM-Tech, and QRSystem that help raise the accuracy and the yield of manufactured glass.

Samsung have been in talks with all folding glass related companies seeking potential collaboration. Manufacturers may be leery of Samsung knowing that they have their own Samsung Display division that would likely copy the technology over time. Samsung Display is already looking to build foldable glass production lines in Vietnam. The only hard evidence that Apple is working on foldable devices is from a long series of patent filings. Apple doesn't own a display plant and therefore will rely on current and/or new display partners to work with when or if they decide to launch a foldable mobile device in the future. Apple supplier BOE, for example, is one such potential display maker who is currently supplying Huawei and others with foldable glass products.   Samsung, Huawei, Royole, Lenovo (Motorola) and shortly TCL and Xiaomi will be bringing next-gen foldable smartphones and/or mini foldable notebooks to market later this year. Apple won't be on the cutting edge in this category until they have the right folding glass and product designs that will make sense for their enthusiastic fan base. Apple's current focus for a major future product appears to be on all-things related to smartglasses and/or Mixed Reality Headsets while they keep an eye on the emerging foldables market by continuing to develop and file for patents for a potential future product when the time is right.