Apple plans to produce up to 96 million iPhones for the first half of 2021, a 30% Y/Y increase, according to Nikkei Asia learned. Suppliers were to build some 95 million to 96 million iPhones, including the latest iPhone 12 range and the older iPhone 11 and iPhone SE, though industrywide shortages of key components could threaten that target. The tentative full-year forecast that Apple shared with its suppliers suggests it plans to build up to 230 million iPhones in 2021, including both old and new models. This would mark a 20% Y/Y increase, though the target will be regularly reviewed and revised in response to any changes in consumer demand, they added. "The planned production for the next quarter and the following quarter have been decided and the outlook is quite bright," an executive at a key Apple supplier told Nikkei. "The iPhone 12 Pro, and iPhone 12 Pro Max are especially stronger than we estimated, while the demand for iPhone 12 is in line with the forecast, but iPhone 12 mini is a bit sluggish," the person added. Apple experienced two consecutive years of smartphone shipment declines in 2018 and 2019. In the first nine months of this year, its shipments stood at around 116 million iPhones, down just 1% on the year, according to IDC.  The tentative production plan for 2021 is nearly on par with the record 231.5 million iPhones shipped in 2015.

Apple reallocated components for iPads to iPhone 12 series, a move that affected 2 million to 3 million iPads produced this year, Nikkei Asia reported.
Xiaomi had given suppliers a bold production target of 240 million smartphones for next year, which is likely to exacerbate the industrywide shortages.

Apple tried to stockpile as many processor chips as possible to avoid supply chain disruptions. CLSA and Jefferies, suggested Apple had cut some orders for its A14 processor chips for the January-March period, though it likely reflects a "seasonal adjustment" and that overall demand for the first half of 2021 is still healthy. "Apple's adjustment indicates they now have enough processors to meet their production plan but are still chasing other needed components." Jeff Pu, an analyst with GF Securities, said most suppliers and market watchers foresee rosy demand for 2021, and iPhone shipments will "certainly" return to growth next year. Apple's iPhone shipment will definitely see a recovery for next year, but overall, it may not benefit from Huawei's loss of market share as much as other players like Samsung, Xiaomi vivo and OPPO," Pu said. " The iPhone fared pretty well in November, with 100-113% growth year on year! A tremendous number. according to CIACI

Source: CIACI
Apple sold 3.5 million additional iPhones in November 2020 exhausting the previous 4.0 million iPhone deficit from September (0.4 million extra in October, 3.5 million extra in November).  Growth may decelerate in December, as a good part the November increase was a catch-up in sales due to the delayed iPhone 12 launch. Growth should remain both positive and reasonably strong. Looking at July 2020, the last time iPhone sales weren’t affected by a launch, the iPhone experienced a 29-30% drops in sales. So, the catch-up is covering prior declines in sales as well as the catch-up.​
Figure 1: China’s Mobile Phone Shipments Jan’19 to Nov’20 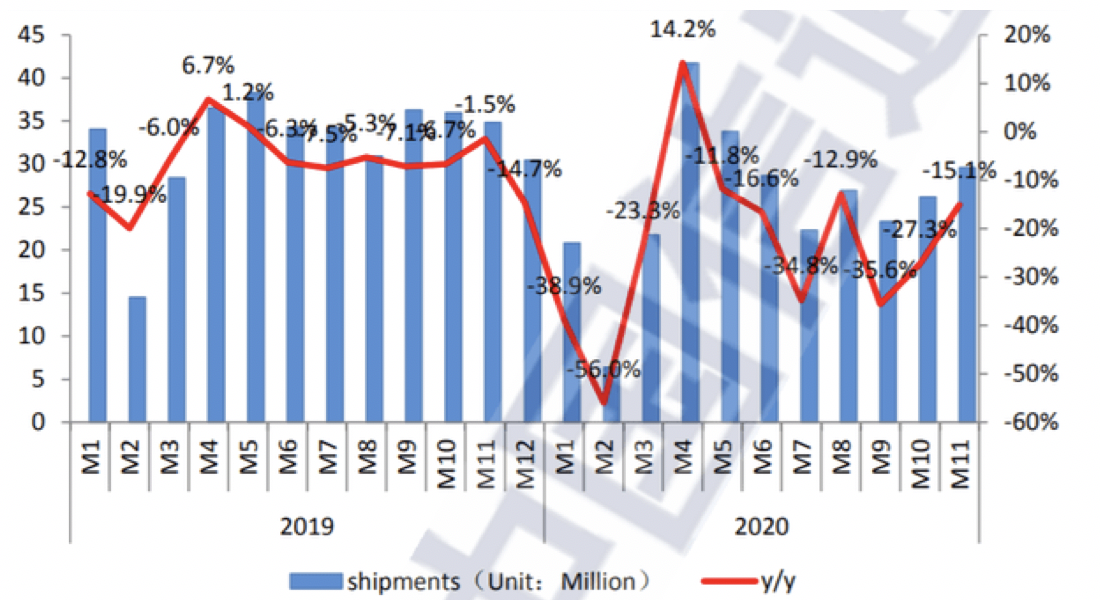 In November, 68.1% of smartphones sold in China were 5G models. The higher cost of 5G models, due to the expensive Qualcomm 5G modems is leading to depressed overall sales. Apple is more competitive this year because it didn’t raise sales prices as much as its competitors. Its competitors had to raise prices because, with low margins, costs have to be passed to the consumer. Apple achieved this by removing accessories as well as launching a cheaper iPhone 12 mini.
The political blockade on Huawei is also leading to less competition in 5G modems, as Huawei was a supplier of the Balong 5000, or SoCs integrating equivalent modems. Hence, the blockade is favoring Apple’s competitive position not just by punishing the main rival, but also by reducing the cost difference between the iPhone and the Android 5G competitors - due to removing lower-cost alternatives for other competitors. An estimate of the cost to produce an iPhone 12 puts the overall bill of goods at $373. The Qualcomm X55 5G modem alone is costing 21% of that ($90) and is the most expensive component by far. Apple’s announced it will be replacing the Qualcomm components with internal developed ICs. Competition in the modem and SoC space could increase due to Samsung  and MediaTek efforts.

Phone shipments in China saw a modest pickup in November, following the trend during the two previous months, although shipments were down 14.9% Y/Y.  Of the 30 new models released in China in November 27 were from local brands (90%), while on a total shipment basis, local Chinese brands represented 76.7% of the total shipments.  5G shipments on the Mainland were 20.1m units, up 19.6% m/m and up 296% y/y and continue to closely track overall smartphone shipments on a monthly basis, representing 60.1% of overall monthly shipments, which has remained the same since June. 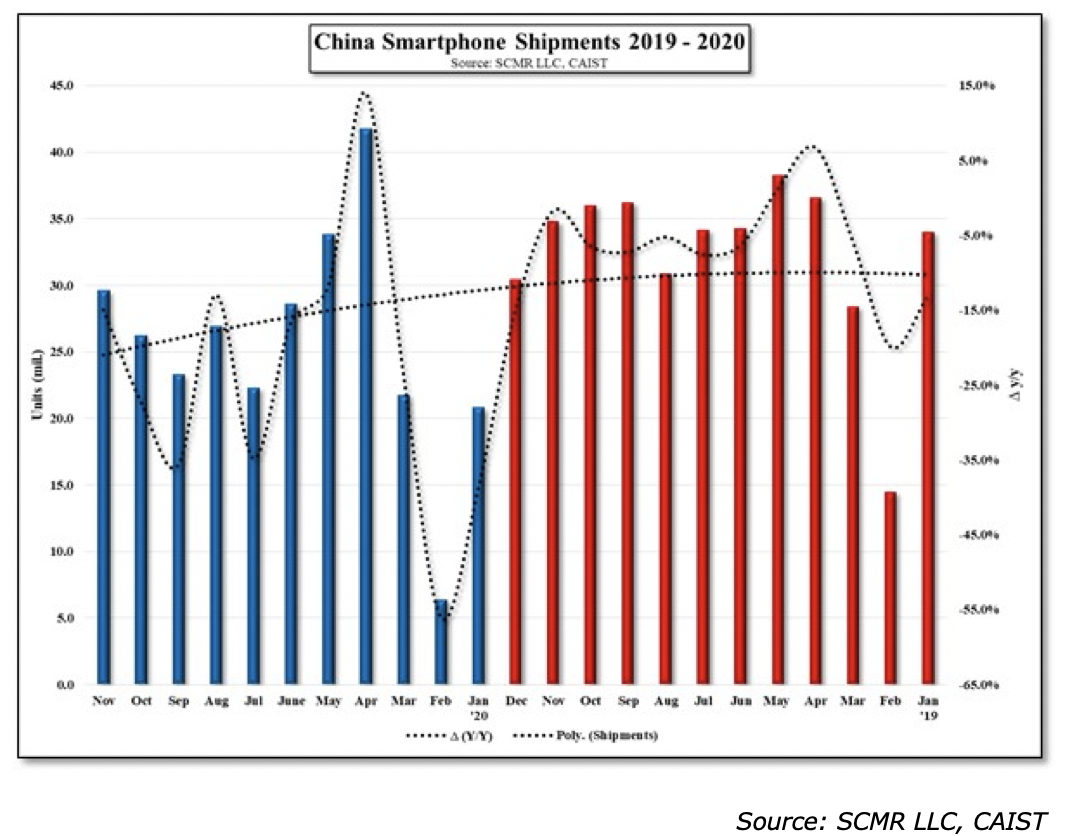