We have been a proponent of scientists pushing the Microsoft and Google approach to AR displays, which used a retinal projector system to eliminate any chance of accommodation-convergence mismatch to accurately focus each individual pixel as they’re projected unto the eyes of the user. Other AR products such as Magic Leap, Vuzix, North etc., which use micro displays on glass cannot resolve the accommodation-convergence mismatch. Now, after much research, Apple appears to be joining the club. This week the United States Patent and Trademark Office published a patent filed by Apple Inc. for a new type of hybrid VR/AR device that does away with conventional screens in favor of a Dynamic Focus 3D Display that projects images directly unto the users retinas. 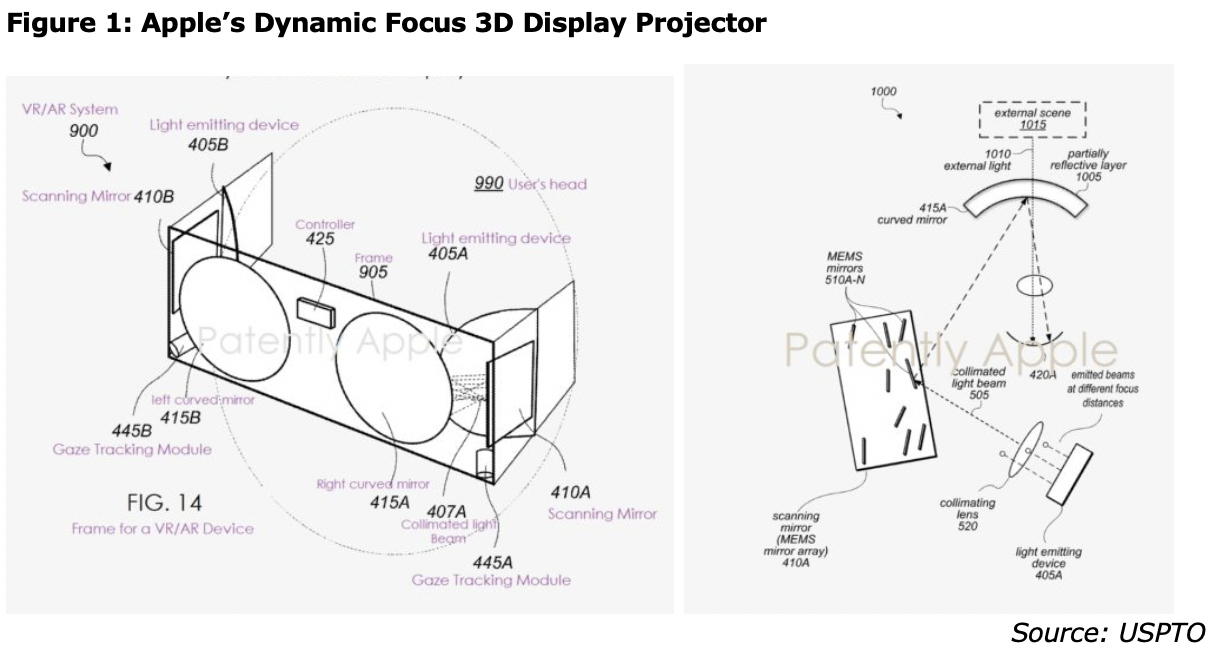 Apple believes that current VR and AR hardware could be responsible for all types of unnecessary eyestrain as a result of “accommodation-convergence mismatch,” a problem that arises when a VR or AR system creates virtual content that does not match the focal depth expected by the users brain, often resulting in nausea, headaches, and other discomforts. Simply put, eyes are attempting to adjust to the depth of objects in both the foreground as well as the background simultaneously.
While it’s true Apple has a long-standing track record of filing patents for outrageous tech that almost never hit the production floor, there may be some hope for this Snow Crash-esque device. According to Patently Apple, the architect behind the design is Alexander Shpunt, founder and CEO of PrimeSense, a subsidiary of Apple Inc. responsible for the design of Apple’s powerful TrueDepth camera. The use of a retinal projector could enhance the use direct patterned OLED micro displays as they  will need "ultra-high pixel density" display brightness, a clearer and more realistic vision with its "immersive sense" display screen according to Steve Chen of INT Tech Co. in Taiwan, the first to achieve a commercial direct pattern OLED micro display.
From: VRScout
​