​Apple depicted how the biometric system would look on a laptop and all-in-one desktop design,  showing a notch not unlike the design found on the company’s smartphone lineup. However, Apple said that the light recognition module for determining a user could be housed in a “notch, a circle, an ellipse, a polygonal shape, a series of polygonal shapes, a curvilinear shape, or the like.”

Like the iPhone’s Face ID module, the biometric system will use a light pattern system consisting of IR lights and sensors, a dot projector, and camera. Additionally, for ergonomic and to accurately authenticate a user, the notch portion can pivot, so you don’t have to adjust the computer’s screen to get an accurate facial recognition. A Face ID sensor in the MacBook’s notched display could potentially replace Touch ID. Despite the fact that the filing was made in September last year — more than a year after the 2018 iPad Pro model with Face ID launched —Apple is stubbornly sticking with the notch to house the biometric scanning module. On the 2018 iPad Pro models, Apple had built the Face ID cameras and sensors into the black bezel portion of the display to the allow the tablet to be used seamlessly in portrait or landscape orientation. Building the Face ID module into the screen’s module allowed Apple to eliminate the notched design on its tablet. And even though iMac and MacBook owners won’t need to switch their displays into portrait orientation, a notch or cutout would be wasted space on the display. A major downside would be that creative users who rely on Macs for their workflow may find the notch distracting, as it would cut into the content on the screen. 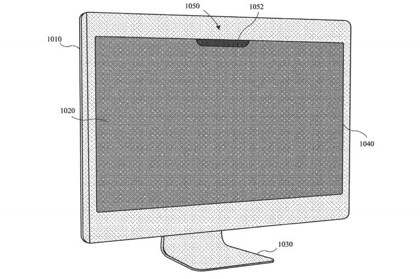 Source: USPTO
If the Mac follows in the iPhone’s steps, then the Face ID module could potentially supplant and replace the Touch ID modules on the keyboard deck of Apple’s laptops for authenticating a user.
“Although the systems and techniques described herein are described with relation to recognizing users and/or authenticating users, the systems and techniques may also be applicable to capturing face gestures and emotions, video chatting, generating emoji, encrypting data, unlocking the computing device, supplementing passwords, differentiating different users, and the like,” Apple revealed in its patent application.
Despite the publication of the patent, it’s still unclear at this time if or when Apple intends to bring Face ID to the desktop. This could allow Mac users to not only log into the computer, website, and apps without having to type a password, but it could also bring features like Memoji and Animoji to the desktop if it gets implemented in the future.