Vertical Divider
Five brands in India account for a 77% share of the total smartphone market. The market has been steadily consolidating as the largest five producers led by Xiaomi (XI) and Samsung capture more market share. Notably missing in the top 5 was Apple, which shipped fewer than 1 million iPhones in India in the first half of 2018 and the iPhone represented less than 2% of the 60 million smartphones shipped in 1H18. During the same period, Samsung and Xiaomi shipped 17.4 million and 19 million smartphones respectively. 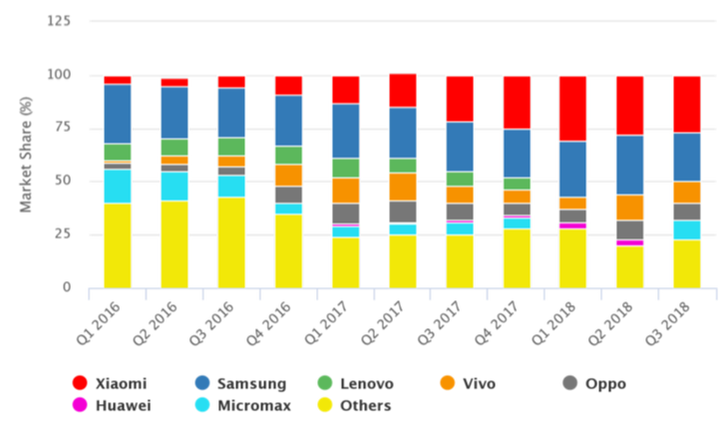 Source: Counterpoint Research, Dazeinfo
​Apple's new head of country, Michel Coulomb, is reversing the previous sales strategyby moving to a system of controlled distribution. Apple's previous strategy of open distribution gave significant control to re-sellers who offered iPhone products at discounted rates and offered non-standard pricing across the county. Due to the lack of control Apple has had in the Indian retail environment and the roadblocks it has encountered in the opening of its own stores, the firm has become over-reliant on online sales in India. In May 2017, the Economic Timesreportedthat 50-55% of iPhone sales in India were online, compared to the industry average of 30%. Apple is pursuingplansto open flagship retail outlets in New Delhi, Bengaluru and Mumbai. The company has long attempted to open retail stores in India but has not been able to meet the government regulations to do so. One of these barriers is a requirement to manufacture a minimum of 30% of its products in the country. With plans to start making the iPhone 6s in country, along with using more local suppliers, it is finally on track to opening these retail locations. However, this strategy does not address Apple’s fundamental problem that there phones are too expensive and that the Indian people are not interested in an older model, when the Android models are less expensive and offer comparable or better features.

As we previously reported, Apple will begin assembling its top-end iPhones in India through Foxconn in early 2019. Foxconn will begin assembly of these higher-end iPhones at a plant in Tamil Nadu in southern India. This announcement made in late December 2018 is a sign that Apple is paying attention to the Indian market. Apple’s production contractor Wistron (announced in January 2019 that it will invest $340 million in its Indian production facilities where it currently assembles iPhone SE and iPhone 6. are developments that the Indian government has long awaited.