Professor Kyoung-Duck Park of the Department of Physics within the Ulsan National Institute of Science and Technology (Ulsan, Republic of Korea) is working on controlling the brightness and wavelength of light emitted by quantum dots Perovskite quantum dots (pQDs) can enable tuning of their optoelectronic properties over a wide range but manipulation at the single emitter level has never been attempted until now.

The approach is based on tip-induced dynamic control of strain, bandgap and quantum yield of single CsPbBrxI3–x pQDs via controllable plasmonic nanocavity in conjunction with so-called Tip-Enhanced Photoluminescence (TEPL) spectroscopy.[1]
A recent article by the team on this topic is entitled. The team reported that single CsPbBrxI3–x pQDs were clearly resolved by the use of hyperspectral TEPL imaging with ∼10 nm spatial resolution. The plasmonic tip was then used to directly apply pressure to a single pQD. The result was a bandgap shift up to ∼62 meV. This, in turn, resulted in a Purcell enhanced photoluminescence increase as high as ∼105.  (Note: the Purcell effect is the enhancement of a quantum system’s spontaneous emission rate by virtue of its environment.)  By systematically modulating the tip-induced compressive strain applied to a single pQD, the team demonstrated dynamical bandgap engineering in a reversible manner. In addition, they facilitated quantum dot coupling of a pQD ensemble by the use of ∼0.8 gigapascal tip pressure at the nanoscale. 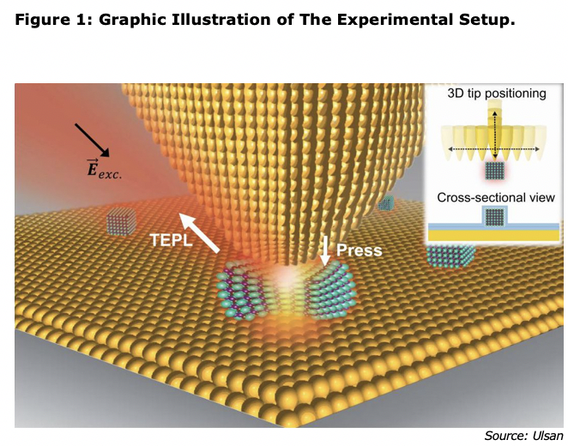 [1] The article “Tip-Induced Strain Engineering of a Single Metal Halide Perovskite Quantum Dot” was published in ACS Nano 2021, 15, 5, 9057-9064 and is available for purchase and here.

Conclusions by the team:


Original Content from Ulsan National Institute of Science and Technology, Kyoung-Duck, kdpark@unist.ac.kr and summarized by Arthur Berman in DisplayDaily