TrendForce puts the market share of AMOLED phones for 2020 at 33%, a 2% increase Y/Y, thanks to the release of Apple’s new iPhone 12 models in 2H20. LTPS LCD smartphone market share is projected to be down 2% Y/Y. The rise in entry-level and mid-range segments are demand for a-Si LCD smartphones, some of which are now in short supply. The market share of smartphones with a-Si displays is estimated to be 29% this year, flat Y/Y. TrendForce sees an 8.8% Y/Y growth in smartphone shipments in 2021, with OLEDs taking a 38% share , 31% Y/Y and up 43m phones.

Source: TrendForce ​
Q320 saw the smartphone market bounce back after the dreadful first and second quarters, with Samsung reclaiming the top spot from Huawei. It also saw Xiaomi emerge as the number three brand globally, passing Apple during this period.

​Source: IDC, Counterpoint
Canalys has revealed the top 10 smartphone models shipped during Q320, and Apple’s iPhone 11 was far and away the number one device during this period, shipping over 16 million units, according to the tracking firm, followed by the iPhone SE 2020 in second place. Since Apple didn’t release the iPhone 12 series in Q320, Q4 is likely to see Apple regaining the 3rd or even the 2nd spot in the rankings. The top Android phone model for Q320 was the Galaxy A21s in third place, nipping at the iPhone SE’s heels. Samsung’s phone sports a power-efficient processor and a 5,000mAh battery, making for a device that gives two days of usage. Toss in a ~$200 price tag and a quad rear camera setup, and it seems like the Korean brand hit the mark with this device. 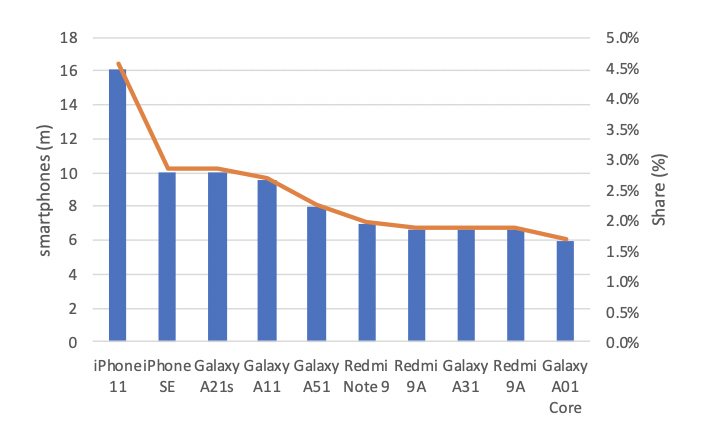 Source: Canalys
Samsung’s budget phones accounted for five out of the 10 spots on the list. These phones were the Galaxy A11 (fourth), Galaxy A51 (fifth), Galaxy A31 (eighth), and Galaxy A01 Core (tenth). It suggests that the brand’s focus on value for money phones is paying dividends once again. Xiaomi was the only other manufacturer in the top 10, with the Redmi Note 9/Redmi 10X 4G (sixth), Redmi 9 (seventh), and Redmi 9A (ninth) making appearances. And with the firm reportedly cracking the top three globally and in Europe in Q3, we’re not surprised to see these phones here.