Amazon announced the Halo band for $65, which includes six months of access to the app. After the first six months, customers will have to pay $4 a month to continue using the app. Once it ships in a few weeks, Halo will be $99, also with the $4/month fee. The app and the band work with both iPhones and Android devices. Though that pricing puts the Halo in competition with Fitbit’s fitness trackers, Amazon—which has also purchased online pharmacy PillPack, developed both virtual and in-clinic employee health centers, and sought out HIPPA compliance for its Alexa voice assistant—is taking a different approach to health than its competitors in wearables. The company thinks Halo’s real value is in the app. Data tracking is divided into four sections, Activity, Body, Sleep, and Tone. The app also offers Labs, a series of health challenges designed by a range of professionals and expert organizations. While Activity and Sleep offer standard health-tracking capabilities, Body, Tone, and Labs represent Halo’s distinguishing features. 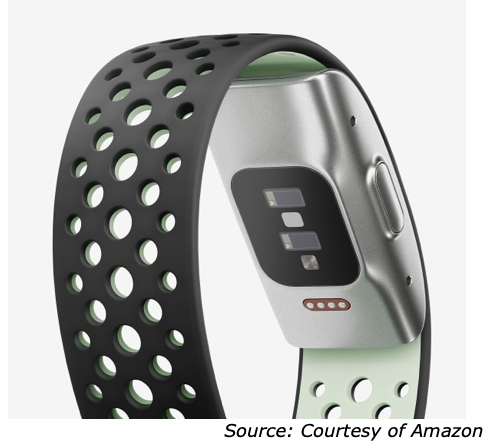 The Halo tracker is extremely simple: just a piece of water-resistant fabric and a small sensor laden bit of hardware that lays against the wrist. There’s no display, notifications, clock, or other features that have become standard fare on even basic fitness trackers from other companies. (Like other wrist wearables, it does offer band options in several colors and materials.) Halo tracks movement, heart rate, skin temperature, and the tone of a person’s voice. Notably, it doesn’t track heart rate variability. Both the Apple Watch and Fitbit’s devices have added heart rate variability in recent versions of their wearables, seemingly as a test of their ability as a diagnostic tool. Amazon’s tracker captures steps, duration and intensity of activity, as well as sedentary time to generate an activity score. While any activity will raise your score, you’ll be awarded more points for running as opposed to walking. The band can detect the difference between walking and running, and you can manually mark if you swim, cycle, or perform some other form of exercise. Sedentary time can negatively impact your score if you sit for more than eight hours. The app also measures activity on a weekly rather than daily basis. “It’s more aligned with the [CDC] guideline recommendations, which clearly state that people should get 150 minutes of moderate exercise on a weekly basis at a minimum,” says Dr. Maulik Majmudar, a cardiologist and Amazon’s chief medical officer. Before joining Amazon in 2018, he practiced at Massachusetts General Hospital.

Like the Apple Watch, Fitbits, and the Oura Ring, Halo identifies sleep duration and how long you linger in light sleep, REM sleep, and deep sleep. It also measures and monitors skin temperature at the wrist, to see if how this changes over the course of the night correlates to your sleep quality. Skin temperature is not the same as internal temperature, so it would not be a sound way to determine if someone has a fever, for example.

Body is one of the most distinctive elements of the Halo app. Using a phone’s camera, it captures a three-dimensional model of a person’s body to help them track their body changes over time and to track its fat percentage. Majmudar says, “Body fat percentage is actually much better indicator of overall health than weight or body mass index [BMI] alone.” A recent meta-analysis, published in the journal Nature, shows that BMI isn’t a great indicator for obesity, which doctors use to look out for obesity-related disease. However, getting a good reading on a person’s body fat has historically been cumbersome and expensive. Amazon now suggests it can make this determination using a phone camera. To get their body fat percentage, people must wear “tight, minimal” clothing, such as bike shorts and a sports bra. Placing their phone 4-6 feet away, they then take capture photos or “body scans,” one front facing, one back, and one from each side. Artificial intelligence renders those photos into a 3D view of their body shape. Once calculated, the body fat percentage number is presented alongside a corresponding national average based on a person’s gender, age, height, and weight. 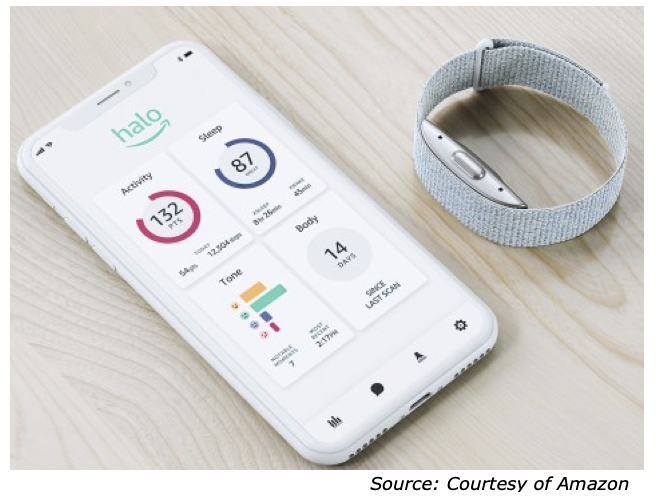 The body model can be morphed to show how a person might look if they gained or lost weight. The visualization is designed for those trying to work towards certain body goals. However, it could also be dangerous fodder for anyone suffering from body dysmorphia, eating disorders, or compulsive exercising.

Majmudar says that by default, the body-scan photos are processed in the cloud and then deleted after 12 hours. The body model is only stored locally on the phone. Tone is the strangest of the app’s features. Using its embedded microphone, the band listens to your voice throughout the day and detects its tone—positive, sad, irritated, or otherwise. The idea is to address your social and emotional health.

To use Tone, you have to create a voice profile by reading a piece of text. That way, it can recognize and measure only your voice, not other ones it may pick up. When Tone is turned on, it runs passively and intermittently in the background, picking up on snippets of conversations throughout the day. It then tells you how you sounded to other people. Among the list of emotions is content, concerned, happy, and tired.

“This gives you a simple way to reflect on your communications and interactions throughout the day,” says Majmudar. This feature also gives you summaries of your mood throughout the day, highlighting when you were noticeably energetic, positive, or warm. It also notes outlier moments when you sound different than they ordinarily do. Though the feature may seem creepy, mood trackers are increasingly available. People who suffer from mood disorders sometimes use these apps to better understand and track their shifting emotional states. It’s not clear how popular these technologies are among people who do not suffer from a mood disorder or are not aware that they suffer from one. For those that may be concerned about Amazon tracking their every word, the company says this audio never goes to the cloud. It’s processed on your phone, and isn’t stored. Amazon appears to be drawing a hard line on privacy here. In the past, its stance on user privacy was less clear: Last year, Bloomberg revealed that Amazon workers were listening to bits of conversation recorded by Alexa in order to enhance the digital assistant’s comprehension skills, a practice Amazon then eliminated.
When it comes to Halo, the company says that won’t be the case. “We can’t physically collect the data even if it were to improve the algorithm or the service itself, because we felt the customer privacy was more important than that,” says Melissa Cha, who led product development for Halo.

Amazon is balancing its consideration for privacy with a healthy amount of data sharing. In order to make the data Halo collects useful, it’s turning to partners. WW (Weight Watchers) users can link to the Halo app activity, so they can collect FitPoints. Cerner, the electronic health record provider, can also hook into Halo and transfer a person’s health data over to their larger medical record. Cha says the app will only share data when users expressly consent by linking the apps together. The Labs feature—which provides activities that users can perform to change their health outlook—also draws on Amazon’s partners. For instance, the Mayo Clinic offers a pet-free bedroom Lab that is supposed to lower sleep interruptions from a restless pet. Weight loss program LifeSum, has an activity for reducing calorie intake. Other partners include Apptiv, Orange Theory, Harvard Medical, and the American Health Association. These activities provide one more way for users to put that wrist band to use (and perhaps ensure that it doesn’t get relegated to a drawer somewhere).

How well does Halo track and analyze the data it collects? For now, it’s anyone’s guess. Majmudar says that Amazon has done lots of internal testing, but has not yet published any studies verifying the Halo’s capabilities. A representative for the company says that the artificial intelligence behind all these features was developed on a pilot group, which generated “tens of thousands” of voice recordings, body scans, and other data inputs to train its algorithms. The company also used publicly available audio to train Tone. Majmudar says the data set its AI trained on is diverse, but that Halo is for an English-speaking audience.

In 2020, a lack of data transparency around efficacy may be a mark against Halo. Many other devices, by virtue of having been around so long, have both been the subjects of their own studies and tested independently. In lieu of actual hard evidence, Majmudar frequently touts the methodology behind Halo’s analytics, saying it’s based in hard science. For example, the algorithms for measuring sleep quality are measured against polysomnography, a test that looks at a variety of factors including brainwaves to gauge sleep quality. For body fat percentage, Halo’s analysis is measured against dual energy X-ray absorptiometry (DXA), a special kind of X-Ray that parses out fat, muscle, and bone.
​
Amazon has good reason to want to get this right. But we won’t know how well it’s done until Halo arrives and independent researchers put it to the test. Still, its first foray into health wearables is refreshing departure from what we’ve come to expect.

​Fitbit announced a number of new devices, including a hero smartwatch in the Fitbit Sense, which features  all-day activity tracking, sleep tracking, built-in GPS, smartphone notifications with Quick Replies for Android users, and on board Spotify and Deezer control. New sensors include an Electrodermal Activity sensor designed to help indicate the body's response to stress.  Fitbit continues to expand the opportunities for its customers with new sensors to track a number of things.