With Sony’s sales down 5% Y/Y in Q120 and smartphone shipments at its lowest level in ten years, hedge fund Third Point's plea to disband itself into two separate entities was ignored. Sony's management instead began a consolidation process to reorganize the company. Its recent decision to acquire all public shares of its financial unit and take it private signals that Sony is eager to establish itself as a powerful conglomerate with interests in different industries all around the globe. The company is liquid enough to finance all of its existing operations, and some of its businesses continue to generate profits. As a leader in gaming and image sensor technology, Sony has numerous advantages against its competitors. The opinion of Dan Loeb’s Third Point is now irrelevant since the management of Sony will be consolidating the company and establishing itself as a powerful conglomerate. The purchase of the remaining shares of its financial unit followed the company's decision to merge its imaging, sound, and mobile communications divisions into a one-unit two months ago. Third Point failed to force the split of the company back in 2013, and failed to do so this time. With its $1.5 billion stake in a $76 billion company, Third Point voting power is too small to force a change that it wants.
​
Sony has always been a conglomerate in one way or another, and since its latest major restructuring in 2012, all that it was doing is reinvesting profits from its most profitable units to those that have a great potential to create value in the long run. In the last five years alone, the company's stock appreciated by 100% thanks to this strategy. By taking its financial arm completely private, Sony is following the footsteps of Alibaba (BABA) and Apple (AAPL) that made finance business a stable profit-generating machine. For the fiscal year that ended in March, the finance unit alone produced a record ¥129.6 billion (~$1.21 billion) in profit. Since gaming is the company's biggest business, generating over 20% of the overall sales, Sony's valuation multiples is compared to its gaming peers. The table below clearly that Sony's RV/Revenue, EV/EBITDA, and P/E ratios of 0.92x, 6.18x, and 14.51x, respectively, are below the industry's median. At the same time, the company's P/E ratio is also below the S&P 500 median P/E ratio of 21x, shows that Sony is undervalued to its peers.
​
Table 1: Sony Comparables 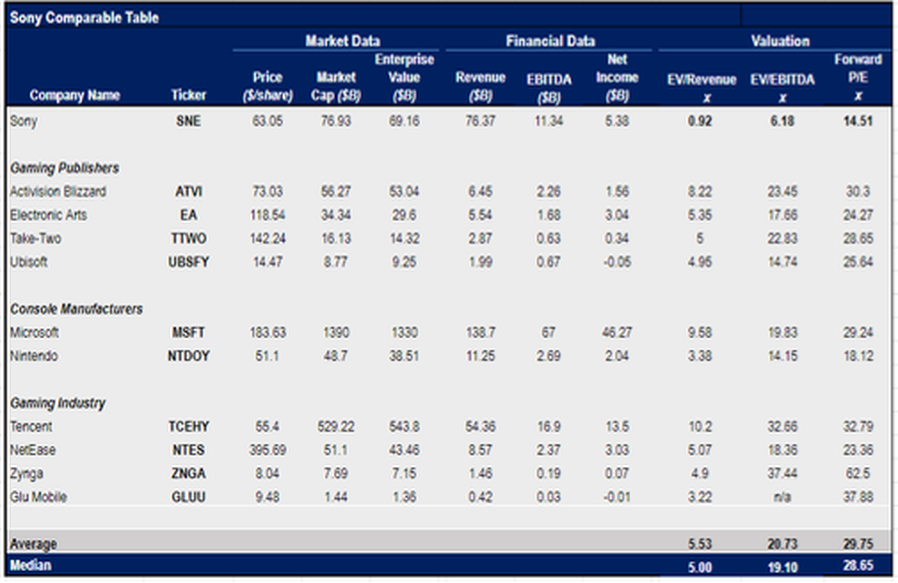 Source: Yahoo Finance
​A year ago, similar to other Fortune 500s, Sony announced a share repurchase program, while all the previous years, it was hoarding cash and reinvesting some portion of it into different businesses until they were stable enough to generate excess profits on their own. At the end of March, the company's net cash position was ¥149 billion (~$1.39 billion), and seems sufficiently liquid to survive the pandemic. 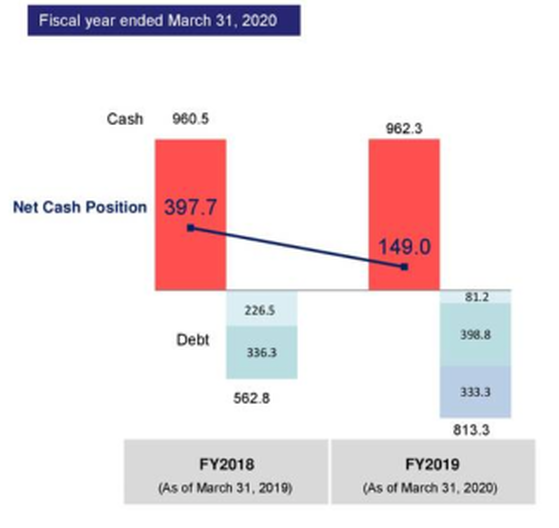 Source: Sony
Sony's PlayStation 4 is the best-selling gaming console in the world. Since its launch in 2013, the company sold more than 110 million units. In less than a year, it expects to release the next-generation console PlayStation 5. The company dismissed those rumors of a delay, and PlayStation 5 is on track to be released on time later this year. March was the best month in terms of game sales in more than a decade. Newzoo estimates that the gaming industry will grow at a CAGR of 8.3% and will be worth $200 billion in just three years.

Imaging and Sensing also has a high potential to create value this year. Sony is the leader of image sensors business with a 50% market share, but is being challenged by Samsung.  Its clients include Apple and Huawei and while the smartphone market is will take a hit this year, the recovery should be swift later on. The division is expected to deliver 30% of the overall profits by 2025. Considering that, in FY19, the business's sales and operating profits increased by 21% and 63%, respectively, spinning-off the division is unlikely. 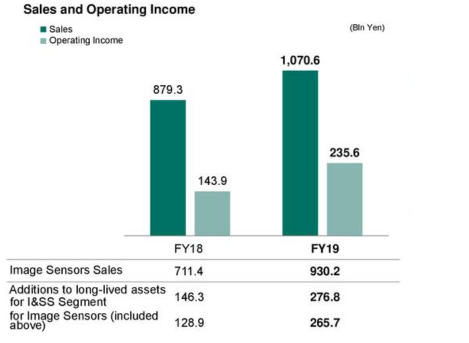 Source: Sony
Sony Mobile Communications quarterly smartphone shipments hit a 10-year low of 400,000 units in the first quarter of 2020 despite robust sales of Xperia 1 II and Xperia 10 II, in Japan. Shipment prospects for the second quarter remain flat in heavily promoted Europe and Latin America as demand in these two regions has been crippled by the coronavirus pandemic. Sony had the second largest market share in Japan in the first quarter at 10%, it lagged top vendor Apple by 50bp.  In addition to the pandemic, Sony faces strong competition from Samsung, Motorola (Lenovo), Huawei, Xiaomi and LG in Latin America. Sony Mobile's share in the region has fallen to around 1%. With Samsung, Apple, Xiaomi and Huawei accounting for nearly 90% of the market in Europe, Sony is having difficulty expanding there in the near term. In hopes of reviving growth, it has released its first dual mode 5G model, Xperia Pro, supporting both sub-6GHz and mmWave technologies.
​From: DigiTimes and Seeking Alpha