Phosphorescent light-emitting diodes make use of guest–host blends such as Ir(ppy)3:CBP to achieve high external quantum efficiencies based on heavy metal atoms with strong spin–orbit coupling capable of promoting inter-system crossing (ISC) of excitons from the singlet to the triplet state, as well as radiative triplet emission.2,5–7  An archetypal phosphorescent OLED blend that has a reported high efficiency is composed of fac-tris(2-phenylpyridine)iridium(III) [Ir(ppy)3] as the guest and 4,4′-bis(N-carbazolyl)biphenyl (CBP) as the host. This blend has been studied to determine the optimal guest concentration,8 exciton lifetimes and diffusion mechanisms,9–14 and loss processes, such as triplet–triplet annihilation and non-radiative triplet decay.15–18 Ir(ppy)3:CBP blends have also been subject to detailed computational analysis, with molecular dynamics (MD) simulations showing that guest molecules tend to form clusters within the blend, rather than being randomly distributed,19 and kinetic Monte Carlo (KMC) simulations revealing that charge diffusion is primarily guest-based, with guest clusters acting as multi-molecule traps.20

Questions remain regarding the details of the exciton diffusion process, particularly concerning the degree of triplet guest-confinement, how exciton diffusion is dependent on the distribution of the guest in the host, which can currently only be addressed at the atomic level via computational modeling, In some new work sponsored by the Australian Government Research Training Program Scholarship. P.L.B. kinetic Monte Carlo simulations were utilized to gain insight into exciton diffusion in Ir(ppy)3:CBP blend films. The effects of both guest concentration and exciton density on various system properties are analyzed, including the probability of singlet excitons being converted to triplets, and the probability of those triplets decaying radiatively. Significantly, these simulations suggest that triplet diffusion occurs almost exclusively via guest–guest Dexter transfer and that concentration quenching of triplets induced by guest–guest intermolecular dipole-dipole interactions has a negligible effect at high exciton densities due to the prevalence of triplet–triplet annihilation. Furthermore, results for vacuum deposited morphologies derived from molecular dynamics simulations are compared to the results obtained using a simple cubic lattice approximation with randomly distributed guest molecules. It showed that while differences in host-based processes such as singlet diffusion are observed, the results on the fate of the excitons are in agreement for the two morphology types, particularly for guest-based processes at low guest concentrations where guest clustering is limited. They investigated exciton diffusion and exciton–exciton interactions in Ir(ppy)3:CBP blend films using KMC techniques to simulate photoexcitation experiments. The efficiency of these simulations has enabled a wide parameter space to be sampled while maintaining good statistics. The sensitivity of the calculations to the details of the film morphology generation method was also investigated by comparing results of films at 6 wt. %8 guest concentration obtained using a randomized cubic lattice structure, with those obtained using morphologies generated with MD simulations in which the process of vacuum deposition has been modeled explicitly in atomic detail.

Exciton-only KMC simulations were performed with 12 different initial densities of randomly generated singlets between 3 × 1016 cm−3 and 3 × 1019 cm−3 to emulate short laser pulses of varying intensity and give realistic initial excitation densities.21 The KMC model was based on the work we have published previously.20,22 Singlet generation was treated as instantaneous at the beginning of the simulation. A uniform generation profile was used, meaning that all molecules in the system had an equal probability of singlet generation. If a chosen generation site was already occupied, that singlet was discarded and replaced. We note that only excitons and exciton–exciton (and not exciton–polaron) interactions were considered in this model to enable efficient simulations that do not require computationally expensive evaluation of electrostatic interactions, thereby allowing a wide parameter space to be sampled. An overview of the modeled processes is provided in Fig. 1. Upon photoexcitation of the blend, singlets were allowed to diffuse via host–host and host–guest Förster transfer events.12 Once a singlet was on a guest molecule, it could cross into the triplet state via ISC, and it was assumed based on the fast ISC rate of Ir(ppy)315 that the singlet did not diffuse any further. That is, guest–guest and guest–host singlet transfers were not considered in the model. Competing with this singlet to triplet conversion process were radiative and non-radiative singlet decay events on the host. These decay processes were treated as having a fixed rate and were only considered for singlets on the host molecules (again due to the fast ISC rate once on the guest). 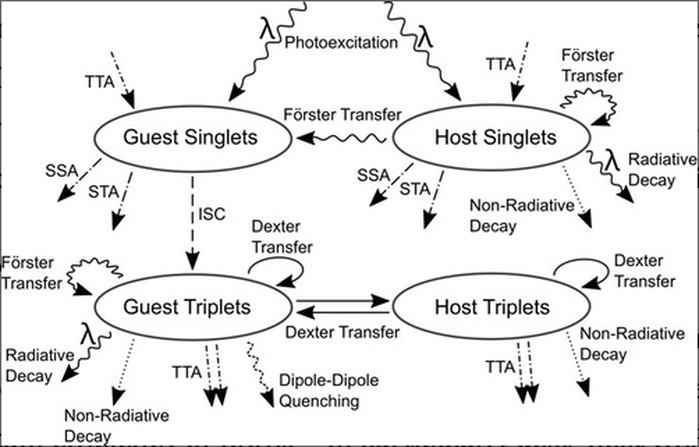 In addition, a triplet loss process with r−6 distance dependence that is independent of the triplet density has been observed when Ir(ppy)3 molecules are in close proximity.15,17,18,24 While the exact physical description of this process is unclear, it has previously been attributed to different factors including the formation of a weakly emissive excimer state,15 repeated intermolecular energy transfer (emission and absorption between chromophore pairs) leading to the deactivation of the excited state,17,24 and to excitation transfer to a quencher.18 In this work, we model this triplet loss process as a dipole–dipole interaction25 with a thermal activation energy of 170 meV. This value was chosen to fit the concentration dependent photoluminescence efficiency of Ir(ppy)3:CBP blends, as presented by Kawamura et al.26 (see Fig. S1 of the supplementary material), and is reasonably close to the value of 121 meV reported elsewhere.16,17 The event rates for this process were parameterized in the same manner as guest–guest Förster transfer events [see Eq. (3) below] and were calculated for all neighboring guest molecules within a 5 nm radius. Triplets that undergo this transfer were removed from the system immediately for simplicity. To differentiate from other concentration quenching processes, we will refer to this process as dipole–dipole quenching. Note that while we calculated this dipole–dipole quenching rate in terms of activation energy, it could instead, without any significant change to the rate calculation, be interpreted as a probability that a given Förster transfer event results in the deactivation (loss) of that triplet. Note also that although the occupation state of the neighboring guest molecule was not considered in these rates for simplicity, this has no meaningful effect on the overall probability of radiative triplet decay, as both dipole–dipole quenching and triplet–triplet annihilation were assumed to result in the loss of one triplet. The simulations were repeated for all integer guest concentrations between 1 and 15 wt. %. The morphologies used for these simulations were based on a cubic lattice with randomly distributed emitter molecules. KMC simulations were also performed using the morphology of a blend containing 6 wt. % guest, generated by simulating the process of vacuum deposition using molecular dynamics techniques.19,27,28 The results for each concentration were averaged over five cubic lattice morphology realizations, with at least 20 repeats per realization per data point and up to 200 repeats at low initial excitation density. To obtain converged results at extremely low exciton densities where less than one singlet would be present in the periodic volume on average, simulations were performed in which excitons were treated as non-interacting. In this case, 1000 singlets were generated, and 20 repeat simulations were used per morphology realization. Note that in the results, the lowest initial excitation density plotted corresponds to this non-interacting case. For the MD-generated morphologies, three realizations were used with at least 100 repeats per realization. For a clearer comparison between results from the MD-generated morphology and those from the cubic lattice morphology, up to 2000 repeats per realization were used at low exciton densities in the 6 wt. % guest blends. 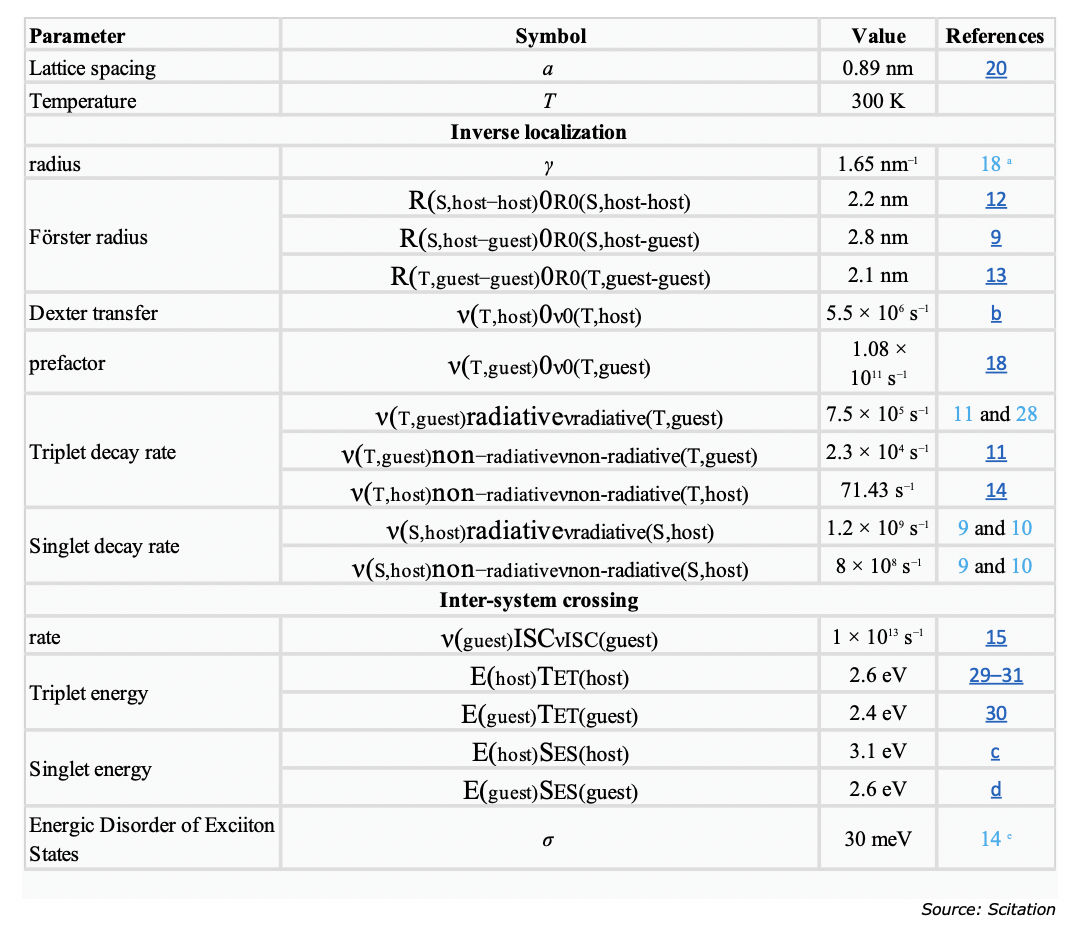 aFor simplicity, the inverse localization radius for triplet excitons in CBP was assumed to be equal to that of Ir(ppy)3.
bTriplet Dexter transfer rates in CBP were chosen such that the average triplet diffusion length was 140 nm14 in a neat, fully periodic, cubic lattice system.
the singlet energy of CBP was approximated as the HOMO–LUMO gap.
the S1 energy of Ir(ppy)3 has been calculated to be 0.2 eV above the T1 energy.32
eEnergetic disorder was assumed to be the same throughout the system for both singlets and triplets. 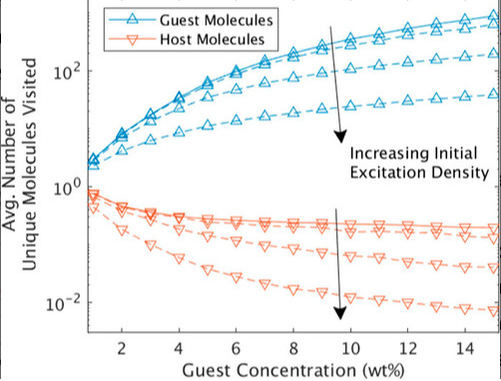 Source: Scitation
​Note the logarithmic scale on the y axis, as guest to host triplet transfer is an unlikely process.


Kinetic Monte Carlo modeling was used to simulate exciton dynamics in Ir(ppy)3:CBP OLED films under photoexcitation at a range of guest concentrations and exciton densities. It was found that even at low guest concentrations, triplet diffusion occurs almost exclusively via guest–guest Dexter transfers, thereby increasing the likelihood of triplet–triplet annihilation. This would imply that under normal device operation, triplet–polaron quenching will have a similarly large contribution to efficiency roll-off, shown previously that charge transport is also predominantly guest-based.20
In addition, results from morphologies generated using molecular dynamics to simulate the process of vacuum deposition in atomic detail suggest that to a first approximation, KMC simulations based on a simple lattice model are representative of real systems in the case of processes that occur primarily on low concentration trapping sites. While the fate of singlets in the modeled 6 wt. % guest blends was comparable between the cubic lattice and molecular dynamics morphologies, some differences were observed in their diffusion dynamics, indicating that processes involving the host molecules are not as well-captured in the cubic lattice model. Further differences in both host- and guest-based processes may be observable under a more detailed model that explicitly accounts for factors such as molecular orientation.

The full report is available from the Journal of Chemical Physics.