Vertical Divider
The company expects 2019 revenue of between $325m and $350m. Under ASC 605, 2019 revenues are expected to be in the range of $395 million to $420 million. The market reacted positively to the UDC posting and was up over 20% the day after the announcement. Here are some reports of market researchers about the OLED display market that support UDC’s optimism for 2019.

DSCC has updated its OLED market forecast for 2019, and the company expects OLED revenues to reach $28.6 billion (up from $26.5 billion in 2018 - but lower than their previous estimate. In terms of area shipments, DSCC expects a 25% increase compared to 2018, with strong growth in both the TV and smartphone market. 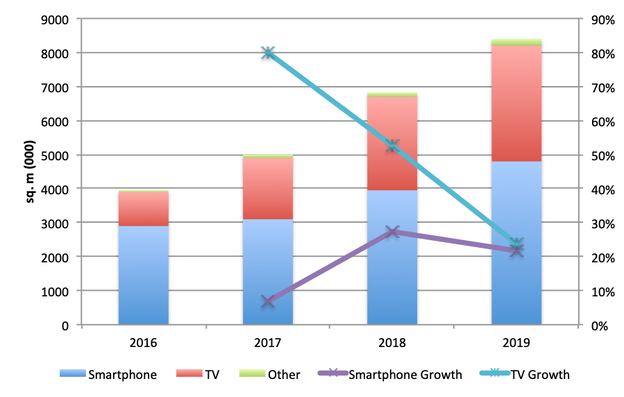 Source: DSCC
​OLED unit shipments are expected to reach 572 million units, growing by 16% compared to 2018.The next figure shows a comparison of the actual revenue for OLEDs and the 2019 forecast of the three major researchers following the OLED industry. The growth rates are generally in-line, with South Korea’s UBI, the most optimistic and IHS, the most conservative. 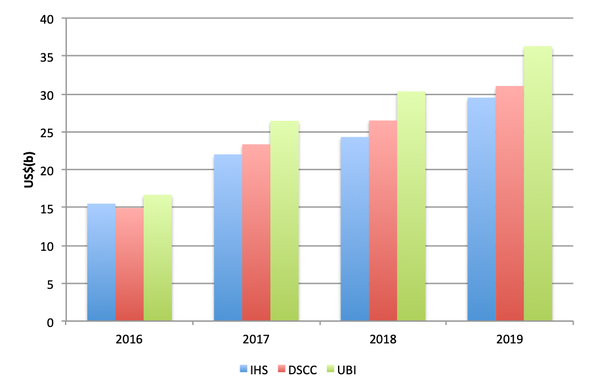 Source: DSCC, IHS, UBI
Another strong sign for UDC is that aggregate production capacity for small/medium AMOLED panels in China makers is expected to expand at a CAGR of 59.4% from 2018-2022, according to Digitimes Research. In its 13th Five-Year Plan, China has highlighted the self-sufficiency in the supply of AMOLED panels, especially flexible ones, prompting existing panel makers and newcomers to jump on the bandwagon. China will have six operational 6G flexible AMOLED panel lines during 2018-2019, triggering concerns about possible oversupply and calls for slower expansion. But China panel makers including BOE Technology, Visionox and Kun Tong still announced plans in the second half of 2018 to have their 6G flexible AMOLED panel lines start production as scheduled. BOE has planned three AMOLED production lines in the southwestern city of Chongqing, and will plan its fourth in Fuqing, Fujian province, which is slated for official production by 2022. Meanwhile, Visionox, after a capital injection from China Fortune Land Development, has been expanding AMOLED production, with its monthly capacity expected to outstrip that of Tianma Microelectronics as China's second largest maker of AMOLED panels in the fourth quarter of 2019. Tianma and other China makers Everdisplay Optronics and China Star Optical Technology (CSoT) are more conservative in capacity expansion. Tianma is slated to complete capacity expansion at its 6G AMOLED panel line in Wuhan, Hubei province by 2021, with monthly capacity to increase of 37,500 substrates/month. Everdisplay and CSoT have each set monthly capacity for their similar lines at 30,000 substrates/month.