​TCL provided a sneak peek at its 10 Series smartphones during CES 2020. Now, the company fully revealed its affordable lineup, which includes three new phones: the TCL 10 5G, the 10 Pro, and the 10L. The trio shares the same basic mix of features, such as TCL Display-sourced screens, Snapdragon 700/600 series processors, and quad-camera setups on the rear. The 10 5G is the first 5G-capable smartphone from TCL. The 5G radio (bands n1/3/8/28/77/78) can handle up to 2.3Gbps downloads. TCL is playing coy on naming in which markets the 10 5G will be able to surf at warp speed. The phone has a 6.53-inch Full HD+ display with a 91% screen-to-body ratio. It is powered by a Snapdragon 765Gprocessor with 6GB of memory and 128GB of storage. A 4,500mAh battery with QuickCharge 3.0 provides the TCL 10 5G with the juice it needs to get through the day. TCL opted for a big megapixel count for its premier phone. Four cameras adorn the rear, a 64MP main, 118-degree 8MP ultra-wide, 5MP macro, and 2MP low-light sensor. The phone can capture video up to 4K at 30fps. On front, you’ll find a 16MP selfie camera. Other features include Android 10 and TCL UI, 3.5mm headphone jack, dual-band WiFi, and support for microSD cards. The TCL 10 5G will be available in select markets later this year for €399/£399.

The TCL 10 Pro is the first phone from the company to offer a curved AMOLED screen. The 6.47-inch Full HD panel is certified to support HDR10 content from the likes of Netflix, making the phone a natural for entertainment. TCL developed an Edge Bar that makes app shortcuts easy to locate. Bezels are kept to an absolute minimum, giving the phone a screen-to-body ratio of 93%. The screen also hides the phone’s fingerprint sensor, which is buried under the glass. A Snapdragon 675 processor with 6GB of memory and 128GB of storage powers the phone. It’s surprising that TCL opted for a 2018-era processor. The TCL 10 Pro has the same 4,500mAh battery with QuickCharge 3.0 found in the 5G model. TCL changed up the camera equation a bit. The 10 Pro also has a 64MP main camera, but the 123-degree ultra-wide has a 16MP sensor. The 5MP macro and 2MP low-light sensors are the same, but the selfie camera jumps to 24MP. People who buy the 10 Pro will be able to capture video up to 4K at 30fps.

Source: Android Authority
Other features mirror those of the 10G. That means Android 10 with the TCL UI (with a promise to update to Android 11), 3.5mm headphone jack, WiFi, Bluetooth 5.0, and support for microSD cards. It will be available in Europe, North America, Australia, and the UK beginning in the second quarter for €449/$449/£399. 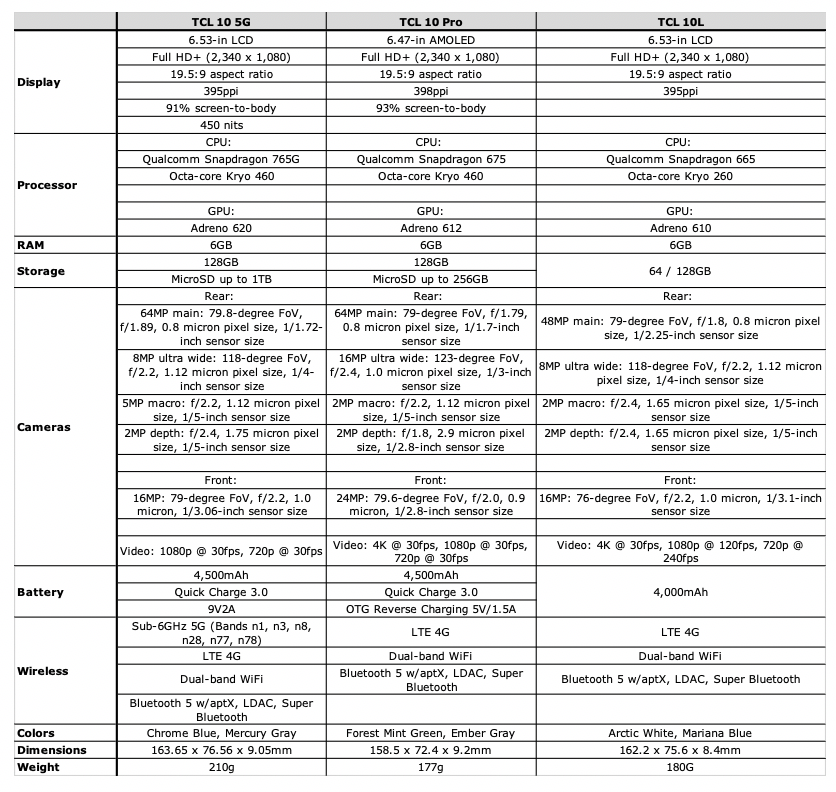 Source: Company
Last in this trio of TCL 10 Series phones is the 10L. It carries over the same 6.53-inch Full HD+ display with a 91% screen-to-body ratio as the 5G model, but drops the processor down to the Snapdragon 665. It offers the same 6GB of memory and 128GB of storage as the others, though a 64GB variant will also be available.
The camera configuration downgrades the sensors yet again. The 10L has a 48MP main camera, an 8MP ultra-wide, a 2MP macro, and a 2MP low-light. It can record 4K video at up to 30fps, or 720p video at up to 240fps for cool slow motion footage. The selfie camera rates 16MP. The TCL 10L also features Android 10 with TCL UI, Bluetooth 5, WiFi, microSD card support, and a rear-mounted fingerprint reader. The 10L will be sold in Europe, North America, Australia, and the UK beginning in the second quarter for €249/$249/£199.

TCL is clearly moving into the middle of the market with these phones. Where it forged a solid reputation making entry-level fare under the Alcatel brand and flagship class with its foray into BlackBerry, we now see TCL looking to take advantage of its growing brand power.