Huawei’s loss in Europe throughout the first three quarters of 2020 turned into success for Samsung. Russia was a similar story as Samsung regained the top spot from Huawei in Q3 2020. Samsung Mobile’s marketing team was doing its part to pour salt in Huawei’s wounds, Samsung Display made sure it kept Huawei as a client. It sought and reportedly gained approval from the US Department of Commerce for the right to sell OLED panels to Huawei.

Samsung’s mid-range Galaxy A and M series thrived and the company is offering three Galaxy S20 models plus a dedicated Fan Edition Galaxy S20 FE, and two Galaxy Note 20 flagships. Samsung is the top Android tablet maker and in 2020 released the Galaxy Tab S6 Lite, the Galaxy Tab S7 and Galaxy Tab S7+, as well as the Galaxy Tab A 8.4 and the Galaxy Tab Active 3. Huawei has released a handful of tablet models of its own but none of them have a rugged shell or come with an input device similar to the S Pen. This is equally valid for Huawei’s smartphone portfolio.

As for smartwatches, both Huawei and Samsung were up Y/Y  in Q3 2020, with Samsung holding 10% of the market (up from 8%) and Huawei having 15% market share (up from 10%), according to Counterpoint Research. Samsung achieved 10% market share with fewer wrist wearable models released in 2020. They were the Galaxy Watch 3 and Galaxy Fit 2. Comparatively, Huawei has released five smartwatch models including one that resembles the Apple Watch, and a kid’s watch. Counterpoint appears to be confusing Wearables with Smart Watches as shown by the following 2 tables from IDC. 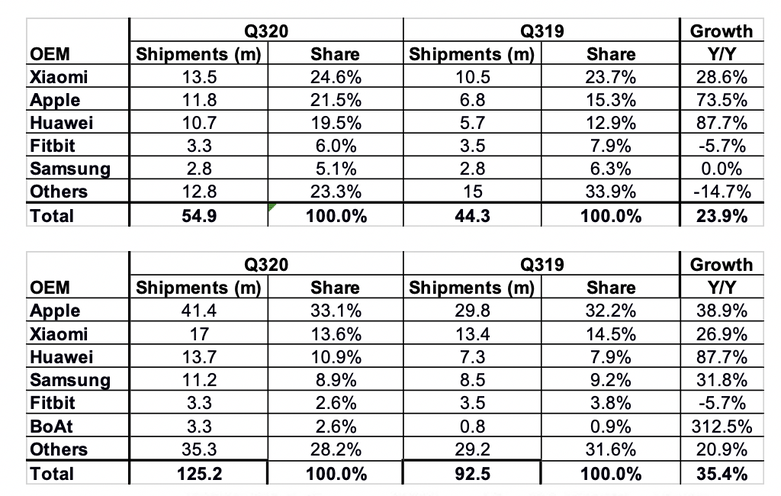