Vertical Divider
Then, Samsung Display CEO Lee Dong-hoon told The Korea Herald, “The company is making good efforts” to launch QD-OLED panels (Project C) in the near future. Samsung Display has now halted production at one of its two 8G LCD TV production lines in South Korea. The line has been in operation since 2007 when Sony and Samsung created S-LCD to jointly produce LCD TV panels. The company also shut down one of its Gen.8.5 LCD lines with monthly capacity of 90,000 units in Asan, South Chungcheong Province, this month, and it will cut 30,000 units at another line starting next month. There are two lines (8-1 and 8-2) each divided into phase 1 and 2. Line 8-1 phase 1 is the one that has been shut down. Samsung is expected to also shut down the rest of the 8G lines. At its highest production level Samsung built 250,000 LCD panels in South Korea every month. Samsung is converting one Gen 8.5 LCD line into a QD-OLED production line with an investment of 10 trillion won ($8.3 billion).  The main reason for the latest cut in LCD production is the falling profitability of the LCD panel business amid an oversupply triggered by Chinese competitors. Samsung Display has shut down operations at one of its LCD TV production lines as part of 'Project C', which involves a gradual shift to OLED TV mass production, according to a report by The Elec. It is expected to shut down its entire LCD TV production in South Korea. When Samsung shuts down its remaining lines in South Korean, it will no longer be producing LCD TV panels in its home country. Instead it can source panels for its "QLED" LCD TVs and conventional LCD TVs from its own production lines in China as well as CSoT's (TCL) new 11G LCD plant that began mass production earlier this year, where it has reserved a 10% share of panels.

On the day that Samsung halted its T8-1 line, regulatory filings revealed that equipment maker ICD had signed a contract with Canon Tokki. Reports claim that Samsung has seen sales of "QLED" LCD TVs increase over the last year, but it is mostly a diversion. As we previously reported, Samsung expanding the QLED to cover smaller and more affordable 43 and 49-inch TVs in its Q6 mid-range series, essentially recategorizing sales. Samsung still has a good grip on the 70-inch and larger segment, according to sales data from IHS Markit. However, the popularity of OLED TVs is pushing premium LCD TVs upwards in size - not unlike what happened with plasma TVs.

The following table shows the problem that Samsung Display is facing. The total capacity of TV brands in 2019 is 281m and the total capacity of the panel makers is 289.5, a reasonable situation. But global sales are expected to be 255m, resulting in an oversupply of panels of 113%. Panel makers want to keep this factor between 5% and 10% to maintain equilibrium. In the short term, TV panel prices have been under pressure, because of the excess capacity. But the future looks worse. Historically, TV shipments grow at 1% to 2% per annum, unless there is some technology breakthrough such as color in the 60s and flat panels in the 90s. There are no spectacular technology breakthroughs on the horizon, so the standard growth is expected.
​Table 1: 2019 TV Shipment and Panel Forecast

Source: Mizuho, OLED-A
​Capacity is growing much faster than demand as shown in the next table. With the addition of Gen 8.5, Gen 10.5/Gen 11 fabs for LCDs and OLEDs, supply is expected to grow by 60m through 2022, while demand grows by ~10m TVs, leaving an excess capacity of 31%. Samsung strategy of closing its Gen 8.5 LCD fabs likely recognized the long-term disaster of the capacity growth and reacted with a plan to close its LCD fabs and concentrate on the QD/OLED approach. If the pilot line is successful and demand is proportionate, Samsung would add a production level Gen 8.5 in 2021 and a Gen 10.5 in 2022. Total TV panel capacity would drop by 30m panels and the excess would fall to 20%. If LCD chooses to follow Samsung, it would reduce the total capacity by 40m panels and put the industry into equilibrium with a 5% over supply.
​Table 2: Planned TV Panel Capacity Increases

Source: Mizuho, OLED-A
​
The QD/OLED project has been described previously but it involves using an open mask/in-line system to deposit three layers of blue fluorescent material plus the associated common layers on an IGZO glass backplane. The OLED would also be encapsulate using TFE, likely the Applied/Kateeva arrangement. Red and green QDs would be inject printed using the Kateeva tool. The blue color would pass through a colorless material. In addition, the architecture will have to include a mechanism to account for blue photons that are not ​converted to red or green. Reports indicate that this might be anywhere from 5% to 15% of all photons. One solution would be to put a color filter on top of the polarizer. Reports that this manufacturing process would be less expensive that LG’s RGBW solution seem ill founded. WE have also reported that Samsung’s IGZO process uses 11 to 12 masks compared to LG’s 9 mask approach. The figure below describes the QDs as color filters, but they are really color converters and operate similar to the films used with LCDs. 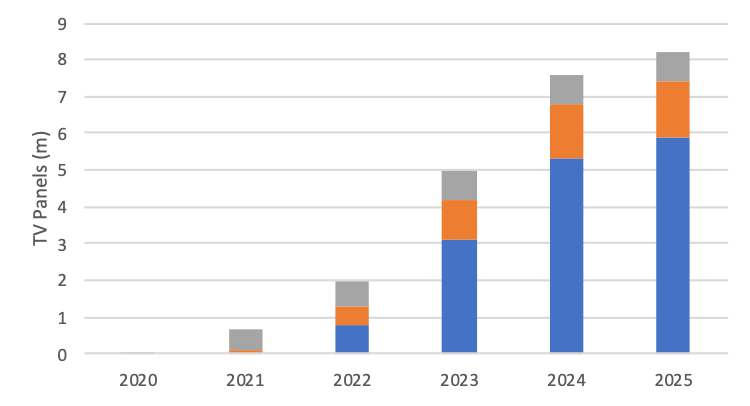