Vertical Divider
Moreover, the trends indicate that SEC will continue to lose share overall in mobile, displays and TVs and gain in Semiconductor, where it is reportedly investing over $21b in capex in 2019, while cutting back in displays. SEC has shifted it strategy in TVs and is betting heavily on larger TVs, 55” and above, but is also repositioning its strategy away from LCDs and moving to a combination of OLEDs and QDs. However, the company lacks plans for Gen 10.5 fab, which is necessary to compete for the next generation of large TVs, 65” and 75”.  In smartphones, SEC is moving in the opposite direction by endorsing the Chinese strategy of delivering products targeting the needs of the local population, in terms of features and prices. 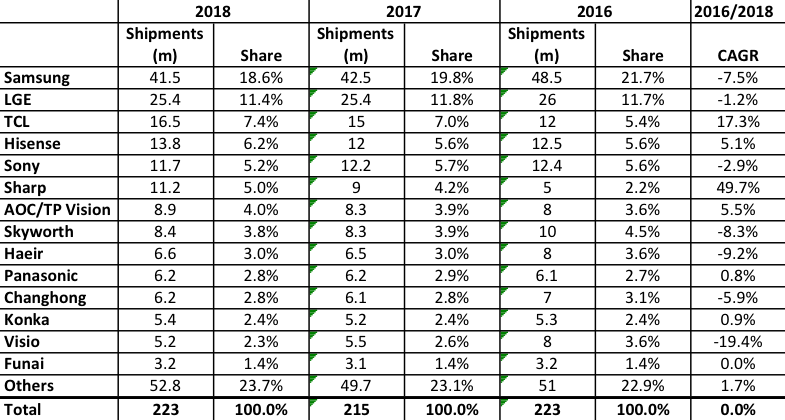 Looking in more detail at the 5 main business segments:

Source: Khaveen Jeyaratnam
​The mobile technology has been Samsung's biggest driver. However, that business segment has decreased by 25.3% since Q1 of 2014. All other business segments have posted positive growth in the same period with the largest growth coming from the semiconductor segment with 156.8%. The gap in revenue between the two largest segments has been narrowing and finally equalized in Q3 2018 with mobile technology at $21.81 trillion KRW and semiconductor at $21.70 trillionKRW. By separating the mobile technology segment even further into information technology ($0.81 trillion) and mobile communications ($21.0 trillion), Samsung semiconductor chip revenue is greater than their smartphone revenue. The sales decline of mobile devices is due to fierce competition in the market. Although the company has maintained its position as the largest player in the industry with 30.07% of market share, their closest revenue competitor, Apple has been steadily increasing their piece of the pie by targeting high-end consumers with their pricier products. On the other end of the market, Chinese competitors Oppo, Xiaomi, Huawei, and Vivoare gaining market share by targeting the more cost-sensitive buyers in the lower end of the market. The 4 Chinese manufacturers have a combined one-third of the global market share. Samsung's semiconductor business growth has been driven by demand from multiple industries (data centers, AR/VR, memory/graphic cards, smart appliances). Samsung has three separate business units within the semiconductor segment: memory chips, system LSI and foundry. They are the leaders in both NAND and DRAM chip sales. In DRAM they have a 46.58% market share, and a 36.4% market share for NAND. From the revenue alone, it is not evident of Samsung's strategic shift in business. However, this becomes glaringly clear when analyzing the breakdown of the company's operating income. 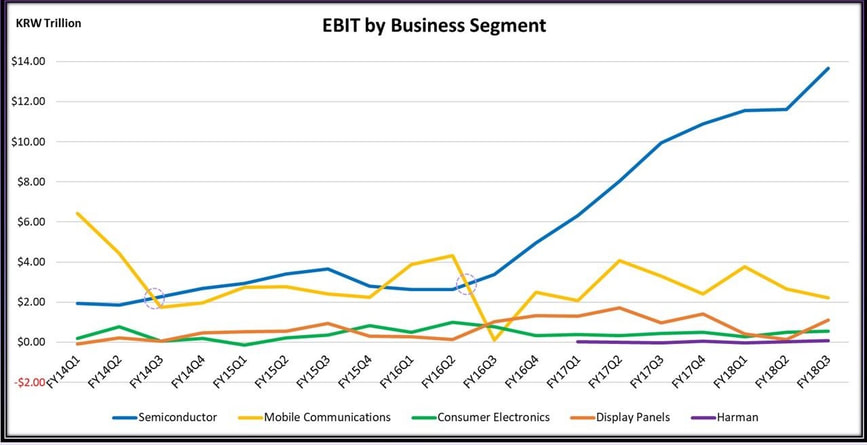 The reason for the large discrepancies between revenue and EBIT for Samsung's different business segments is due to different profitability margins. Although Samsung outperform their peers in all the industries they operate in, the semiconductor industry is simply more profitable compared to other industries in general. The semiconductor industry average operating profit margin is 31.07%, while the smartphone industry average operating margin is -2%.

Business Outlook
Samsung's outlook for all their business segments was based on financial analysis, industry analysis, product development and management guidance.

Mobile Technology:Samsung has many product development features planned for their smartphones in 2019 such as bolstering camera and sensor features. The new phones will also come equipped with the newly acquired virtual assistant, Bixby. The company is also expected to roll out 5G phones and equipment in the US and South Korea, but this remains a small part of their entire mobile technology segment and is still in the early stages. Despite management guidance of increased sales in 2019, they will likely lose market share from the rapidly growing Chinese competitors. Smartphone sales should be flat to down in 2019, while income margins drop due to an increase in marketing expenses. 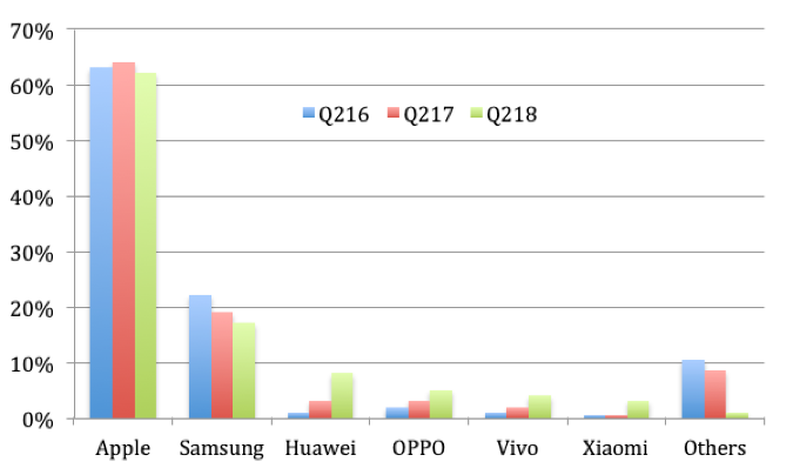 Semiconductor: This business segment is the most vertically integrated of all of Samsung's segments, which establishes a baseline demand for the products. Semiconductor chips are used in their network business of the mobile technology segment, and automotive electronics of Harman. Microprocessors are used in the consumer electronics segment and mobile devices. Both sales and operating income should continue to increase rapidlywithin this segment. This growth should be sustainable given that 5G and AI will create substantial demandfor semiconductor chips. Samsung are already taking steps to procure demand in this area with the company recently announcing $20 billion in capital expenditurein 5G and AI.


Consumer Electronics: Management stated company will focus on , but sales should decrease slightly in 2019 due to an economic slowdown, but earnings should remain the same with increased profitability from premium products.

Display Panels:Sales and earnings should increase slightlyin 2019 with LCD and OLED products used in Samsung's premium televisions and smartphones. The market interest in foldable displays should put Samsung Display in a strong position in the next few years, as they are currently the only game in town. 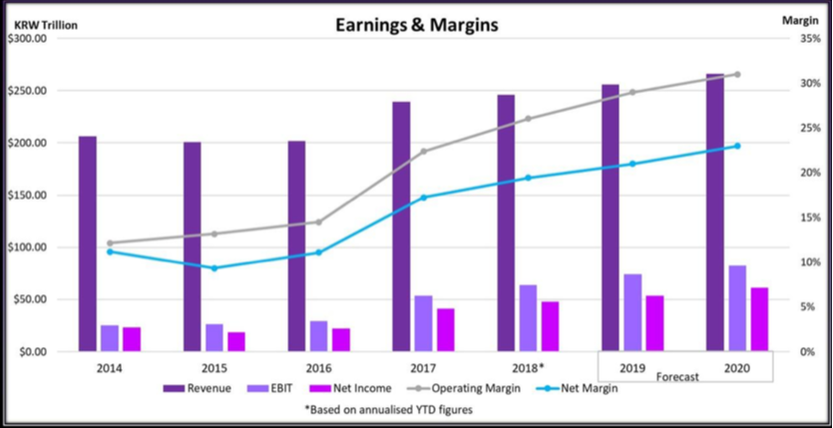 ​Even with conservative revenue growth, net income is projected to grow at a much higher rate at 12% in 2019 to $53.73 trillion, and 14% in 2020 to $61.20 trillion. This is due to an expansion in margins being contributed by the semiconductor segment.