Vertical Divider
Google is reportedly skipping India due to a spectrum licensing issue with the Motion Sense radar technology according to NDTV’s Gadgets360.  Per the report, the problem is that Motion Sense works on the 60GHz band of the spectrum, for which Google was apparently unable to get a license from the Indian government to use in the country.

Displays
The Pixel 4 XL has a 6.3 inch display that fills almost the entire front face of the phone from edge-to-edge with an aspect ratio of 19 : 9 = 2.11, which is 22% larger than the 16 : 9 = 1.78 on most Smartphones. The resolution is 3040x1440 with 537 pixels per inch. It uses Samsung’s Pentile Diamond Sub-Pixels and Sub-Pixel Rendering. The Pixel 4 XL has a selectable Smooth Display mode that provides a 90 Hz Refresh Rate for some content (which can increase display power). The Smooth Display feature automatically adjusts the Refresh Rate between 60 and 90 Hz for optimum viewing and battery use.

The 90 Hz Refresh Rate provides much smoother scrolling of screen content, and smoother videos and animation. The higher refresh rate also helps with touch latency and improves the responsiveness of the Pixel 4 XL. The higher Refresh Rate and the corresponding higher PMW Rate may reduce visual fatigue, eye strain, and headaches or eliminate this effect for some users that are affected by display flicker. The Pixel 4 XL supports the two most important Industry Standard Color Gamut’s: the sRGB / Rec.709 Color Gamut that is used for most current consumer content, and the new Wide DCI-P3 Color Gamut that is used in 4K Ultra HD TVs. The DCI-P3 Gamut is 26 percent larger than the sRGB / Rec.709 Gamut. But Automatic Color Management provides many more Gamuts.  The Pixel 4 XL has Automatic Color Management that automatically switches to the proper Color Gamut for any displayed image content within the Wide DCI-P3 Color Space that has an ICC Profile, so images automatically appear with the correct colors, neither over-saturated nor under-saturated. Automatic Color Management with multiple and varying Color

The Average Picture Level (APL) for on-screen image content is the Average Brightness (Luminance) over the entire screen, which varies from 0% for an all-Black screen, to 100% for an all-White screen at Peak Brightness. The Peak Brightness (Luminance) changes with the Average Picture Level APL of the on-screen image, with the Peak Brightness increasing by up to 50 percent or more between High APL and Low APL. This increasing High Brightness with Low APL effect can be very useful in improving screen readability in High Ambient Light, and also to highlight certain on-screen image content. But the resulting variations in display Brightness can distort the brightness relationships when viewing photos, in videos, and other images, so for High Accuracy the Luminance variation with APL should be as small as possible. On the Pixel 4 XL the Luminance variation with picture content APL is a Record Low of 0.5 to 1 percent. But as we discuss next, the actual reason for doing this is to improve the Absolute Color Accuracy and Absolute Contrast Accuracy of the display. Peak brightness measured for white is 444 cd/m2 and 442-448 in high ambient light. Apparently, Google chose not to use the external light sensing support, which allows Samsung to drive the Galaxy S10 displays up to ~1,200 cd/m2 in bright ambient conditions. 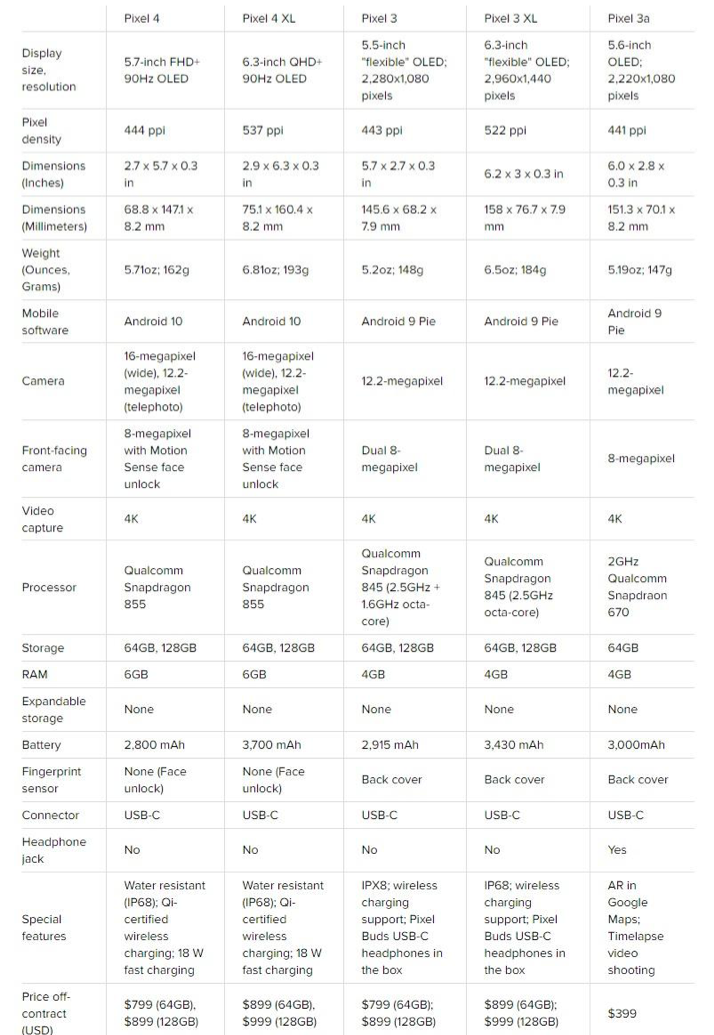 Source: Company
Cameras
The camera specs for the main lens include 12.2-megapixel, 1.4µm pixel width, dual pixel phase detection, OIS, ƒ/1.7 aperture, and a 77-degree field of view. The telelens specs are 16-megapixel, 1.0 µm pixel width, phase detection, OIS, ƒ/2.4 aperture, and a 52-degree field of view. The Night Sight contributes to better photos
at night and will even support some shots of the night sky. Both devices have a prominent square for a camera hump, with an LED light, microphone and two lenses. Video-wise, both cameras can shoot 1080p at 30, 60 or 120fps, 720p at 240fps and 4K at 30fps. The forward-facing lens, meanwhile, is an 8-megapixel unit with an f/2.0 aperture, 90-degree field of view and two NIR cameras for face unlocking. It will also shoot 1080p video at 30fps. The iPhone 11's camera was lauded when first released, and analysts have said Apple may have taken the camera mantle from Google. But, the Pixel 4 advanced face unlock feature is more advanced than Apple, which is still struggling to master the technology after nearly three iterations.

Security
Google custom developed a new security chip called the Titan M Security Module M for the Pixel 4. The Titan helps secure the OS and protects credentials and data within the phone apps.

Google coined the term “computational photography” since squeezing a 600mm f/4.5-5.6 zoom lens into a phone is impossible, but potent sensors, algorithms, and artificial intelligence make pics look professional. Computational photography’s been available for a while. Ever taken a panorama, used portrait mode, or enabled HDR. With the latest upgrades, phone cameras can take excellent pictures in the dark, zoom in farther, and color correct.  At their hardware events earlier this year, Apple and Samsung also rolled out serious software-based upgrades to their phone cameras and editing suites. The target market. Budding influencers on their quest for Instagram royalty.

Last week, we reported on a rumor that Google was going to reveal a 5G Pixel 4 at the Made by Google event. It seemed unlikely and it ended up not being true. Google’s VP of product design, Brian Rakowski, commented on 5G, “It will get there, but now is not the right time to buy a 5G phone. Both from a deployment perspective—the coverage is not broadly available in enough places for enough users to benefit from it—[and] from a hardware and phone perspective—it’s still power-hungry [and] immature.