Industrial designers, when exposed to OLED technology are free to explore structures  previously inconceivable with 2-dimensional displays. Foldable smartphones just scratch the surface of what a creative designer can do with the flexible OLED technology. New form factors are enabling vehicle, airplane, and consumer electronic designers to experiment with display constructs  that optimize space utilization, reduced power consumption, and integrate with the local environment with new design freedom that promises a revolution in system architectures. 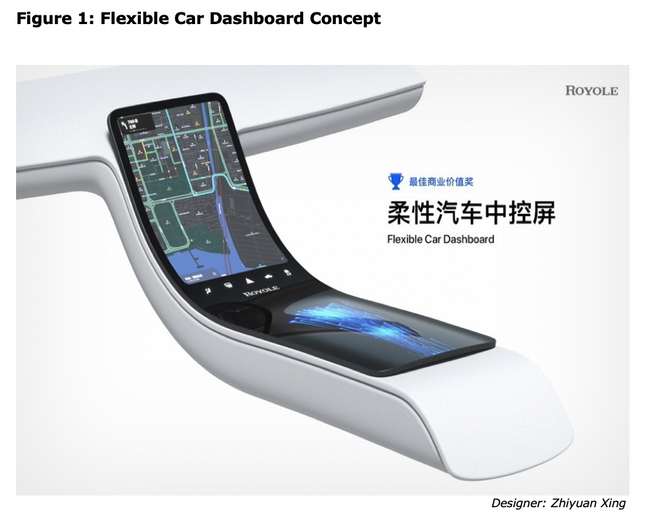 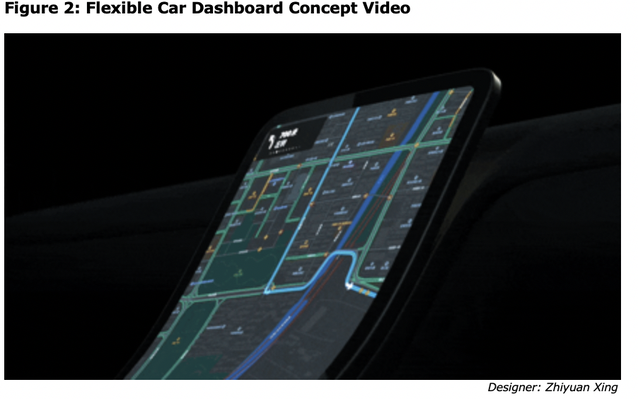 ​The panel is a long, vertical OLED display that folds open from the top and the bottom, revealing storage areas and charging spots. The display sits in place via magnetic closures allowing it to snap shut, and access the space underneath, as it unfolds like lifting the edge of a carpet. The upper part has a tray-style design, for storing a phone (even being able to wirelessly charge them or UV sanitize them), while the lower part is almost like a box to dump other items that are less likely to be used (charging cables, AirTag, earphones, power bank, etc.). This concept could even be extended to rear seat entertainment displays or a wall safe, anywhere space is at a premium. 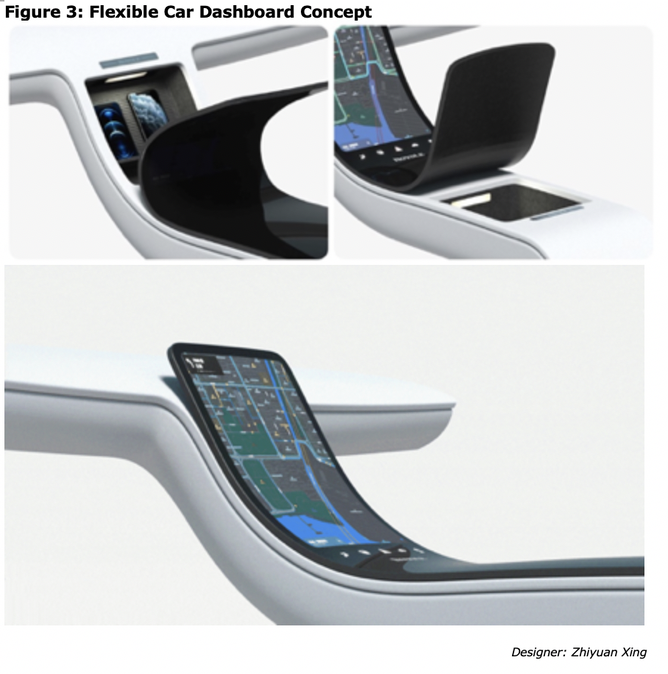 ​A crucial part of the display’s design is its lip, which is easily gripped and opened outwards. The display comes mounted on a thick layer of elastomer, giving it some resistance (to avoid damage by tugging it too hard), while a magnetic closure system allows the flap to satisfyingly snap shut. The display even knows when to switch off when it’s being bent, helping protect it against any accidental damage. It switches back on when shut, displaying the screen where it last left off.

​This concept is rather remarkable, and a fresh design direction from Royole, which hasn’t really seen much success in their attempt to penetrate the folding phone industry. A flexible dashboard display isn’t a novelty, but instead it is a very interesting feature. The area where the Royole Flexible Car Dashboard would sit is purely functional – currently occupied by a radio, AC air vents (which could easily be relocated), and perhaps a slot for a car charger. The Flexible Car Dashboard could be integrated into smart-cars or semi-autonomous cars, providing a large sprawling screen ideal for accessing the car’s smart features like the Map, Music Player, or other in-car controls. Fold it over it becomes storage too! 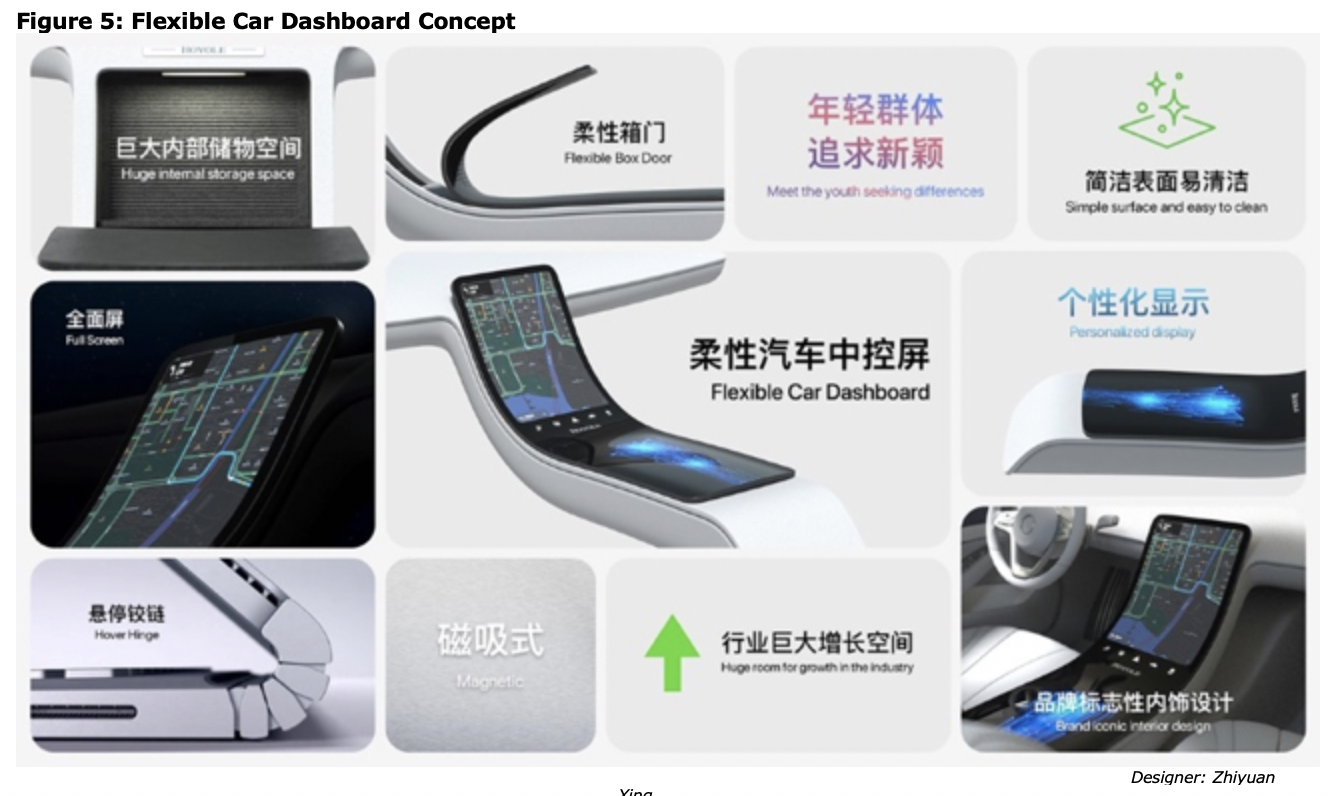 Shifting to aviation, Boeing and Airbus are experimenting with groundbreaking large-format OLED displays which will disrupt the cabin industry with more intuitive, immersive, and beautiful cabin designs. Simulations have shown by eliminating the break in the fuselage for the windows, improves the aerodynamics of a plane. The challenge is to provide the passenger with a comparable view of the outside world, a type of augmented reality for the airline industry.  Rosen Aviation has come up with the Maverick cabin concept embraces technology at the forefront of its design. Shortlisted for a Crystal Cabin Award this year:
--“Rosen aims to shift the travel paradigm by creating a cabin so rich in technology it completely redefines the passenger experience.”

The concept utilizes the latest in sensor and display technology to create a cabin that feels like something out of a science fiction movie. Familiar high-end touches like wireless charging and touchscreen control surfaces are accompanied by less common components, such as the huge OLED

​Seat controls are integrated into smart surfaces in the armrest. Buttons, known as ‘smart sensors,’ were developed by Rosen Aviation. The Maverick cabin uses integrated surfaces with backlit control indicators to  replace bulky mechanical switches. Working through microperforated substrates, the controls are proximity activated and provide haptic feedback to the user. Taking things, a step further, Rosen is also developing fully holographic keyboards for working in the cabin. Menus will also be holographic, minimizing touchpoints and reducing the potential for contamination of surfaces. The company has further talked of the integration of AI into the sensors, so that these smart surfaces can begin to predict a user’s intention. Large virtual windows and skylights, coupled with the olive wood veneer, give the cabin a light, modern ambiance.  The cabin is essentially windowless, which has the potential to make for a somewhat claustrophobic experience. However, Rosen overcomes this with the use of OLED displays to create virtual windows instead. These displays show a real-time image of the outside world, or can be used for business presentations, flight information, or even inflight entertainment.

​Speaking to Simple Flying earlier this year, Rosen’s SVP Strategy, Lee Clark, and VP Product Engineering, Darrell Finneman, noted the benefits that OLEDs bring, saying,
Photo: Rosen Aviation
-- “Of the many advantages offered by OLEDs, are the endless opportunities for transparency and flexibility. With these new features, virtual windows and skylights are made possible in several different form factors, whether it be a flexible display tied to outside cameras, or a transparent display providing key flight information juxtaposed to traditional windows.”

The executives also noted the potential for augmented reality to be integrated into these alternative windows. Things like a star map, pointing out the nighttime constellations as they pass by the window, or an interactive feed displaying interesting features on the ground below – it’s a moving map concept like no other that has gone before. 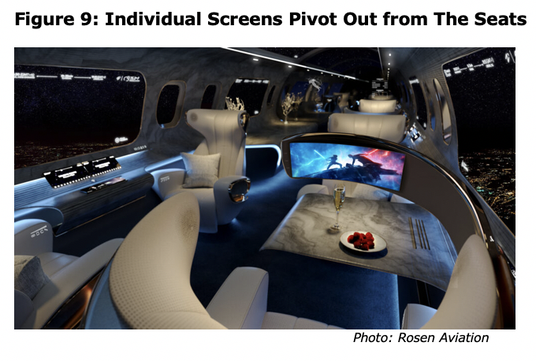 ​As well as the large displays on the cabin walls, the Maverick features personal pivoting seat displays, so that every passenger can enjoy their choice of entertainment onboard. In February, supersonic aircraft company Aerion announced that it would be working with Rosen for its cabin management and technology system (CTMS) for the forthcoming business jet AS2. The AS2 was to be the first supersonic business jet the world has ever seen, and with Rosen’s blue sky thinking behind it, we were looking forward to some delightful touches in the cabin. 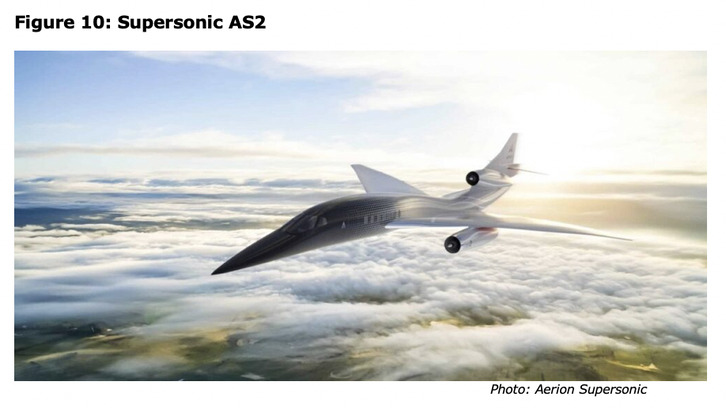 The AS2 may never become a reality; with Aerion now largely shut down, the future of this collaboration is in doubt. Nevertheless, that doesn’t mean it’s the end of the Maverick concept. Rosen’s executives previously outlined their goals for the future, saying;

--“Our plans going forward are to continue development of the many technologies demonstrated in The Maverick cabin. That is what made Maverick so exciting. It was not merely CGI smoke and mirrors but represented actual Rosen development projects. Seeing the video is one thing, getting to see and feel working proof-of-concepts takes the experience to a whole new level.”

The concepts that Rosen has woven into the Maverick cabin design. Many of the touchless, technology-led elements are even more relevant in our current, hygiene-focused environment. Perhaps this is indeed the future of business jet cabins. The Maverick cabin concept has been shortlisted for 2021’s Crystal Cabin Awards. Winners will be announced at the virtual Aircraft Interiors Expo (14 – 16 September 2021). Many of these ideas were demonstrated by Boeing in one of their concept aircraft, which we have been reporting on for the last two years. These concepts are being applied in products that have been around for 50 years, consider: 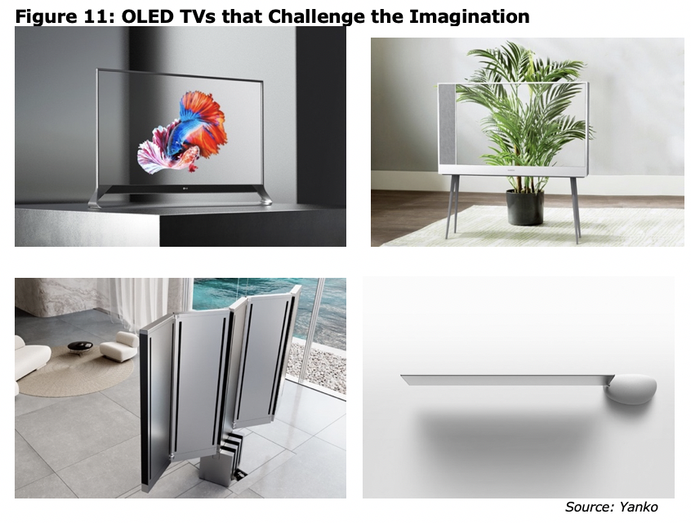 ​LG is even taking its groundbreaking OLED-R to a new level with a TV that unfolds horizontally.