Vertical Divider
​Musing in Shanghai at the International OLED Summit

​LCD TVs & Raising the Contrast Ratio
January 20, 2020
​
The challenge for high end LCD TVs to compete with OLED TVs has come down to increasing the contrast ratio and the preferred solution is some form of local10 zones dimming, which today varies from 10 zones for edge lighting to 100-500 zones for FALD to 1,000 zones for Mini LEDs to 2m zones for dual cell devices. As would be expected the contrast ratio increases almost linearly with the # of zones. Like any sub-optimized solution (a single emitter/subpixel), there are some downsides. For local dimming it happens in two categories:
Figure 1: Contrast Ration vs. # of Local Dimming Area

Source: Samsung
​
​In designing OLED display dopant material, there is always a tradeoff between efficacy, lifetime and color gamut. As a result, the chemical engineers are tasked to meet a certain color gamut with the lowest power consumption and longest lifetime. TVs require the longest lifetime, so often color gamut and efficacy is sacrificed, for smartphones, efficacy is most important. While there are many different color gamut standards, today 95% of DCI is expected, but in the future the industry is moving to REC 2020. 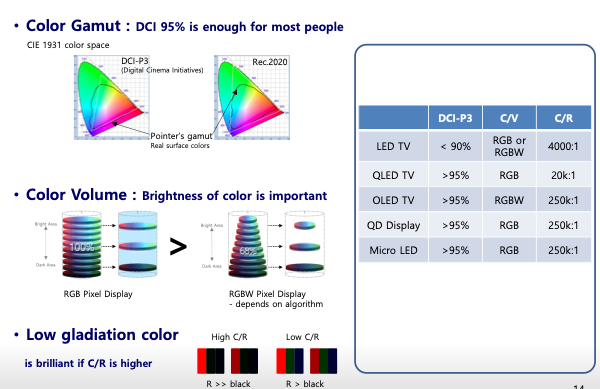