Samsung Mgmt. Takes a Hard Look at Its Mobile Division

Yet there are doubters in Samsung’s Management for these three divisions. One of the obvious problems could be shaped by the acting Chairman’s new culture.  Each business entity is encouraged to be standalone businesses and often compete on transfer pricing, which has led Mobile to buy OLED panels from the Chinese panel makers, when SDC’s capacity was under-utilized. SDC sold to Mobile’s competitors, offering their best display technology, including foldables, which could reduce Samsung Mobile’s very profitable Z Fold and Z Flip share in the near future. In 2021, Apple is expected to buy more OLED displays than Samsung Mobile. Samsung Visual initially turned down SDC’s QD-OLED technology, likely delaying its introduction by one year but forced to accede to SDC’s demands to secure a steady supply of LCD TV panels. This does not encourage cooperation, especially in an industry so dependent on technological change and fast response. 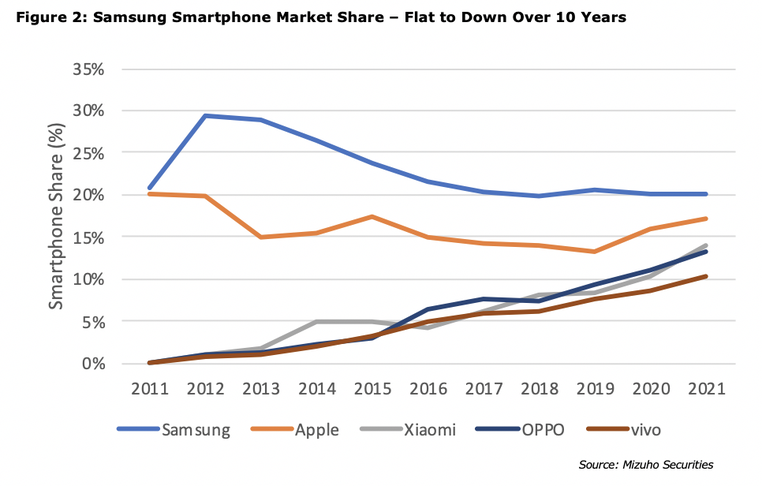 ​
We reported in June that SDC was considering investing $2B to repurpose one of its Gen 8.5 LCD fabs for the OLED IT market. The active matrix process, which was a-SI will be converted to IGZO and the deposition process will use a new tool made by Ulvac rather than Tokki. The big difference is that the substrate will be processed vertically along with the FMM. SDC supported Ulvac’s R&D to develop the tool and it is currently in the qualification process. The tool does not come cheap as Ulvac estimates it will cost between $300M and $350m and SDC needs 2 for each 15,000 substrate/month capacity.  While Samsung does not have any firm orders from Apple, there have been reports that Apple could be ordering 100m displays for iPads, MacBooks and monitors and Samsung Visual will buy 10m OLEDs for IT products in 2022 and at least 15m in 2022. A Gen 8.5 fab with 30,000 could produce 20m 15.4” panels at 80% yield.

Given that the Gen 8.5 substrate is being processed vertically, and will not be cut, the fab could also be used to produce top-emission, side-by-side TV panels. The Gen 6 horizontal process uses 20 masks for smartphones and the number required for Gen 8.5 has not been provided. A top-emission side-by-side OLED TV panel would be very competitive in the OLED market and perhaps change the long term direction of Samsung’s QD-OLED investment and even the way LG produces TV panels. At present, SDC is just considering TV panels for the Gen 8.5, if there is capacity not being used for IT panels. In 2013, Samsung experimented with the smartphone format for Gen 6 panels with TV size panels on a pilot Gen 8.5.  They used LTPS and cut the substrate into 6 pieces before the deposition step.  The yields were fine but the cost of LTPS and 6 deposition processes was judged to be too high, and the project was ended. In the new approach, the Gen 8.5 substrate is being cut in half, which could produce 3 55” panels on each half or an MMG configuration for panels 65” and above.

The new approach is both good news and bad news for Universal Display. On a positive note, making large panels with a side-by-side format will create more demand for phosphorescent material. On the negative side, it is likely an end to UDC’s foray into OVJP, since OVJP was designed to foster the use of phosphorescent material in large OLED panels, which is accomplished by SDC’s new approach. It eliminates the rational for OVJP and will likely be in production years before OVJP is ready.