Vertical Divider
That will be still up 11 percent from a year ago, helped by efficiency improvements and cost-cutting in the chip business, which accounts for nearly four-fifths of Samsung’s operating profit.The downbeat forecast added to investor jitters over waning global demand for mobile and other electronics devices that roiled world stock markets this month. The company said it expected quarter-on-quarter earnings decline in the fourth quarter due to weak demand for memory chips and higher smartphone marketing spend during the year-end holiday season. 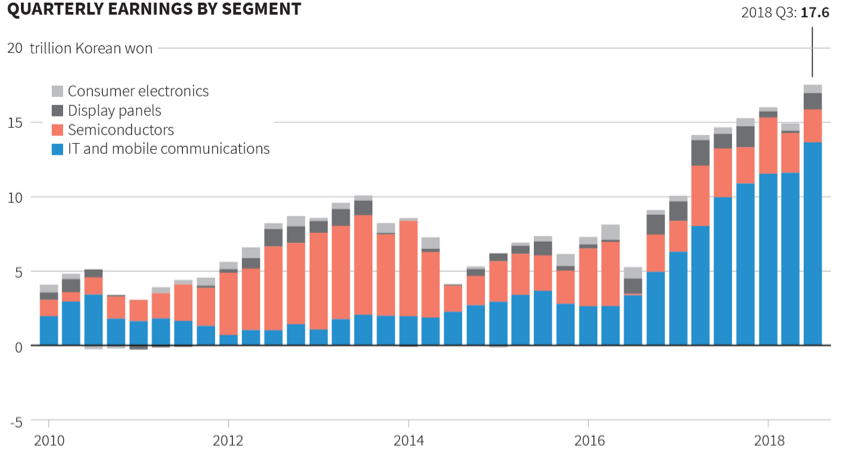 Source: Samsung Electronics
​“Looking further ahead to 2019, earnings are forecast to be weak for the first quarter due to seasonality, but then strengthen as business conditions, particularly in the memory market, improve,” Samsung said in a statement.  The capex cut should ease concerns over further supply growth and price declines, as prices of some memory chips have already fallen to over two-year lows and rivals are set to start new production lines next year. Samsung, one of the industry’s biggest buyers of chip-manufacturing tools, said its capital spending this year would drop by 27 percent to 31.8 trillion won ($28 billion) from a record 43.4 trillion won last year. Samsung, however, sought to assuage investor concerns of a steep downturn in the chip market, citing solid demand from servers as cloud-based data services grow fast. A Samsung executive said the company believed it was at the “start of a virtuous up-cycle” in chip sales to the server industry. “Temporary price changes can repeat but fundamentally we have a very strong demand base for memory,” Chun Sewon, senior vice president of Samsung’s memory marketing, told analysts.

Expansion
Focus on premium panels, but harder to differentiate


While questions concerning the prospects for Samsung’s semiconductor business were an obvious focus on the call, the general tone for display was moderate, with a positive bias toward OLED and negative/even for LCD, as would be expected.  Samsung, along with almost all other panel producers, TV set manufacturer, and mobile device brands, are focused on the high-end/premium segments of each of these businesses, which is the issue going forward.  Without a technology leap, there is little to differentiate products from one another next year, and while the headlines will be on a foldable device and 8K TVs, they will present relatively small volumes when compared to Samsung’s broad product offerings.

In the TV space, expect further expansion of QLED in 2019, with a secondary focus on the development of mini-LED by Samsung Visual in 2019.  As to the QD/OLED hybrid, the company remains mute, but reports indicate the pilot line to be operating in Q419.