​Reports of the iPhone 9, also known as the iPhone SE 2, have percolated to a boil. Apple was expected to announce the follow up to the iPhone SE at an event in March,  which didn't take place because of the coronavirus pandemic. (Instead, on March 18 the company announced updates to the iPad Pro, MacBook Air and Mac Mini.) This led to uncertainty about the future of the iPhone 9. In 2016, the original iPhone SE (based on the body of the iPhone 5/5S) was a huge success due in part to its $399 starting price. It was largely considered Apple's first "budget" iPhone. Small phone lovers flocked to it because of its petite size and then mourned when Apple stopped selling it in 2018.  By today's phone standards, the SE is absolutely tiny. Rumors indicate that the iPhone 9 will likely have a body around the size of the iPhone 8, which is smaller than the iPhone 11 Pro (the smallest phone in Apple's current generation). But when compared to the iPhone SE, the 8 is large.

Figure 1: iPhone SE and the iPhone 8. 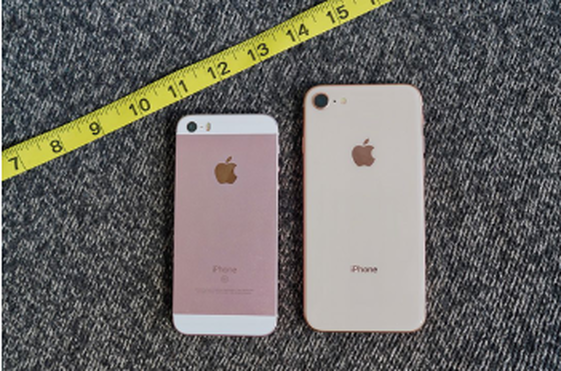 Source: Patrick Holland/CNET
​
People wanting a small iPhone have commented:
​
The iPhone SE has the same body as the iPhone 5 and 5S and those phones were built to be used one-handed. With their 4-inch displays, your thumb could reach pretty much every part of the screen easily, and that's what I want in the iPhone 9.
When it launched the iPhone 6 and 6 Plus in 2014, Apple employed a new feature called Reachability as a workaround for reaching the top of the new larger screens. To use Reachability, you double-tapped the home button which lowered the top part of what was on the screen to the middle. It made it easy to reach things one-handed. But the downside was you had to toggle the mode on and off, which added extra steps to anything you want to do on your phone one-handed. Initially using Reachability on an iPhone X was an exercise in frustration. From: Jason Cipriani/CNET