Vertical Divider
​Galaxy A Series, Trend Setter in mid-Range Smartphones
July 15, 2019
​
Samsung revitalized its Galaxy A series for the generation that prefers to stay live all the time. After recently announcing its plans to merge the Galaxy J series with the Galaxy A lineup, Samsung announced a new smartphone which sits at the top of this revamped lineup. The Galaxy A80 uses a new notchless Infinity Display, which omits any cutouts for the selfie cameras and provides for an uninterrupted view. While we have been hearing about the notchless display for some time, Samsung’s intended mechanism for the selfie camera had remained a mystery until today’s event.

Figure 1: Multiple Images if Galaxy A 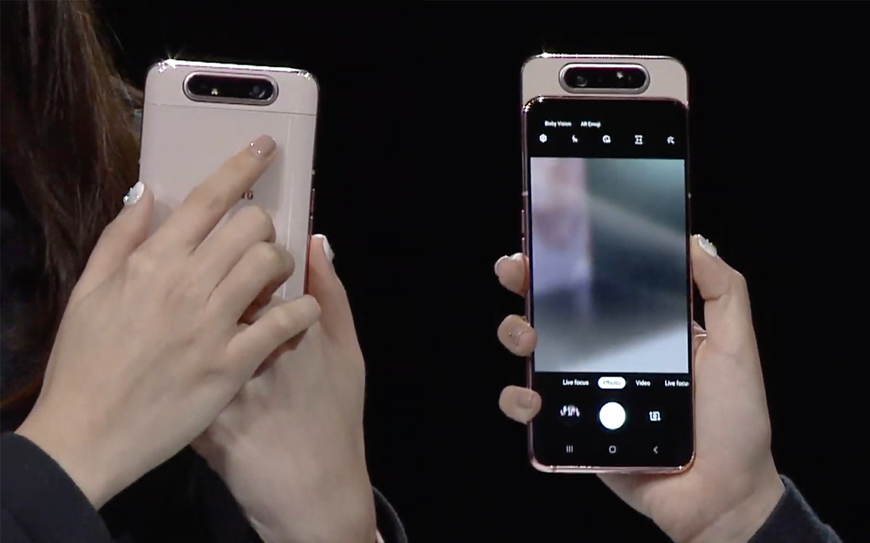 Source: Company
​
The Galaxy A80 uses a rotating camera setup, powered by a motorized mechanism which allows you to take selfies with the rear camera. The camera is similar to 2014’s OPPO N3 with a rotating camera, even though the swivel is much faster and smoother with the new Galaxy A80. This rotating camera frees up space, normally populated by the selfie camera and puts selfies on par with the pictures clicked with typical rear cameras. The Galaxy A80 features triple camera 48MP primary lens, an 8MP ultra-wide sensor for a wider view than what the human eye can see, and a 3D depth sensor for accurate bokeh effect as well as AR-based measurement applications. The Infinity Super AMOLED display measures 6.7 inches and supports  Full HD+. The display also sports an on-screen fingerprint scanner. Additionally, the upper half of the display also works as an earpiece calls can he heard without being conscious of where to place the ear.

The Galaxy A80 packs in a 3700mAh battery, backed by an “intelligent” algorithm that identifies usage patterns to reduce any wastage of power, which ensures that the battery lasts for a daylong of usage. But the battery can be replenished using the 25W fast charger.  The Galaxy A80 is the first smartphone to use the new Qualcomm Snapdragon 730G platform which is paired with 8GB of RAM.

Samsung also revisited the other Galaxy A series devices which it has either soft-launched or revealed only in specific markets in the past. From strictly budget-oriented Galaxy A10, to the youth-centric Galaxy A20, to the practical bundle Galaxy A30, to the performance-oriented entertainment devices like Galaxy A50, and the Galaxy A70, Samsung briefly iterated upon the qualities of each smartphone in the new and overhauled Galaxy A series. 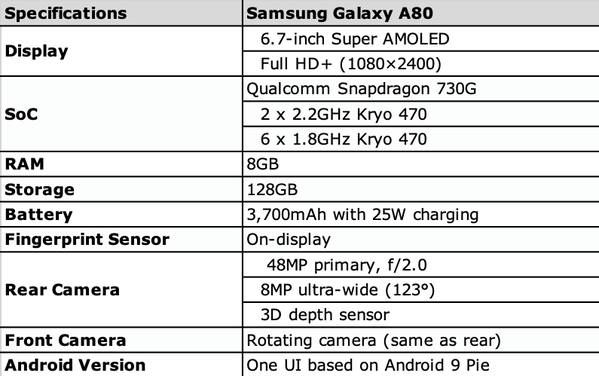 Source: Company
​
​Figure 2: Multiple Views of the Galaxy A80 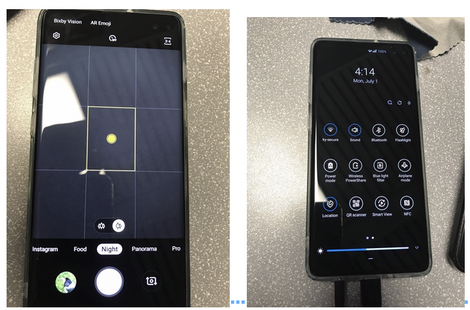 Source: Company
​
​Samsung's Galaxy Note has been used to add productivity features and tools to consumers and enterprise users alike, while also debuting new features and capabilities. Photos that reportedly show off the Note 10 reveal that there's a bigger Note 10 in the works, and it may be called the Note 10 Plus.