Smartphone OEMs are faced with the challenge of creating new demand to overcome consumer lethargy, resulting from an installed base of over 4b phones penetration (which in all likelihood exceeds 90% of North America, China, Europe, Japan and Korean population). The average hold time is now 4 years due in part to rising prices. But the industry could be on the cusp of a major growth spurt.  What high end consumers want is a large display to watch videos, a smaller display to conduct normal business, a thin form factor so the phone fits easily in a pocket and an ASP between $750 and $900.  5G, fast processors and high performance cameras already exist. The work by Samsung and others in solving the technical challenges of foldable displays has been a powerful but expensive first step. The Z Fold 3 will meet most of the requirements of a next generation phone, VRR up to 120 Hz, 16MB under panel camera (UPC) under panel fingerprint sensor no notch, the S pen for productivity, thinner form factor due to the combination of color filter on encapsulation, black PDL, black matrix and elimination of the circular polarizer, a triple-lens rear camera, with 3x telephoto, wide-angle, and ultrawide angle lenses, a 6.2” exterior display and 7.6” interior display. However, it is expected to be as thick as the Z Fold 2 (13.8 mm and 16.8 mm) which is almost twice as thick as the Galaxy S Pro’s 8.8mm and carry a $1,999 initial price.

Other advances to finish out the product include:
The recent plethora of rollable prototypes could solve the thickness problem but will exacerbate the cost problem.  The cost of a flexible display is around $70. Increasing the size and making it foldable probably more than doubles the price to $150, adding the external flexible display adds another $70, bringing the display cost to $220 vs. $70 for a brick phone. Introducing the rollable approach only add costs, at least in the short term.  Samsung’s announcement at DisplayWeek indicates a rollable could be available as early as 2022, but a $1,000 price is still years away. Just compare the $68,000 price of LG’ 65” rollable OLED to its best 65” fixed TV, at $3000.

The potential of true wireless charging could have a form factor and cost reduction impact, if the battery size is reduced due to the eventual “always” available charging feature. 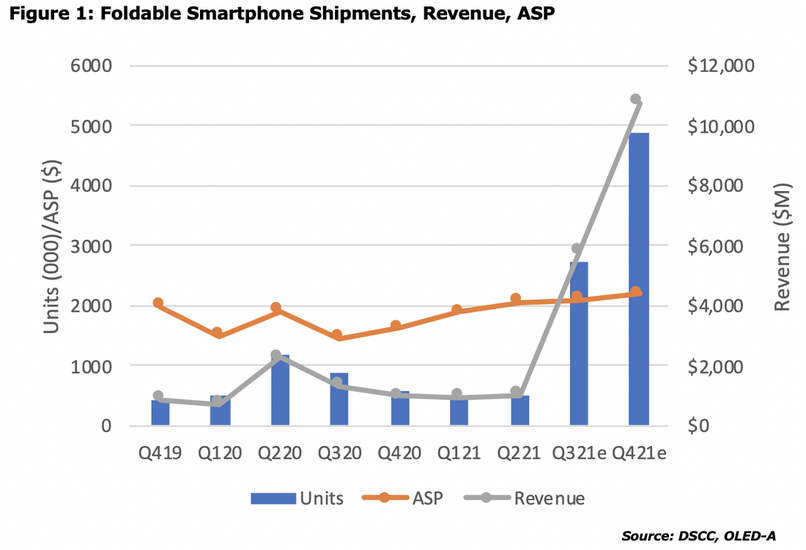