Vertical Divider
​5G Coverage Forecast to Reach 50% for 57% of Networks by 2023 and 100% for 68% of Networks by 2028
May 13 ,2019
​
Matthew Brennesholtzwrote about 5G for Display Daily and writing as an old fossil, he explained that 5G was not of personal interest because he was the last of a breed that used his mobile phone primarily for voice and networks don’t need faster performance for voice. He cites that data traffic has grown Y/Y from less than 50% to nearly 90% in some quarters. The next figure shows that there is no sign of the  trend abating as data traffic is expected to continue to grow compared to voice traffic.
Figure 1: Voice Traffic compared to Data Traffic on Mobile Networks 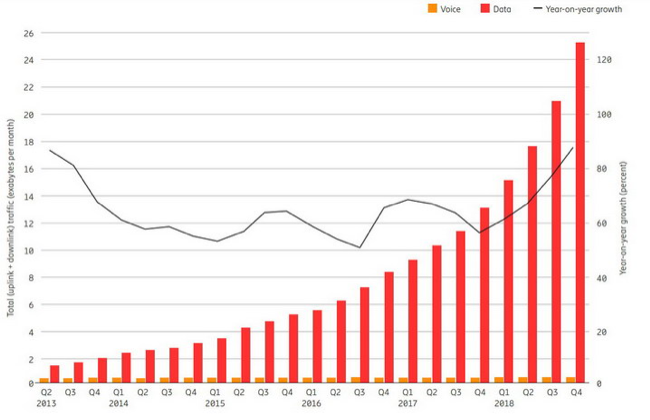 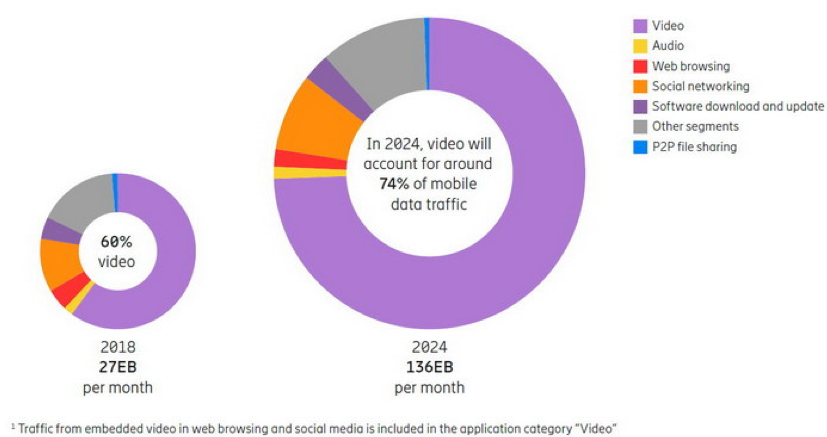 Source: Ericsson
​According to Ericsson, video represents 60% of the 27 Exabytes of data traffic per month today (1 Exabyte = 1 million Terabytes). By 2024, Ericson expects video to take a larger share, 74%, of a much larger pie, 136 Exabytes. All data traffic, including video, will grow at a 31% CAGR. Looking at just the video traffic, 16 Exabytes in 2018 is expected to grow to 101 Exabytes in 2024, for a CAGR of 36%. 5G networks are seen as a way to increase network capacity to meet this need for high resolution video and other applications.

Source: GSMA
​
​5G is all about increasing transmission speed and reducing latency. The following table shows the maximum speeds of each generation of cell network technology and the average speeds in the real world.

Source: Digital Trends, OLED-A
​
1Gbps (gigabits per second) is 1,000Mbps (megabits per second). Megabits are different from megabytes — there are 8 megabits (Mb) in a megabyte (MB). So, 1Gbps translates to 125MB per second. An MP3 file might be 5MB, while a TV episode might be 350MB, and a Blu-Ray movie will be 15GB (15,000MB) or more. If you actually have a 1Gbps connection, you could potentially download a Blu-Ray Full HD quality movie in two minutes. While 4G is still improving, it realistically provides between 10Mbps and 50Mbps. Netflix recommendations for streaming speeds, recommends 25Mbps for Ultra HD quality. 5Mbps is needed for HD. The aim with 5G is to hit 50Mbps as an average minimum. It’s always nice to have faster speeds, but that’s not really the big attraction with 5G because 4G speeds are already pretty good. What 4G is not good with is latency. Latency is the time it takes for data to be uploaded and reach its target. It measures the time it takes for data to go from source to destination in milliseconds (ms). It’s very important for applications like gaming, where response time can have an impact on the outcome. It could also prove vital for self-driving cars if data is being transmitted to the cloud, and quick decisions can trigger a reaction to brake or avoid an obstacle in real time. With 4G networks, the average latency is around 50ms, which could drop to 1ms with 5G technology. It takes at least 10ms for an image seen by the human eye to be processed by the brain. Low latency is vital for real-time reactions in machines or cars and it could also make cloud gaming possible.

In a GSMA survey of network operators, the new revenue will come from enterprise use of 5G, not consumer use, as shown in the figure above. The current version of 5G is carried by two different radio frequency bands. The one that gets all the hype about super-high download speeds is mmWave and is at radio frequencies greater than 28GHz. The second RF band is the sub-6GHz band or just sub-6. The original 5G specification included only the mmWave band. The more recent 5G NR specification includes both the sub-6 band and the mmWave band. The “NR” in 5G NR stands for “New Radio” but the sub-6 band, especially the region from 600MHz to 3.6GHz, has been in use for decades and is the RF region currently occupied by 4G and earlier cellular services.

Source: Qualcomm
​The mmWave band is very short range, some estimates claim that mini-cells will need to be spaced 100 – 150m apart to ensure 100% coverage. Telephone poles are spaced roughly 38m apart.  To ensure 100% coverage one phone pole out of three would need to have a mmWave transceiver on it. T-Mobile is planning on a nationwide 5G network in the 600MHz band. This band is the lowest frequency, longest range but lowest data carrying capacity of any US cellphone band.
Another problem with the mmWave band is it doesn’t penetrate: a tree blocking a mmWave transceiver, might not black a signal in the winter when there are no leaves on the tree but would likely block a signal when the tree have leaves, The mmWave band will provide no indoor coverage with outdoor cells. 5G has been proposed as a vehicle for the very high data rates needed for immersive, high resolution VR. To get these data rates, a VR headset would need to be used outside where a mmWave mini-cell sits on a telephone pole. mmWave will require a higher density of cell sites to provide good coverage. In a Qualcomm study, at 28kHz, 73 cell sites/km² are required to get 77% coverage or 130 sites/km² to get >95% coverage. At the far end of the mmWave band, 39GHz, the problem is worse with 93 and 165 sites/km² respectively.  With the sub-6 band of 5G NR, outdoor and indoor coverage is just as good as 4G or, for that matter, with the large installed base of 2G networks. Relatively few 3G networks were ever built, compared to 2G and 4G. 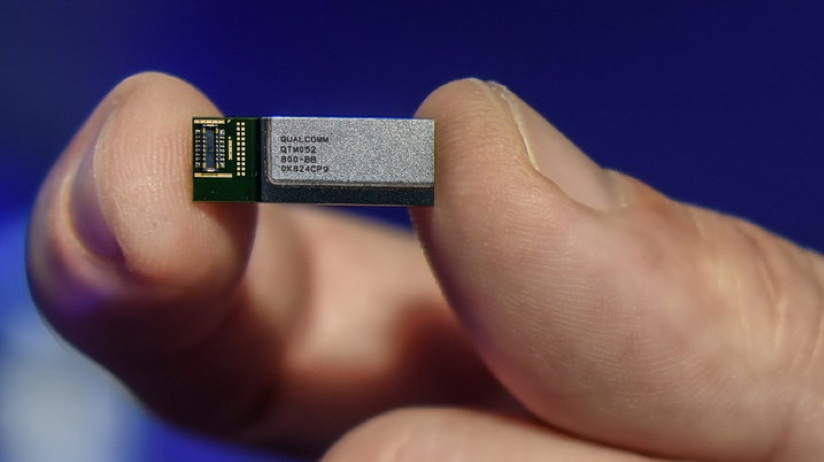 Source: Qualcomm
​5G on the sub-6 band improves on 4G by being able to transmit more data per unit bandwidth than most versions of 4G do, due to better, more efficient encoding. The OFDMA (Orthogonal Frequency-Division Multiple Access) RF modulation scheme used by 5G is also less sensitive to multi-path problems than the OFDM (Orthogonal Frequency-Division Multiplexing) RF modulation scheme used by 4G and LTE networks. This encoding improvement does not provide the 100x improvement that the 5G hype promises, but a more modest 1.5x – 4x, depending on the version of the 4G service it is compared to. The 100x improvement comes with mmWave. mmWave has its uses, but is fundamentally a poor choice for mobile communications, although modern beam-steering antennas and other technology fixes largely overcome these problems. There is no technology solution for its short range – the network operator will need to install a lot of cells.

Source: Verizon
​
​5G mmWave is best used for Fixed Wireless Access (FWA).  Much of this FWA will be business or government-related, not consumer-related. However, Verizon is testing 5G mmWave FWA in the consumer space as a high speed alternative to copper or even fiber to the home (Verizon’s FIOS). A 5G mmWave microcell on a telephone pole can provide high-speed network access to several nearby homes, providing Internet, TV and voice services over one wireless connection. On the outside the house, a mmWave transceiver is connected to a high-speed Wi-Fi system inside the house. With no wires or fiber cables for Verizon to install or maintain between the home and the pole, it provides a higher capacity system with even higher data rates than with fiber to the home. 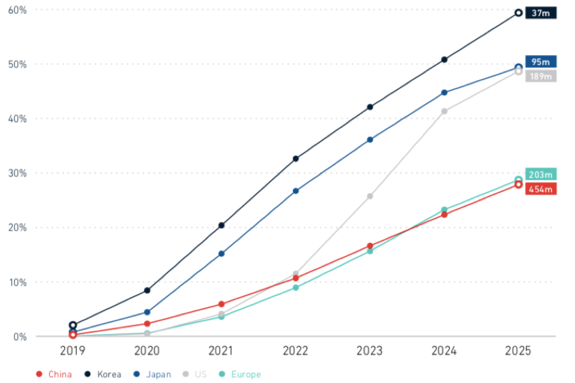 Source: GSM Association
Buy a 5G phone today and it will likely most use 4G, 3G or 2G network, unless the phone is kept until 2023-2025.
​From: Display Daily