The global smartphone market wholesale average selling price (ASP) increased 10% Y/Y in Q2 2020 even as the shipments declined the highest ever at 15.5% Y/Y. Overall, the smartphone industry revenue declined 15.0% Y/Y during the quarter. 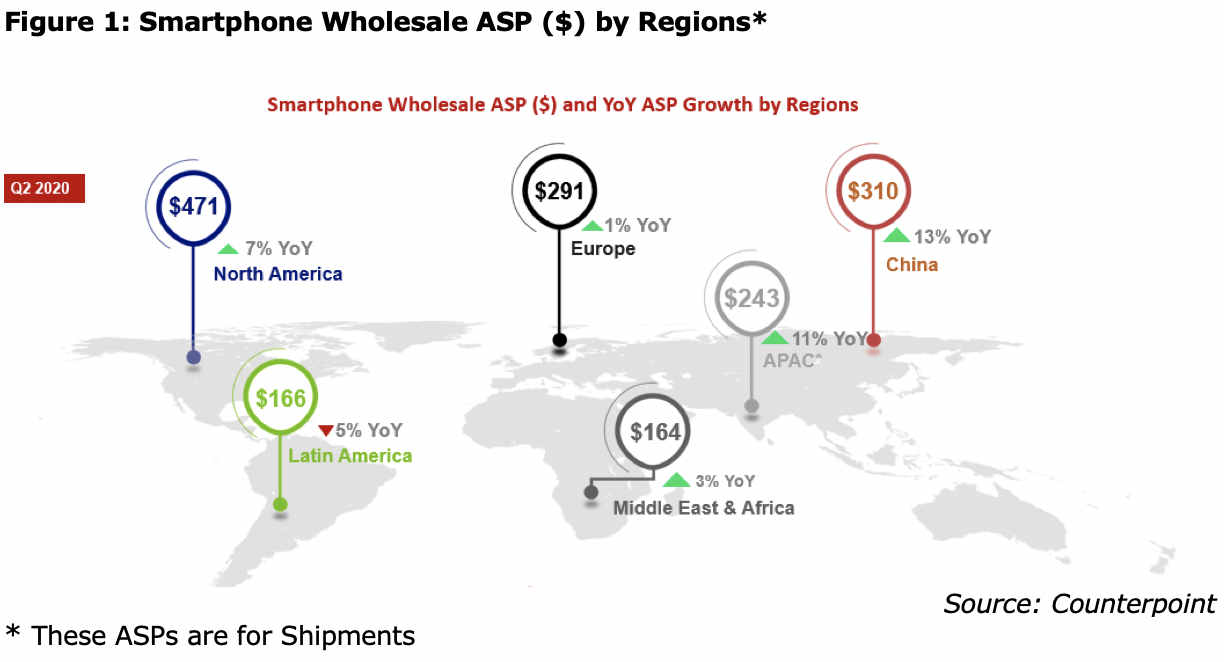 The ASPs for all the regions increased except Latin America. While the COVID-19 pandemic had its effect on the overall smartphone market, the premium segment was much resilient, declining at a modest 8% YoY during the quarter as compared to the highest ever global smartphone market decline. The economic impact of the pandemic on the potential user base of the premium segment was less when compared with other customer segments. This is also indicated by the demand for Apple, the largest player in the premium segment. While shipments for most of the OEMs declined in Q2 2020, shipments for Apple increased 3% Y/Y and iPhone revenues increased 2% Y/Y.  The uptick in 5G shipments also contributed to the growth of ASP. During the quarter, 5G contributed to 10% of the total global handset shipments but contributed to 20% of the total handset revenue since most of the 5G devices in Q220 were in the premium segment. China was the largest contributor to 5G sales. 72% of the global 5G handset revenue came from China. Most of this was driven by the push from Huawei. Overall, the smartphone ASP in China increased 12% Y/Y and the region contributed to over 34% of the global smartphone revenue, highest since 2016. This was also because while all the other major economies were still suffering from the severe impact of COVID-19, China was already on the path to recovery. The demand for lower price tier models was severely impacted. Entry-level devices are usually bought offline, and most of the global markets were in some stages of lockdown during Q2 2020. Consumer sentiment was also low, with users in the low-middle class avoiding discretionary purchases. Overall, the reduction in demand for lower price tier devices due to economic impact and offline retail closure, the resilience of the premium segment, and the uptick in 5G sales, especially in China, contributed to the rise of smartphone ASP during the quarter. From: Counterpoint
​ 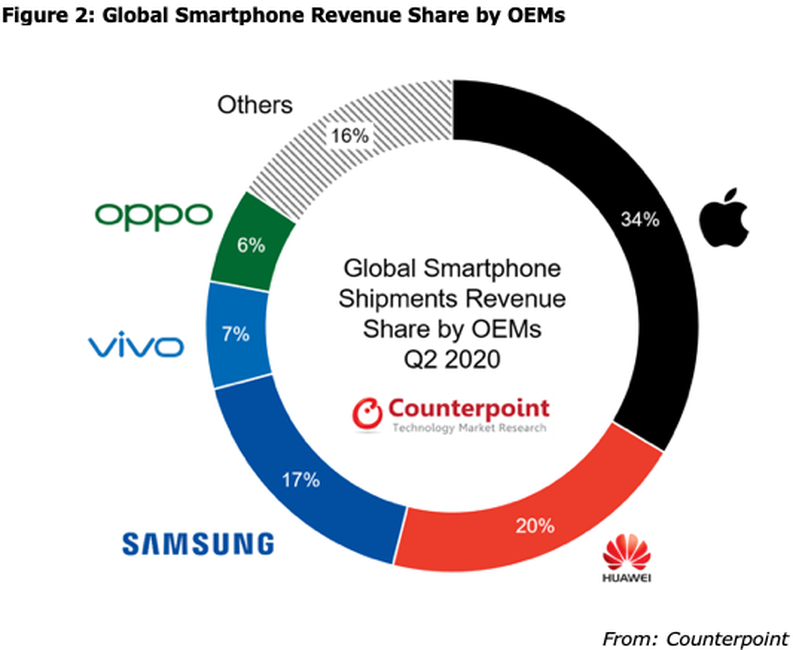 IDC had the opposite perspective emphasizing the downward pressure on smartphone prices with 73% of shipments in 2020 priced below US$400, and smartphone value declining 7.9% Y/Y in 2020 to US$422.4 billion, down from US$458.5 billion in 2019. The downward trend is intensified by consumers turning to devices priced in the low-to-mid range. Overall, the low-to-mid-range segment (US$100 to less than US$400) had a 60% market share in the second quarter of 2020 and is expected to grow to 63% by next year. The mid-to-high-range segment (US$400 to less than US$600) grew its share of the market by almost 4pp to 11.6% in the second quarter of 2020. Devices from Samsung, Huawei, and other Chinese vendors such as Xiaomi, OPPO, and vivo are the main vendors driving these segments. The pressure on prices is reflected worldwide, though it is most obvious in developing regions such as Asia Pacific (excluding Japan and China), Latin America, Middle East & Africa (MEA), and Central & Eastern Europe (CEE) where under US$400 devices captured up to 85% of the market in the second quarter of 2020, said IDC. In the US, devices under US$200 increased their share by 10pp on year to capture 27% of the market in the second quarter of 2020. In China, the mid-to-high-end segment (US$400-US$600) grew the most with an 8pp increase in market share to 21% in the second quarter of 2020. IDC expects the fastest growth will be in the US$400-600 price band as 5G sales grow and the average selling price (ASP) for 5G phones drops to US$465 in 2024." According to Strategy Analytics, foldable smartphone shipments will grow from under 1 million units last year to 100 million by 2025. These forecasts are 30% higher than display experts DSCC and Omdia.

Some of the factors that are holding back the foldables market are high pricing, low yields of bendable displays and concerns if the hinges or screens are durable as to last longer than several months, which will be addressed in the long term, Strategy Analytics said. On Thursday, Motorola, (owned by Lenovo) rolled out the wallet-sized Razr. With the premium 5G-powered foldable mobile phone, Motorola hopes to grab a slice of the foldables pie in the world's largest smartphone market.
Priced 12,499 yuan, ($1,842) the has a 2.7-inch OLED cover display, and a 6.2-inch OLED, foldable main display.

Shipments of flexible AMOLED panels used in smartphones are expected to reach 513 million units this year, up from 471 million units last year, according to Omdia.
​
Li Yaqin, president of Sigmaintell, a Beijing-based market research firm, said demand for flexible OLED panels used in foldable smartphones is estimated to surge 140 percent this year on the back of the commercial application of 5G technology.
"The penetration rate of OLED in the mobile market is expected to reach 50 percent by 2024," Li said, adding about 60 to 70 percent of sales revenue will be contributed by OLED by then.

Samsung has announced the commercialization of its third-generation foldable OLED panel that has the world’s smallest curvature, which means that the new OLED panel will leave less empty space when a foldable device is shut closed. It also means that the new OLED panel is less likely to attract foreign particles, thereby protecting the display. Measuring 7.6-inch, the new foldable OLED panel uses the Ultra-Thin Glass(UTG) and offers a resolution of 2208×1768 pixels. The new OLED panel has been certified for 200,000 display panel folds by Bureau Veritas and emits the lowest level of blue light at 6.5%. This is the display panel that you see in Samsung’s recently-announced Galaxy Z Fold 2; it’s also the first device to feature Samsung’s third-gen foldable OLED panel. “In an effort to minimize folding stress, Samsung Display has optimized a series of technologies related to the material of the display, the panel design and the module assembly, so that the multi-layered structure will function like a cushion when the panel is folded,” says Samsung Display.