As 5G smartphone prices are coming down rapidly, volume estimates are up. At the end of 2020, Realme offered the lowest price on a 5G smartphone with a retail price of around $150 in China. Heading into 2021, the range of 5G smartphones continues to broaden, and with Qualcomm launching 5G on its Snapdragon 400 series, retail prices of 5G capable smartphones should fall further, offset by IC shortages, which could cause prices to be more resilient than it might otherwise be.  The launch of the 5G capable iPhone 12 for $799 established a benchmark for the very high-end of the mid-range. Had Apple launched at $699 – where the iPhone 11 had the year before – it would likely have forced more compression in Android pricing, but the $100 buffer has given Android rivals some space to play a broader game with their portfolios.

The standout product of the three is the OPPO. It has a beautiful, graduated sky blue back made of textured glass that feels almost sandblasted. This blends smoothly into its shiny metal frame that, in turn, blends well into the curved glass of the display. The back is eye-catching and resists smudging from fingerprints. The cameras are contained in a distinctly designed array at the top left of the back. This is an on-trend position consistent with many products being launched in early 2021. 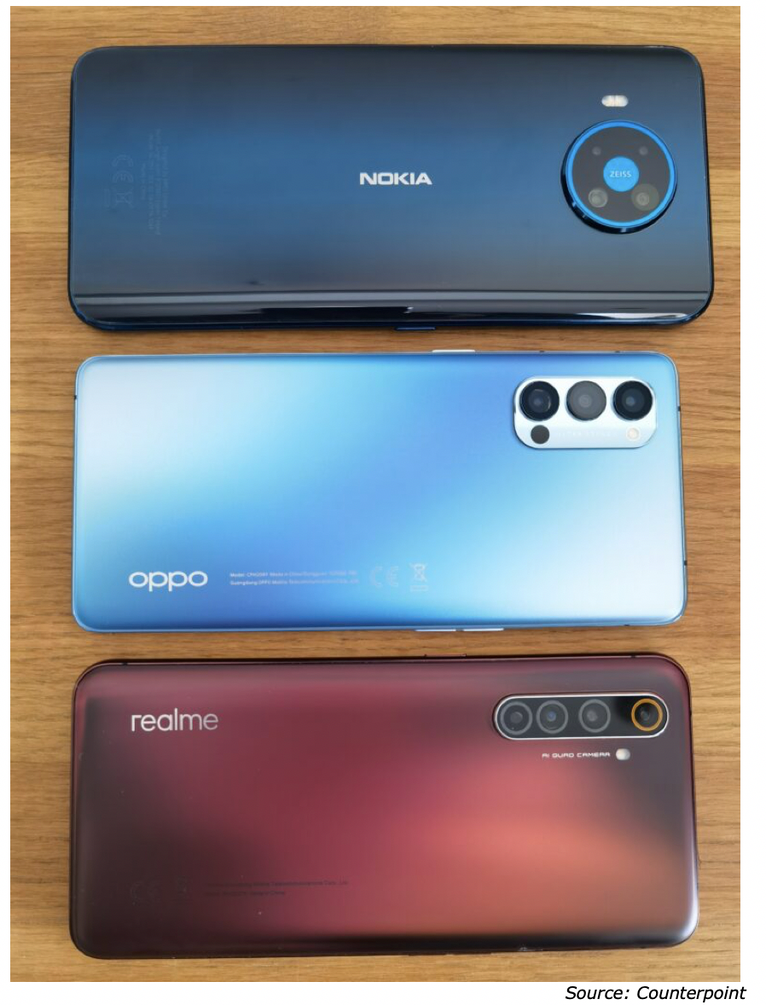 ​The Nokia is also good-looking. It too is a graduated blue but of a darker shade and made from shiny glass. While attractive, it is prone to showing fingerprints. It is also slippery and apt to slide-off even moderately sloping surfaces. The Nokia has a stainless-steel chassis that blends well with the back, but the display is not quite as seamlessly fitted to the sides as OPPO has managed. Close inspection shows a black, radiused frame sandwiched between the display glass and the sides of the Nokia. It is not obtrusive in any way but less slick than the OPPO. The camera system on the Nokia is a circular array in the top center of the back panel. This is reminiscent of the position that Huawei has used on its Mate series and a few other products. There’s nothing inherently wrong with it but could be regarded as off-trend relative to newer products, but it is distinctive.
​
The Realme, as with several aspects of these three products, sits somewhere in the middle, though in this case closer to the Nokia. Its back is also of glass with a matt finish, but it is somehow more prone to gathering fingerprints than the OPPO.

The OPPO and Realme both offer under-display fingerprint sensors (FPS) with simple facial recognition offered as well. The under-screen FPS works well on both phones. The Nokia’s FPS is integrated into the power button on the right-hand side, which also acts as the screen wake, lock button. The FPS works okay, though can sometimes be a little hesitant with unlocking. This also means a left-handed person will likely need to use their index finger to unlock the device. On the Nokia, the FPS button is a volume rocker. On the left-hand edge of the phone is a button whose sole purpose is to invoke the Google Assistant. This function can be disabled in Settings, but the button cannot be reassigned. Both the OPPO and Realme have the power/lock/wake button in the same place as the Nokia, but the volume rocker on the left-hand edge of the phone. None of these phones have any IPX rating, usually one of the first casualties of cost cutting.

Placed side-by-side, the Nokia is noticeably bigger than the other phones and features a 6.81-inch IPS LCD display, although, with the lowest screen-to-body ratio, its slightly bigger bezels don’t help. The Realme is the most compact thanks to its 6.44-inch AMOLED display, however it is quite heavy at 205g, but still over 20g lighter than the hefty Nokia. By comparison, the OPPO is startlingly light at just 172g, but it still packs a 6.55-inch AMOLED display. Part of the weight difference is in the battery. Looked at in isolation, the Nokia’s display is quite good. It’s big, bright and, at 1080p, offers good levels of detail. The viewing angles, though, are noticeably compromised and the backlight levels seem a little patchy. Nothing dramatic, but around the punch hole for the front camera, there is a slight shadow. Where the display on the Nokia is deficient though is the refresh rate. At 60Hz it is noticeably less smooth when scrolling compared to either of the other two, both of which offer 90Hz refresh rates on their AMOLED displays.

The Nokia’s 4500mAh battery is the largest of the three. The OPPO’s is the smallest at 4000mAh – which helps it achieve its slim profile and light weight. However, we were caught out a few times almost draining the battery in a day and this with relatively modest use. Nokia claims to offer fast charging, but it offers a relatively puny 18W charging capability, but we have confidence the Nokia will last a day, so may have a less urgent need for rapid charging. None offer wireless charging.