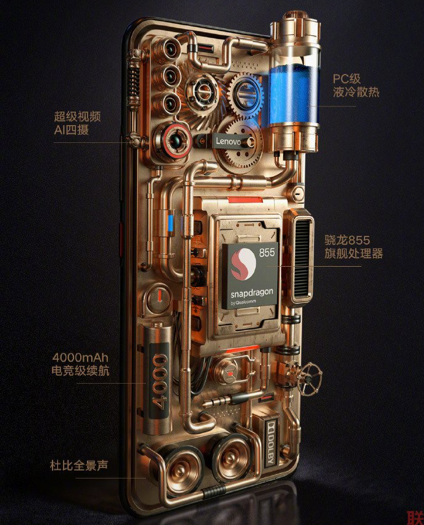 Source: Lenovo
The rendering exaggerates the phone’s depth and internals, showing everything from the Snapdragon 855, a 4,000mAh battery to big Dolby-powered speakers and a giant liquid chamber. While the real Z6 Pro will miniaturize these parts, the image and heat references reinforce early5G engineering concerns that chipmakers have more recently downplayed. China’s ZTE has confirmed via Weibo that it will be releasing the Axon 10 Pro on May 6, following a February preview of its first 5G device. Like Lenovo’s Z6 Pro, this Axon model will have a roughly 6.4-inch screen, a Snapdragon 855 processor, Dolby stereo support, and a 4,000mAh battery. There will be three rear cameras, but no Time of Flight depth sensor. The display will actually be a hint larger than Lenovo’s, while featuring in-screen fingerprint scanning and a 20-megapixel front camera. ZTE’s early May release date for Axon 10 Pro is apparently solely for China, which hasn’t officially launched commercial 5G networks, while global availability is expected to begin later in May or June. Lenovo promised to be early with the Z6 Pro, but it’s unclear whether the company’s April launch date will actually be accompanied by deliveries across the world.

LG’s optionally dual-screened V50 ThinQ was set to be the second 5G phone released in South Korea, but after touting the device’s 5G-AI features just 10 days ago, LG unexpectedly postponed the scheduled launch. Initial reports suggested that LG was consulting with Qualcomm regarding the V50’s Snapdragon-powered 5G capabilities, but LG subsequently said South Korean carriers advised it to wait until 5G networks were more stable. The advice followed complaints about Samsung’s Galaxy S10 5G network-switching performance and 5G availability that reached a critical mass soon after the device’s April 5 launch. LG hasn’t announced a revised South Korean release date for the V50, leaving customers in the country with only one smartphone option for the time being. The phone is expected to launch on Sprint in the United States as soon as next month, but no date has been set in stone, as Sprint hasn’t yet confirmed the details of its promised May 5G rollout.
​From: VentureBear