The platform supports all laser processes in MicroLED display manufacturing with the high throughput and precision, and low cost of ownership, needed for volume production requirements. The microCETI platform is available in three different configurations, enabling cost-effective transfer, lift-off and repair of MicroLED devices. Its high speed enables the transfer of hundreds of millions of MicroLEDs per hour without having to apply mechanical forces — up to several orders of magnitude faster than other approaches — while the on-the-fly square-beam laser enables transfer of nearly any shape and size of MicroLED. 3D-Micromac has already received multiple system orders for the microCETI platform from leading MicroLED chip manufacturers in North America and Asia for laser lift-off and transfer processing. The MicroLED fabrication process is vastly more complex than LCD and OLED manufacturing and faces several technical challenges that must be overcome before MicroLEDs can be readily available in the mass market. The major challenge is detaching and transferring the processed MicroLED chips from the donor or growth (e.g., sapphire) substrate to an intermediate substrate for subsequent testing, allowing the expensive growth substrate to be repurposed for future use. Another challenge is to quickly and precisely transfer the chips to the final glass backplane, which for a typical 4K display involving tens of millions of MicroLED chips could take hundreds of hours using traditional pick-and-place transfer methods. Technologies are also needed that can detect and repair/replace defective MicroLEDs during the manufacturing process, since a pixel yield rate of 99.9999percent is required to produce a full-HD desktop display. The microCETI platform from 3D-Micromac supports all laser processes in MicroLED display manufacturing, with the ability to address precisely these challenges.

According to Uwe Wagner, CEO of 3D-Micromac, “MicroLEDs have enormous potential for future displays across a wide range of applications and end devices, including indoor and outdoor signage, smart watches, augmented and virtual reality headsets, and automotive heads-up displays. As a leader in laser micromachining, 3D-Micromac has extensive experience applying innovative laser technology to new and emerging applications to support their volume-production requirements. Our new microCETI platform provides a high-throughput, versatile and cost-effective laser micromachining process that is ideally suited for the production of MicroLEDs. We look forward to working with MicroLED device and display manufacturers to accelerate the adoption of this exciting and promising display technology.” The microCETI platform is available in one of three configurations:


Soft-EPi announced that it has made red LEDs using GaN on a sapphire substrate.
Most of red LEDs are made with aluminum gallium indium phosphide (AlGaInP) or a fluorescent substance, which is not only more expensive than GaN but tend to lose their effectiveness as they become smaller and are also less efficient than blue.
Red LEDs based on GaN are relatively cost effective and have excellent mechanical strength and highly reliable. Although there were cases when red LEDs were developed through special techniques such as ‘nano-rod’, none of the developments came close to mass-production. 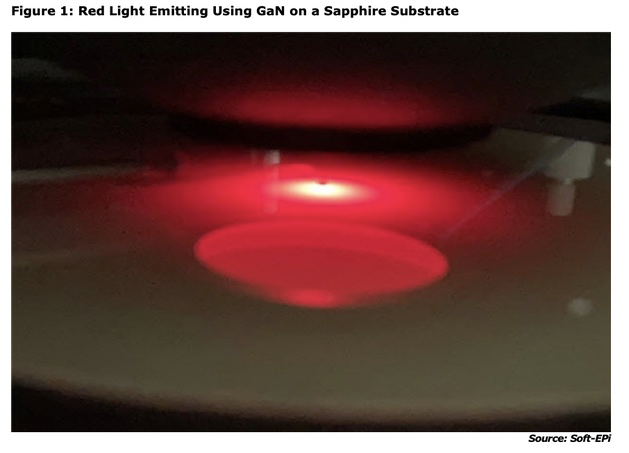 ​“GaN-based red LED requires advanced techniques such as injecting indium into active layer and increased current density causing short wavelength.” said a representative from Soft-Epi. The company emphasized that its technique overcomes many existing limitations. “Our technology has been developed through stress control technique and highly-concentrated indium injection technology.” said CEO Hwang Seong-min of Soft-EPi. “Our technology also allows MOCVD (metal organic chemical vapor deposition) production lines that are used for blue and green LEDs to be used for red LEDs as well.”