DSCC released its Quarterly Advanced Smartphone features report and highlighted the growth in OLED panel shipments and OLED revenue. In 2021, smartphone OEMs are expected to purchase $33B in displays, while OLED TV revenues should reach ~$7B, putting OLEDs at $40B in 2021, `30% of the global display market.

Apple was a slow starter with OLED, adopting the technology in late 2017 after Samsung Mobile paved the way.  In 2018 two iPhone models had OLED displays, and last year all iPhones sported OLED displays. The Apple Watch also uses OLED an OLED display.  What DSCC’s data shows is that once Apple gets started, there’s no stopping them. In 2021, Apple is expected to buy $18.7B of OLED displays, up 64% Y/Y. Samsung Mobile the OLED pioneering OEM’s spending on OLED displays will be flat Y/Y at $8.4B even as they ship ~5m foldables with a display cost of at least $125 per panel. 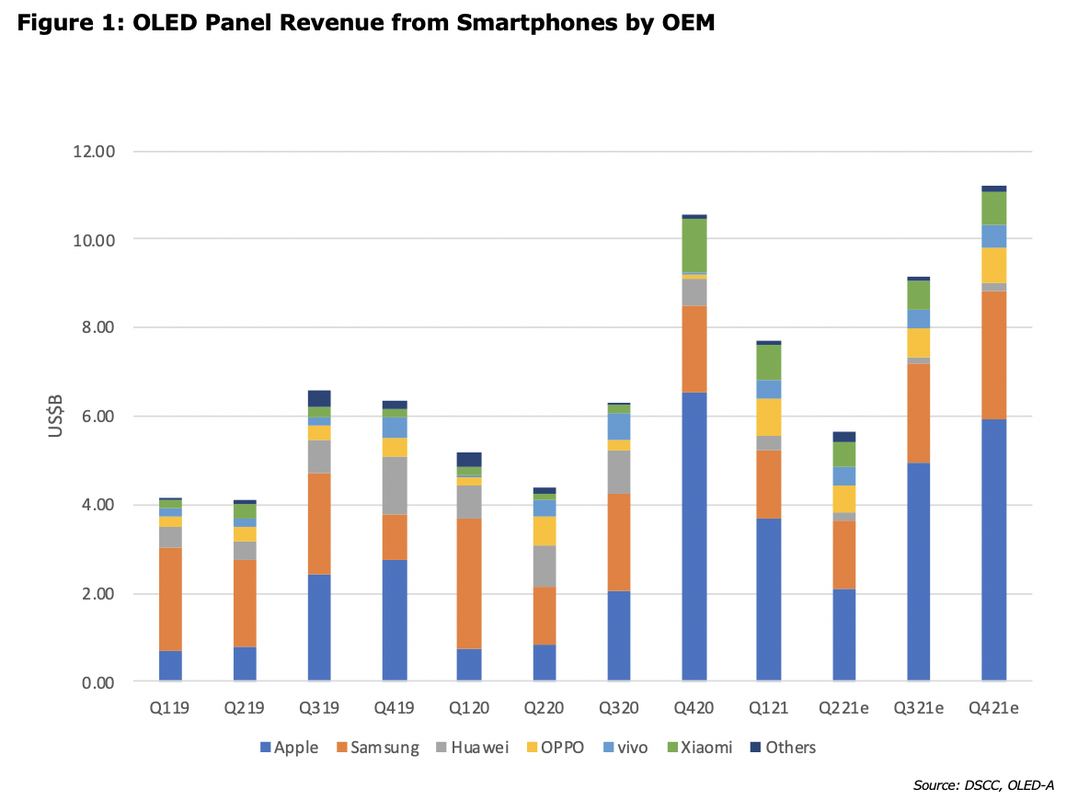 ​Apple continues to expand its interest in OLEDs and is expected to offer a 10.86” iPad with an OLED screen by 2022, according to TheElec. The OLED display will use a rigid format and LTPS. The following year, in 2023, Apple is planning to launch an 11-inch OLED iPad and a 12.9-inch OLED iPad. Apple will likely apply different OLED structures for the iPad launching next year and its successors in 2023. The 10.86-inch OLED iPad launching next year will use rigid OLED and thin-film encapsulation (TFE). TFE is a technology has been used with flexible OLEDs. Next year’s iPad will use LTPS and side by side RGB, similar to the OLED structure used 2020. Apple is expected to switch the Pro to LTPO in 2021 and the iPads launching in 2023, in could use flexible OLEDs and LTPO. They could also adopt a “tandem” flexible OLED, which would increase the luminance by 2X, while holding power consumption the same.
Apple had used flexible OLED for its iPhones since the iPhone X debuted in 2018.

The company is using rigid OLED first for the iPad as the larger 10-inch range OLED panel size. What technologies Cupertino plans to apply for its OLED iPads going forward will determine spending plans to Samsung Display and LG Display for their OLED production capacities. The report is consistent with Samsung Display’s plan to build a Gen 6 or Gen 8 OLED fab for the IT panel business Samsung Visual expects to ship 1m OLED notebook displays this year. By 2023, Apple plans to expand its iPad offerings to 11” and 12.9” using flexible OLEDs and an LTPO backplane structure. 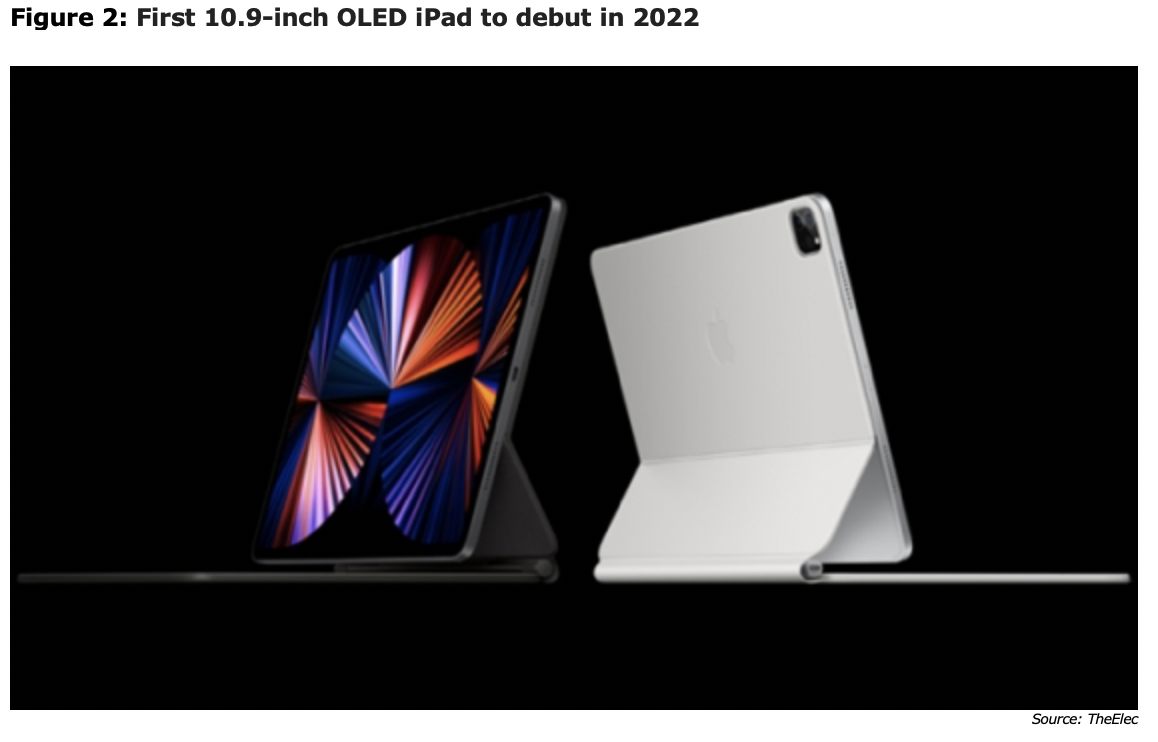 ​SDC has been the beneficiary of this increase in demand for OLED smartphones and over the last year SDC’s shipment volume should reach 458m panels, up 23% Y/Y, slightly less than the industry which is expected to reach 656m panels up 30%. Samsung lost some share over the 10-quarter period starting with a 91% share and ending with a 71% share, but that was to be expected as Chinese panel makers ramped up and Chinese smartphone OEMs made more use of OLEDs.