Vertical Divider
2020 Shipments of the New iPhone SE to Exceed 15 Million Units
May 04, 2020
​
The next-generation iPhone SE has been launched after many rumors and leaks over the last three years and is the successor to the iPhone SE released in March 2016. According to Counterpoint Research, 2020 shipments of the new iPhone SE could exceed 15 million units. The device was initially expected to launch during March 2020, but the launch was delayed due to factory shutdowns in China amid the ongoing COVID-19 outbreak. Factories in China are nearing full capacity and Apple’s manufacturing partner have brought this device to market given that Chinese factories were closed for almost two months during the factory ramp-up phase.

While many markets have shifted focus to the 5G smartphone race, Apple delivers one last shot at a mid-range 4G LTE before finally shifting towards a 5G-heavy portfolio. Global network operators are focusing on the faster throughput speeds and the better economics of 5G networks, but there remain many hurdles and work to be done, including spectrum acquisition, investments for tower upgrades. Apple will have a 2-3-year window before a majority of 4G LTE users finally migrate to a 5G network, even in the developed markets. The iPhone SE taps this window of LTE opportunity for Apple. By foregoing 5G, Apple was able to price the SE at $399 instead of at least $450. It also would have been challenging to fit the extra 5G components into the SE’s tight, aesthetic 4.7” package. Finally, with the latest A13 Bionic CPU, Wi-Fi 6, and a modem that supports GB LTE, it should be sufficiently powered for most users, even though it lacks 5G. The device is likely to be a mid-range “cash cow” for Apple for the next 2-3 years. The new Apple iPhone SE has a 4.7-inch LCD screen, Touch ID fingerprint recognition, and a design similar to the iPhone 7 and 8 series, with a single camera on the back. The A13 bionic chip means that it now has one of the best-in-class chipsets, which is comparable or better than many Android flagships. Apple’s A13 was a large upgrade over the A12 chipset used in iPhone XR models. It is based on the 7nm chip architecture which is more optimized for machine learning operations. In Q1 FY20, Apple’s revenue hit an all-time quarterly high of $91.8 billion, up 9% YoY for the three months ended Dec 2019. Out of the total Q1 FY20 revenue, $12.7 billion came from its service segment which accounted for 13.8% of the total revenue.Figure 1: Lifetime Software & Services ARPU for iPhone Users 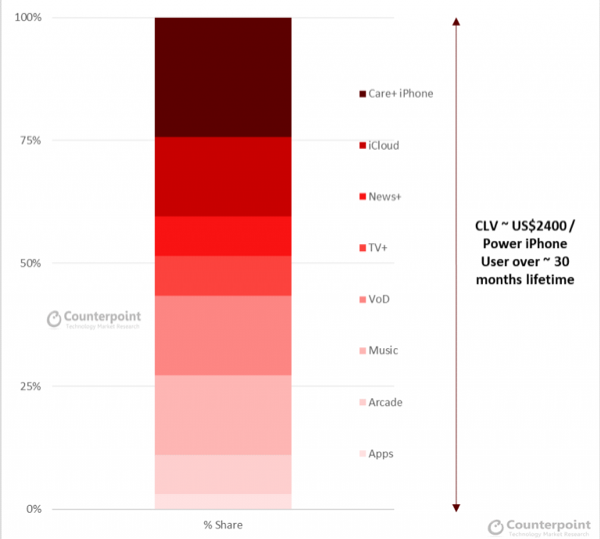 Although the market is rapidly shifting towards higher device specifications (including >6-inch display, multi-camera setups, 3D face unlock, AI features), there is still a segment of consumers who still feel more secure with a fingerprint unlock and a screen size that fits well in the palm. On top of that, some of these consumers are previous generation Apple users who are nearing the end of their device life cycle. These users are seeking high brand value with good performance without paying $1000 or more – especially in world in which normal economics have been altered by the coronavirus.
​
Apple iPhone SE will consolidate the demand for existing older generation iPhone 6/7/8 series models towards a single device – iPhone SE. This will also enable Apple to maintain a leaner 4G LTE portfolio while it transitions to 5G. Meanwhile, other global OEMs will face stronger competition from Apple in the mid-range. For example, iPhone SE will compete strongly with Samsung’s Galaxy A series, LG’s ThinQ series, Motorola Z series, and the upcoming Pixel 4a series. A budget category Apple device is often considered as a device targeted for Asian and Latin American markets. However, these markets have shown modest uptake of existing Apple devices in the $400-$600 price band in the past. The aspirational value of the Apple brand remains high in these markets, but these markets have remained highly competitive and consumers tend to lean towards buying a device that offers higher specifications. The consumers in these markets also pay a significantly higher cost for Apple devices due to additional customs duty, currency fluctuations, supply issues, and other local taxes. For example, Apple iPhone SE is priced at $550 (approximately) in the Indian market. iPhone SE may still end up competing in the premium category in these markets. Having said that, the iPhone SE may still manage to gain significant traction given its latest hardware. The primary target market of iPhone SE will be North America, Europe, and Japan, markets where the iPhone 7, 8 as well as the iPhone XR series continue to rank among the best-selling models. The timing of the iPhone SE launch is not favorable. Carrier stores in North America, Europe and some other parts of the world remain closed due to the COVID-19 lockdown since mid-March 2020. This means Apple may lose out on some initial launch push, but sales will gradually pick up in H2 2020 if the COVID-19 situation continues to improve.