MicroLED are challenged in a number of areas, including cost, non-LED performance transport TACT and increasing yields needed for volume production, especially in the case of mass transfer tools. LED fabs will necessarily come to resemble high-volume silicon fabs, with end-to-end yield management, Class 10 and more advanced process control. At the wafer level, testing for electroluminance in addition to photoluminance is necessary to fabricate near-perfect displays.

To transition from  MiniLED to MicroLEDs, foundries and fabs must step up their game considerably. “Achieving the performance and cost point for MicroLEDs will require a paradigm shift towards a semiconductor manufacturing mindset,” said John Robinson, senior principal scientist at KLA. Robinson pointed to the need for extremely high MicroLED yields compared to conventional LEDs, including high driver IC and backplane assembly yields, which requires end-to-end fab-wide defect management strategy. In addition to in-line yield management improvements, MicroLEDs currently do not have a production-worthy process for quickly transferring MicroLEDs from wafer to interposer or wafer to backplane. This process, a full-scale replacement of pick-and-place tools, is currently a great limiter to the manufacturability of MicroLEDs. 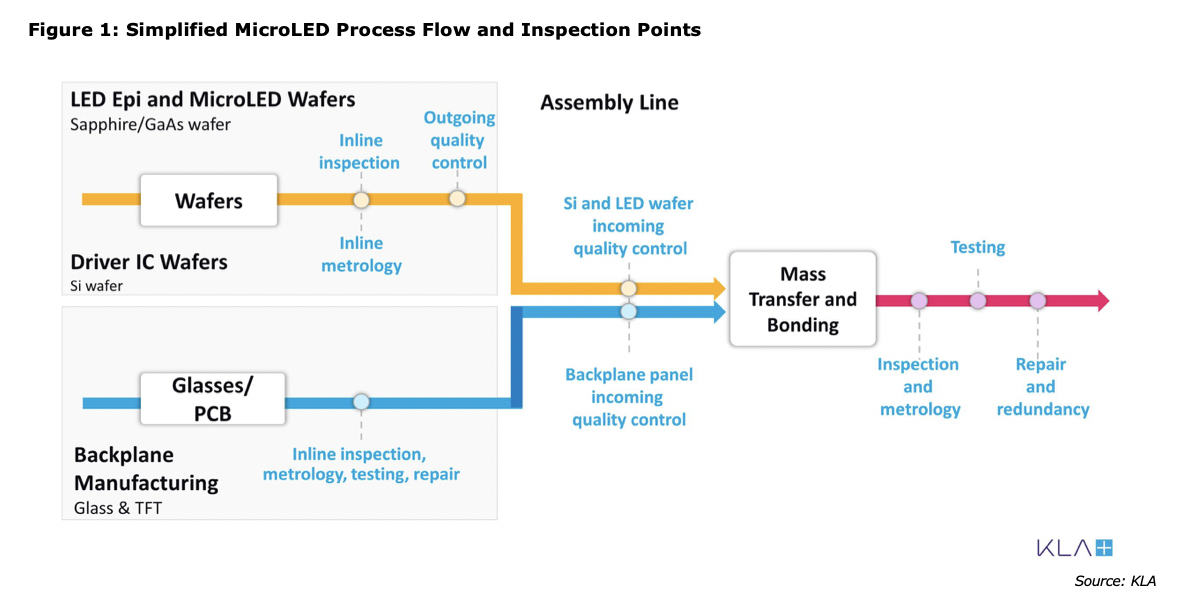 From the wafer processing side, Srinivasa Banna, vice president of MicroLED R&D, Lumileds said that in addition to reducing defectivity, which contributes directly to yield, MicroLED fabs must maintain very tight wavelength uniformity control on both the epi wafer and across the finished panel. On the testing front, Banna added that while many solutions exist to do photoluminescence-based (PL-based) testing, which measures the spectral properties of the light, including desired wavelength, at epi and processed wafer levels, wafer-level testing of electroluminance (EL) is badly needed. “The ultimate proof is whether the LED lights up properly or not. We want to be able to a-priori mark the bad MicroLEDs, or the ones with insufficient light emission, and selectively choose the known-good-die for transfer to the backplane.” In lieu of wafer-scale EL testing, test structures provide data, “but this really only gives us a go/no go response,” he said.

“One of the greatest challenges is the lack of standard manufacturing flows and the diverse range of approaches that are being taken. This leads to a lack of scale to drive equipment development for high-volume manufacturing,” said David Haynes, managing director of strategic marketing at Lam Research. “In the short term, we expect to see increased commercialization of small, high-brightness MicroLED displays in AR/VR and other consumer products such as smart watches, as well as MicroLED light engines for automotive displays and large-area projection.”
​
Haynes noted, however, that the timeline for commercialization of large area displays on TFT panels “will depend on how quickly the industry develops mass transfer technologies that can deliver high accuracy and exceptional reliability.” Indeed, Apple’s latest iPad, which uses white MiniLED for backlighting, requires the accurate placement of 10,000 emitters, which sounds challenging enough. Positioning 25 million red, green, and blue subpixels on a 78-inch TFT panels for a 4K TV, with a tolerance of only 10 non-functioning pixels, will require an exceedingly robust, highly accurate transfer method.

The difficulty of mass transfer and performance issues as MicroLEDs scale has led companies to pursue different paths to obtaining red, green, and blue light on the same panel. There are also the differences in drive voltage between red (1.7V threshold voltage), green (Vt of 2.2 V) and blue (Vt = 3.3 V), which complicates the design of driver circuitry. All this can be simplified by fabricating only blue MicroLED wafers and adding phosphor or quantum dot color converters to make red and green.
However, Lumileds’ Banna said there are tradeoffs to down-converting, as well. Often, some blue bleeds through the converters, and any down-conversion reduces brightness. Quantum dots are semiconductor nanocrystals that can produce monochromatic red, green and blue light and therefore have the potential to be used in future MicroLEDs. However, today’s QDs are used in layer form to improve the brightness and color gamut of LED-backlit LCDs.

The front end of the MicroLED process begins by growing the epi stack on wafers via vapor phase epitaxy in metal-organic CVD tools (MOCVD). The wafers are then automatically inspected for defects and photoluminescence (PL), or spectral properties are measured.
Next, lithography patterning defines the N and P contact pads, followed by transparent indium tin oxide (ITO) deposition, which spreads the current across the surface of the device. Reactive ion etching (RIE) then exposes the contact pads. The wafer is flipped onto a flexible film, laser lift-off removes the substrate, followed by flipping again, measuring PL and EL and creating a known-good-die map. Next, hundreds or even thousands of MicroLEDs are transferred via stamp process, laser process, or other means (explored below), and bonded to a separately manufactured TFT or CMOS backplane that contains matching electrical contacts and control circuitry to that on the chip.

SMT bonding processes, using solder deposition and reflow, bond the chips to backplane, followed by AOI, PL, and EL testing again. If defective chips are found, lasers can be used to remove and replace the bad die (called repair), followed by final test of the display including electroluminescence and photoluminescence.

“The end product really drives our specifications for wavelength, film thickness, leakage current, and homogeneity,” said Ajit Pananjpe, CTO at Veeco. He noted that many of the new products being announced require wavelength variability within 2 nm. “Right now, we are close to meeting the wavelength uniformity specifications, and this is not likely to be a show-stopper for MicroLEDs.”

Optimizing wafer-level processes will be critical to ongoing improvement of MicroLED performance metrics such as the internal quantum efficiency (IQE), which is how efficiently electron/hole combinations in the device convert to luminance, and external quantum efficiency (EQE), which is how efficiently the device converts electrons passing through the LED to luminance. Up until a couple years ago, EQEs of red, green, and blue MicroLEDs were in the single-digit range. However, materials and device engineering have improved EQE to the double-digit range for blue, green and AlInGaP red MicroLEDs, with further improvements needed.

“We’re combining low power; steady state plasma etches with atomic layer deposition in the same module. These processes combine high throughput with the ability to significantly reduce plasma damage of the GaN surface,” Lam’s Haynes said. “On the deposition front, we have low-hydrogen silicon nitride passivation solutions, and in order to support compatibility with CMOS foundries, we are developing single-wafer cleaning solutions that are capable of managing gallium contamination on fragile wafers.”

MiniLED are in volume production today for applications in tablet backlights and keyboard backlights. To speed assembly, Rohini developed a bond-head that dramatically improves on pick-and-place by positioning the target substrate much closer to transfer substrate and integrating 3D metrology for positioning feedback. The process has been commercialized on the Pixalux bonder from K&S. Here, the MiniLED is flipped onto a flexible adhesive film and the substrate is removed. The film is flipped again and placed over, but in close proximity to the target substrate. The bond-head utilizes a high-speed pin actuator to transfer the chip at throughput up to 100 chips/sec.

“Given the similarity of MiniLED placement with SMT bonding, it’s no surprise that the adoption of tools such as ours is bringing production-worthy results,” said Subodh Kulkarni, president and CEO of CyberOptics. “For MiniLED placement, the system tracks minute deviations from the expected digital signature in x, y and z directions and quickly signals where there is a problem,” he added.

Rohinni, whose tool can be used on any assembly tool, is platform-agnostic, according to Rohinni CTO Justin Wendt. “We see ourselves really as a type of systems integrator, bringing a technology solution for a particular product, in this case MiniLED, to the tool makers and end uses who can best utilize it,” he said.

Mass transfer assembly
MicroLED mass transfer options include adhesive stamp transfer, laser-assisted transfer, electrostatic transfer, roll-based transfer, and fluid self-assembly. Though many techniques work (see figure 3), a transfer yield of 99.9999% (six 9s or 1 ppm), is needed for volume manufacturing. “Transfer technology is a greenfield today. Manufacturer cannot afford to transfer dead MicroLEDs, and even though repair strategies exist, they are too laborious and costly for use in volume manufacturing,” said Veeco’s Pananjpe.